-
The unfortunate part of this entry is this…the majority of people who would BENEFIT from this information, those that accompanied us on our 2 bus tours here in Ireland, will NOT be reading this. But it’s been a while since I…hauled…the…old…soap…box…out…for…a…go.

First off, let me say that it was a perfectly “large” day here in the Emerald Isle 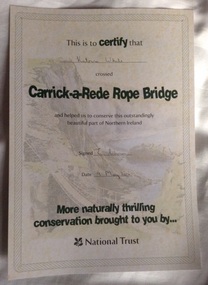 jpg
. And true to it’s nature, it was perfectly sunny and hot…yes, you read that right…on the Antrim Coast, when several other parts of Ireland were soggy and dull.

We took both our tours with the same tour company. Paddywagon Tours. Which was a bit of a risk…great if the first tour was good, but not so great if it turned out to out to be a disappointment.

Thankfully for us, our first tour to the Cliffs of Moher was fantastic, in spite of the less than stellar weather. We had such a fab tour guide in Val that we were thoroughly entertained during the many hours spent traveling to and fro.

Paddywagon Tours uses a couple of different pick up points. We met at that ever popular statue on the south side of the Liffey, the Tart with the Cart, Molly Malone. A harsh nickname, you say? A bit tough on the girl, you think? Well, did you know that Molly’s statue has actually turned GREEN in the “chest vicinity” from all the people rubbing that area? If that doesn’t say TART, what does??

The Cliffs of Moher on a Saturday was such a popular trip that we had an entire bus load from that pick up point alone. So when we arrived at our pickup point for the Giant’s Causeway on Monday morning, and there were only a few people there, I figured we were taking a “short bus” to Antrim. Not the case. They just picked up the majority of people on the North side, before stopping for us 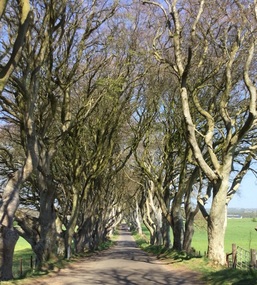 The Dark Hedges
. Needless to say, it was a FULL bus…well, full that is except for the 2 seats that the people behind us held open and wouldn’t allow anyone to sit in. They said they paid for 4 seats and 2 of their party had a family emergency and couldn’t come. Now, at first blush I thought ‘that’s a bit rude’, but then I gave it more thought and figured perhaps they had asked the company for a refund and were refused, which of course the website clearly states, so they figured “the bastards aren’t gonna sell the seats twice”. Shelley and I are were divided on what we each would have done in similar situations. But anyway, suffice it to say, that short of the 2 missing family members behind us, the bus was full.

Okay, 64ish people on a tour bus. No toilet facilities on these babies. Front and back doors for quicker disembarkation. So why is it that people are so slow getting OFF these buses. We’d be given 15 minutes for a photo op at any given spot. A site where we weren’t actually going inside. Sometimes just a road side stop with a view. Why oh frickin’ why do people then take 10 minutes to get off the bus?

**When the bus driver advises we will be stopping shortly at ______, that is the signal to get yourself ready to jump off the bus. Don’t wait till the wheels on the bus NO LONGER go round and round to stand in the aisle and decide what you will be taking off with you 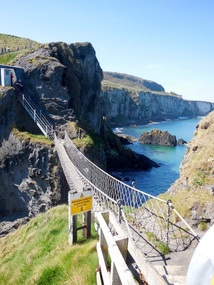 Our first stop was out to the Dark Hedges, which for non-fans like myself, is part of the new television sensation “Game of Thrones”. It was a long stretch of road covered in really creepy trees. Kind of a cool spot…and if everyone cooperates, everyone can get a photo of the really cool trees…and not a photo of other people taking photos of really cool trees.

**When you are taking a photo of a scene, stand back and let everyone get a nice photo…don’t walk right into the middle of it so that everyone gets YOU in their photo!**

We next headed off to the Carrick-a-Rede Rope Bridge. There is a kilometre walk from the parking lot to the actual rope bridge. It is a narrow, twisty, rocky path which you can accommodate 2 people abreast. So fine, you’re walking with your travel companion. The person who you need to encourage you to even walk across this 65 foot long rope bridge that bounces and swings in the wind. I get that. But this same path is used by those heading TO the bridge as well as those returning FROM the bridge. Would it be too much to ask that when you encounter people coming in the opposite direction that you make room for them?

**When traversing a narrow path, and you meet people, walk in single file. Cause really, who died and made you Queen?**

Then it was up to the Giant’s Causeway 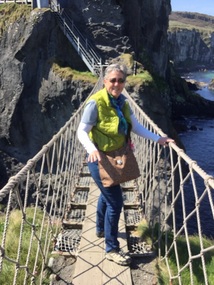 Yes, I crossed it...twice!
. We opted to walk down to the rocks via the roadway and return via the steep stairway up the side of the cliff. Probably not the wisest decision. Would have been easier to go DOWN the stairway and return via the roadway. But, hey, we were up for a challenge. Now, there is a shuttle bus that runs from the starting point down to the causeway area and back. In light of this, walking willy nilly, hither and yon, is not advisable. It’s best to use the sidewalk, cause that IS what it’s there for.

One thing I will say about both our tours is this: there were no absolutely rude people on either tour. You know the type...the ones whose personal agenda is more important than the tour's agenda. The ones who are continually late returning to the bus. There was the occasional straggler, but by and large, everyone was respectful of the schedule.

We ended our day with a short visit in Belfast before returning to Dublin. A couple of ciders in Darkey Kelly’s was a great end to a spectacular day. And luckily for us, no more bus tours…on this holiday, anyway.
Other Entries
-

I love your etiquette rules! You really should go on a travel show and educate people! What beautiful pictures!