-
“You have exactly one life in which to do everything you’ll ever do. Act accordingly.”- Colin Wright, authorCollectively, it took us 53+ hours, 22 of them spent in layovers, eight planes, two delayed, one missed, and a lot of faith for Chad and me to finally meet in the middle of nowhere. But meet we finally did, on the other side of the world, in Turkey. 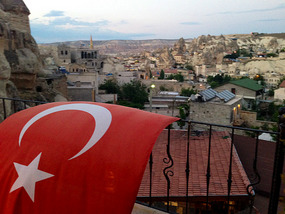 Gerome
Many years ago I watched Bob Simon on 60 Minutes take a hot air balloon through monasteries and churches carved into rock towers high in the sky. Had no idea where or what it was, but I knew I had to see it. Turns out, it was Cappadocia, a wild region in central Turkey, created by ancient volcanic activity that cooled the landscape into tall pillars, deep valleys and solid dunes. In these bizarre formations, dwelling were carved, frescos were painted and an endless religious battle began. On the Bucket List it went - Fairy Valley and Gerome Open Air Museum.So when the Biagetti Italian Family Reunion III was announced, Chad was invited, and the Eurasia adventure was on. Obviously. As the trip took shape, a theme appeared - we were staying in some unusual places: a cave, a Turkish over-night bus, a Trulli, and a sasso caveoso. 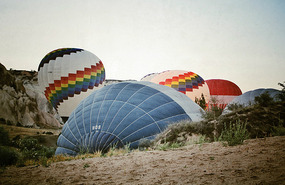 Blowing Up
We finally arrived Saturday night with a new passport stamp (#42), but also disheveled, delirious, and sleep deprived. Our disgust was quenched though when we saw our Grand Cave Suites. The land of Cappadocia is made up of pumice stone, soft enough for carving, and inhabitants, old and new, have gone at it. Our hotel is a more modern version, complete with plumbing and wifi, but a cave just the same. Rock walls, little light, a bed nook was cut into the wall. Then my first call to prayer went off as the sun set. I love that sound and it reminds me of my time in Morocco that I loved so much.After an incredible dinner of hummas, stuffed grape leaves, and squash blossoms on a patio overlooking this dreamy place, we called it a night, only to wake just 5 hours later to a 4am wake-up call for our Royal Balloon adventure. (Of course, we flew over 7,000 miles just to have a room next to two military families from Florida with no concept of quiet time or bottle recycling. And their children also seemed to multiply.) 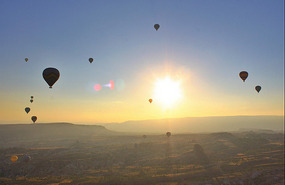 500m Up
I'd only been in a balloon once, and I bungee jumped out of it for my 21st birthday. So stupid. The more rational and mature me looked at the company's safety record before choosing. I had a few butterflies as Chad and I hurled ourselves into the enormous basket (not out of it), at dawn. Others from all over the world did the same in 100 colorful balloons surrounding us, all rising to different levels, floating about. It was incredible, really peaceful. 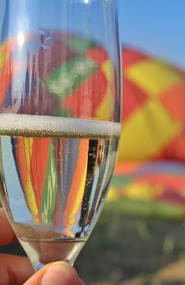 Toasting a Good Ride
Take off happens without even noticing and next thing you know, you're playing bumper cars with other balloons and constantly wondering how the hell this works, since the pilot can only control up and down. Chad quietly nudged me when he noticed one balloon lowering to a level that did not please him. We watched it swipe a tree and then chose to look away.

We too dipped low into rips in the ground, then sailed over Fairy Valley with stone pillars close enough to touch, and quickly we were 500m up. The pilots speak to each other over radio about their position, and they play songs and Morse code with the burners. The other balloons were just as stunning as the geography and rising sun, and we just quietly took in the 360* views. We were up there for an hour, and ended it with a champagne toast in a field.Bucket List: check. Welcome to Turkey.
Other Entries
-

Kristin, another chapter for your book! Hope you'll be more "grounded" in Italy. Have a terrific trip. Love, Peggie

The pics are amazing again I am so jealous. Thank you for letting me live vicariously through you.

Incredible photos as always. You are such a pro! Love your hotel and would definitely want to relax there. The ballon ride sounded breathtaking but a bit too adventurous for me. So glad you told us about it after the fact. Leaving later today and cannot wait to rendezvous with you and everyone later.
Love you xoxo

You amaze me! Have a blast - I can only visualize the two of you..Chad, Turkish cemetary could be on the agenda?

Incredible KR, just incredible. Green with envy as I sit in my cube here in office land. Enjoy and send more updates soon!

I remember the bungee jump well.