-
"Travel is the frivolous part of serious lives, and the serious part of frivolous ones."- Anne Sophie SwetchineWith the balloon ride bagged, we had two full days to see this awesome region full of natural wonders. First day we walked around our town of Gerome and in full sight, realized we we're in the middle of someplace special. Our hotel is carved into soft bullet-shaped stone pillar, with more popping up everywhere you look. Many locals live in these stone homes and have for eons. Look up and see tiny windows four stories up. 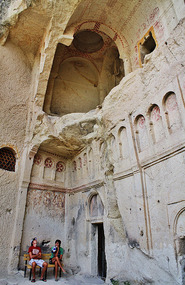 Goreme Open Air Museum, The Dark Church
The Gerome Open Air Museum is one small section of this massive landscape that was home to hermits, monks and later others who believed their religion was better than the others. The stunning frescos that paint the inside of the many stone churches were subject to vandals throughout the centuries who favored their god over others', and scratched out the eyes of Jesus.These churches are littered all over this desert region and you could stay for weeks hunting them all down.

With so much more to see, we ended up renting a car - which Chad would not let me drive. He fears my skills, and maybe rightly so, due to the fact that I whipped us off the Ring Road in Iceland, and nearly took a door off in a windstorm in Argentina. I was fine with being chauffeured. We drove down back dirt roads in small towns, found cemeteries, horses, other roaming tourists.The entire region is meant to be explored and you can pretty much go anywhere you'd like. 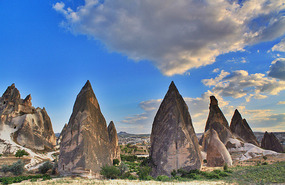 We hiked through Fairy Valley which we ballooned over earlier. Fairy chimneys, as they call them, jet up out of the sand and have tiny windows and ancient worn step holes to the top. Others look like tall, skinny mushrooms where gnomes might live.

We then drove down to the Underground City of Kaymakli where the ancient Hittite people dug their asses off for hundreds of years for storage space and a cool place to live. The Hittites were tiny, Ewoke-sized people and some tunnels were so low I was at a 90* angle to get through. Centuries later, Christians who lived in the area expanded the cities into massive labyrinths, eights levels deep, complete with wineries, in order to hide from persecution. Four thousand people could live down there for four months. It was insane. 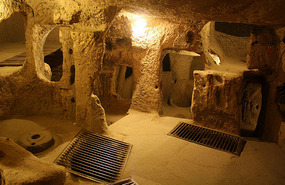 We were accosted by a guide, Shie, who spoke English, but spoke so fast we could not understand him. And it was as if he was on a prerecorded loop and literally repeated the same schpeel for each room, for 45 minutes. "These holes for hanging hammock," "This hole for communication, 'hello, how are you, goodnight'," and he loved talking about their toilet/compost system. At one point Chad was laughing so hard he excused himself down a creepy dirt tunnel just to regroup.

We drove on to a Greek village of Mustafapaşa that has relics of old mansions in disrepair. Many of them were abandoned in 1924 during the population exchange between Greece and Turkey when basically Turkey kicked the Greeks back to Greece and Greece kicked the Turks back to Turkey, all based on religion. 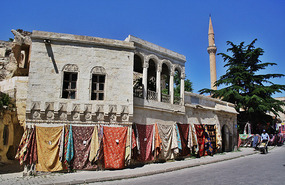 We returned the car - in mint condition - and ended our day back in Gerome where we made friends with a nephew and uncle carpet team who have been in the business for nearly 50 years and are natives of Cappadocia. They knew their stuff and did their job well, because Chad and I walked out of there with some new stuff.

The nephew took a shine to me and we saw him do a few drive-bys in his Peugeot throughout town. He stopped once and I stuck my head into the window to chat and he invited me to go see his horse. I stood up and saw Chad from a few feet away hightailing it towards me with a knowing, disapproving look in his eye, wagging his finger at me like Nancy Reagan to a drug addict. Oh, it was priceless. We saw the Peugeot drive by one last time as we boarded the overnight bus for our next destination. Inshallah. 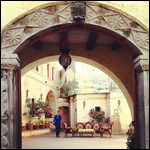 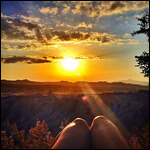 Awesome stories and hilarious ending. This place sounds amazing! Wish I was there with you.

loving it. one quick question - can you fold a map like Chad?