-
"I loathe the bus. There has to be a more dignified mode of transportation."

A 10-hour overnight bus is interesting. And by interesting, I mean kinda hot and shitty. It's cheap, clean and mostly comfortable, but there's no bathroom, 100 stops (unless you really need one), and snoring. Plus, no outlets, so when you're mid-epi of Game of Thrones and your battery dies, you go into full-blown panic attack. 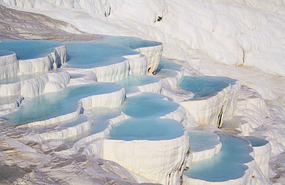 Pamukkale Travertine
Panic turns into anger as the silence is broken when behind you, an archaic cell phone goes off at midnight and the gigantic, deep-voiced owner of said cell phone answers it, only to have a conversation as if the person on the other end is in a tunnel. I don't speak Turkish, but I swear I heard, "Can you hear me now?" 17 times. Pretty sure he was from Florida.But some ambien helped dull the pain and the ride took us southwest to a new region and another natural wonder - Pamukkale.Hieropolis was an ancient resort town set on top of a hill near today's Denizli, first for the Greeks, then the Romans. In its day it was enormous with two theaters, gladiator stadium, temple to Apollo and housed thousands. The ruins are impressive, especially the coliseum, and a museum houses plenty of goddesses. What drew them here were the natural thermal springs and a massive, cascading mountain of baking soda - behold Pamukkale, the "Cotton Castle." 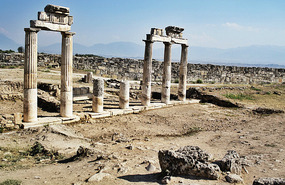 Hierapolis
Sodium bicarbonate spills over the cliffs making it look like a ski resort in early May. The spring water is pumped through, forming tiered pools as small as a quarter to as large as a swimming pool. The chemical reaction of the combo turns the water an aqua blue against blazing white bubbled walls and honeycomb-like foundation.They let you walk freely around this place, 24/7, with no railings or fences in sight. Apparently no one sues each other in Turkey. The water is lukewarm and the sand below soft as velvet, sometimes slimy. 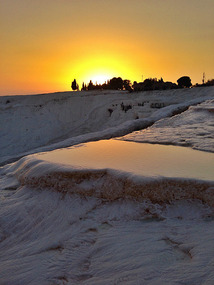 Pamukkale Travertine Sunset
We went at the end of the day to avoid the oppressive heat and masses of bus people, which left it pretty civilized. Yet you still see all kinds of humanity when water and sun are involved. You can nail a person's nationality based solely on their bathing suit choices. And most of them were taking selfies. Russians win for quantity, various Euros win for quality, the Koreans win for the ability to be omnipresent.We watched sunset from up there and before finishing day three in Turkey, I took in the World Cup game on the lawn of our hotel at 11pm with the hotel staff and guests from all over the world. Couldn't believe my eyes. Brazil = the Broncos. Brutal.Made friends with the hotel manager who surprised us with homemade sandwiches for our 5:45am airport shuttle for Istanbul, and bid us inshallah. Inshallah - I've missed that.
Other Entries
- 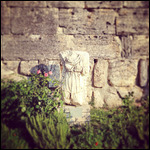 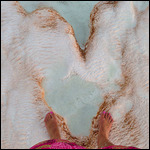 Five years ago I took an all night bus to Ephesus. My ride was better, even had a steward to serve food and drink. Those Romans sure got around. Have fun. I'm in Barcelona. I've watched Italy play in the World Cup in Italy, France in France and yesterday Tour de France while in France.

Love, love, love! That landscape is surreal. And the bus story made me shudder - and remember my overnight bus trip in Africa with goats and chickens. Yuck.