Heel of the Boot: Road Trip! (I Got to Drive)

-
“Our battered suitcases were piled on the sidewalk again; we had longer ways to go. But no matter, the road is life.”
- Jack Kerouac

Leaving Casa Ercole is not easy, mostly because it takes Italians a good 30 minutes to say arrivederci. But leave Chad and I finally did after a week of bliss, south down the autostrata in a speedy manual Peugeot on a road trip the heel of Italy’s boot, to continue the Bizarre Dwelling Tour ’14. 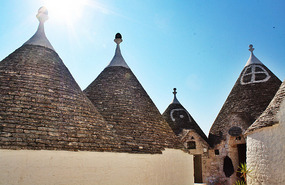 The road trip was based around the town of Alberobello in Puglia, an entire UNESCO site thanks to its abundance of 13th century trullis – circular white structures with pointy tops. It looks like an albino Smurf village. Black symbols on some of the roofs - suns, hearts, crosses, can be traced back to pre-Christian, solar, Jewish and pagan cults.

Two clusters of trullis, commercial and residential, are on small hillsides with rooftop terraces and little lanes weaving throughout. The commercial side was still awfully cute with friendly locals giving out bottomless samples of thick booze in so many flavors your stomach was confused, your head was pleased. 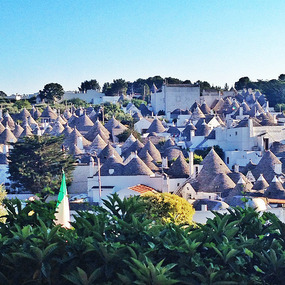 While getting gelato for dinner an Italian American man from Jersey – evident by his tattoo and hair covered arms and chest bulging from his worn wife beater – chatted us up. His father was with him and grew up in one of the trullis back in the 30s. I asked him what a winter was like and he shook his head and said, “not easy.”  They had no running water, plumbing, electricity or heat. Things have changed and our original trulli was equipped with AC and wifi. Bells from the cathedral behind us were our wake-up call.

Next, a last-minute find had us off for lunch in Ostuni, The White City. On the way I found a dot on the map for an archaeological site and we stopped at the Dolmen of Montalbano. Turns out it’s a tomb from the Paleolithic period just hanging out in someone’s property. We walked among fig and olive trees that easily could have been 900 years old, and broke into storage sheds. The only others out there were the buzzing saccades – very Blair Witch. 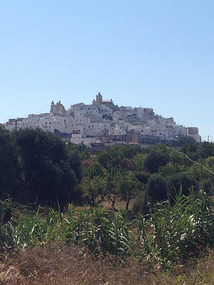 Turned out Ostuni was one of the highlights of the entire trip. Its historic core was pedestrian only on top of a hill with white washed buildings with green or blue doors and shutters everywhere you turned. Potted flowers may have been a town law. Tiny alleyways took you up and down and around, with a dumo in the middle – a mix of Italy, Morocco and Greece.

The south is extremely different than the north, flat, arid, filled with olive trees and surprisingly, cactus. Some of the small towns we drove through looked like Beirut after an evacuation. Granted, it may have been pranza, but the hot sun, uninspired architecture, all beige buildings, and empty streets gave off a much poorer feeling than the richness of northern Italy. 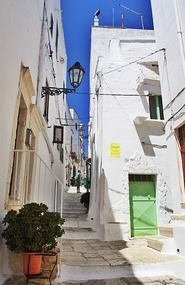 It’s hard to believe poverty exists in a country like Italy that is all about gluttony, but not that long ago there was a place of such squalor and filth, that Mussolini himself stepped in. Matera is the longest lived-in city in the world, with inhabitants dating back nearly 10,000 years.

The sassi are honeycombed dwellings carved into caves and made from rock up and down a ravine, creating a layered town with lanes on top of homes, switchbacks, endless stone staircases, elaborate cistern system, piazzas, cathedrals, rock churches and frescos back to the 11th century. You can get from the lower gut of the sassi to the higher piazza in minutes if you know where you are going, and have done your cardio. 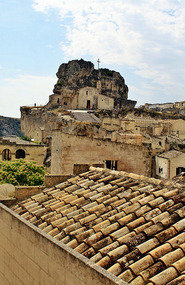 A writer visited Matera in 1935 and wrote about its foul conditions – people and animals living together, child mortality, open sewage – Italy was so embarrassed the government finally stepped in. Utilitarian communities were built and residents were forced out, leaving the
sassi mostly abandoned, except for those who refused to leave.

Recently though, people have moved back in, trash has been cleared, and some sassi are now trendy restaurants and boutique hotels. We stayed in a sassi with bunkbeds and an incredible rooftop terrace. Of course, it was in the middle of the sassi with no car access down and a mean staircase with no bellman. Check-in was comical. 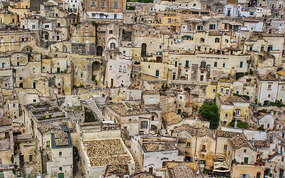 An Italian DJ was headlining a concert in the main piazza and the sassi was jumping. The next day – crickets, we had the run of the place. Matera is still rather unknown to tourists, which is shocking, because it was one of the most fascinating places I have ever been.

And for the record, I did 90% of the driving, and I fit right in. Americans invented the car, but Italians perfected driving. A Fiat may be in my future. Make that a Maserati. 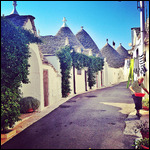 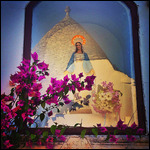 Kristin, once again you teach me about places I never knew existed! Continue having a safe, happy trip. Love you lots.

Keep up the great work! You have such great talent. So enjoyed your trip