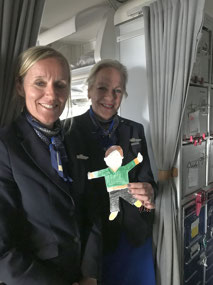 Flat Stanley and SAS flight attendants
description
It is a long trip from Kentucky. I am sorry I did not write you last night.  I had to switch airplanes in Chicago, Illinois with Mr. and Mrs. Rickly last night.  We were SO tired.   I went to sleep and did not wake up until we were in Copenhagen!

I got to meet some of the nice flight attendants on the SAS airplane that we were on from Chicago to Copenhagen.  SAS stands for Scandinavian Airlines System which is based in Sweden.  Then I got a photo in the Copenhagen airport jetway getting off the plane.  We took a bus to our hotel and Mrs. Rickly took another photo of me waiting for the bus.  We have been traveling a lot.     This country is trying to be “green”.  That means they avoid materials like plastics that are hard to recycle.  We bought a plastic bottle of water in Chicago and then got a “box” of water on the bus to our Copenhagen hotel.  Notice me in the photo with the box of water that is a cardboard container with a wax coating.  Even the straws here are made of paper and not plastic.  Maybe this effort will someday come to everyplace in America including your school.

Doing the overnight flight seems to be the start of most of our trips. 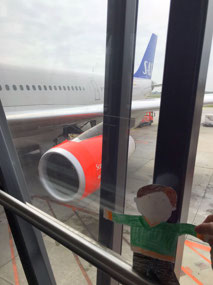 Flat Stanley getting off the plane in Copenhagen
description
We had looked at reviews of SAS before we took the trip and found many critical reviews.  Many of those criticizing SAS complained about the lack of beverages.  We followed the advice of one person who complained about not getting enough water and bought a couple typical-size bottles of Dasani water (@ $3.39 each) in the Chicago airport.  When we boarded, each seat had a bottle of water waiting for us.  About every 2-3 hours, someone walked through the cabin offering water.  So that advice wasn’t the best.   It was true that we were only offered soft drinks (Coke products..again) once without charge and even though it was an international flight, the beer and wine (which we didn’t drink) was an extra charge.  However, we were very surprised that we were fed a full dinner (roast beef medallions, fingerling potatoes, carrots, good rolls, OK basic salad, cheese, and a REALLY good “cream-filled cake”  about an hour after take-off.  They also came around with hot tea and coffee.  Then, about 1.5 hours prior to landing, we got a full breakfast and more hot tea.  So the complaints about service on SAS aren’t as bad based on our first experience.

Immigration in Copenhagen was quick and easy (maybe 15 minutes to get through.)  Once in baggage claim, we encountered 4-5 uniformed Viking Cruises representatives who checked our names and helped us get our bags and took us to a comfortable bus for the trip downtown to our hotel.  Larry got some Danish Krone cash out of an ATM in the airport but we didn’t want much and the minimum the machine would give us was 500 DKK which was in the form of ONE bill. 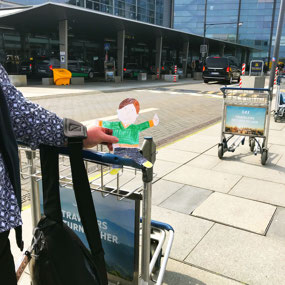 Flat Stanley outside the Copenhagen airport
description
We’ll need to get some change somewhere.

Viking puts us up at the Radisson Collection Copenhagen hotel which happens to be the original corporate headquarters building of SAS (and still has their logo as such on the top.)  We’re diagonally across the street from Tivoli Gardens and were getting good shots (especially at night) from our fifth-floor room (507).   We have a walking tour with Viking scheduled for 10:30am tomorrow but we might poke around Tivoli tomorrow afternoon.  After getting rather warm of the plane, the mid-60’s weather here (with sun) felt real good.  Tomorrow might be a bit windier but the weather is supposed to be about the same.

We needed to clean up and nap after we got here about 3pm and didn’t get our act together until about 7pm local time.  So we decided to eat in the hotel’s restaurant called “Café Royale”.  Our server, Donika, was marvelous.  We passed on the wine tonight and asked for ice tea which they didn’t have.  But Donika offered to make Larry her “sparkling lemonade” that she makes for herself.  That drink was especially refreshing.  Not feeling especially hungry, we split a ribeye steak, some well-seasoned roasted potatoes, and a spring salad with a sherry vinaigrette dressing.   We finished the night sharing some multi-chocolate dessert.  Even with sharing we still spent close to $100 USD for that meal (nothing is inexpensive here) but we felt quite comfortable.

After a quick pass at the Concierge desk to plot out some strategy for tomorrow, we gave it up for the day.
Other Entries
- 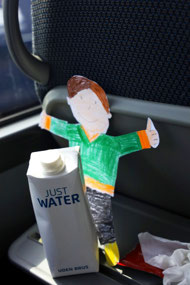 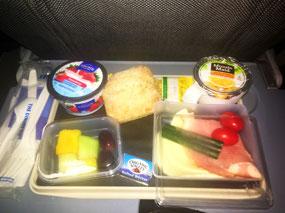 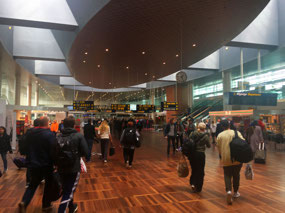 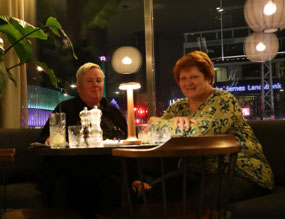 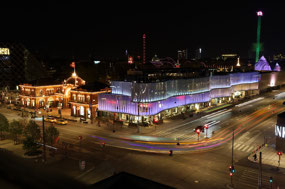