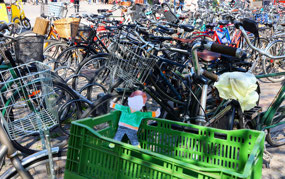 Flat Stanley wants to go for a bike ride
description
We had a busy day today.  We went on a walking tour of the city of Copenhagen today with a local guide.  It was good that the tour did not start until around 10:30am because it rained here until about that time.  After 10:30 in the morning, the sun came out and it was a nice day even into the evening hours.  The afternoon temperature got up to 64 degrees F which felt a little warm after all of the walking we did.  Well, actually, Mr. and Mrs. Rickly did the walking.  I get to ride along in one of their camera bags!

One thing that the Danish people use to save money, reduce pollution, and stay healthy is to get around the city on a bicycle.  Almost every road has a bike lane.  When you cross a street, you have to not only lookout for cars and trucks which might not be stopping properly for a red light, but also for the cyclists to insure they will not run into me.  I sat in the basket attached to one bike in a big group of bicycles, but the owner of the bike never came back to give me a ride. 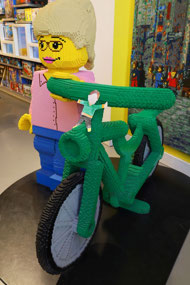 Flat Stanley rides a Lego bike
description
The bike was green, as tall as most bikes, and completely made of Legos!  That's right, I got to go to the Lego store here in Copenhagen.     Did you know that Legos were invented in Denmark in 1932?   In fact, the name 'LEGO' is an abbreviation of the two Danish words "leg godt", which means to "play well".  If something was built from Legos, you can probably find a kit for it in this store.   They have a set of buildings from a famous street here in Copenhagen called "Nyhavn".  I had Mr. Rickly take my picture by the Lego street.  However, we just finished a boat ride and we passed the real Nyhavn Street.  Check out some of the photos below from the canal boat ride we took that included passing beside the real Nyhavn Street.  Now how close does the Lego street look like the real street?


We started the day with a leisurely breakfast (fortunately part of the room rate) in the hotel dining room and then met our guide for a 10:30 walking tour arranged via Viking Cruises.  Our guide, Ulla, was a retired teacher with a love of the Danish people and their colorful history.  She wove our tour through some backstreets and plazas by the "Town Hall"and down busy shopping areas of some of the more-popular pedestrian streets.

Our first inside stop was the Copenhagen Cathedral called ‘The Church of Our Lady.’  The church was originally a Catholic Church, but in 1536 King Frederik III, abolished Catholicism during the reformation in Denmark. 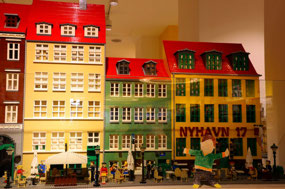 Flat Stanley by the Lego version of Nyhavn road
description
The church was stripped of all its glory, painted white, and declared the National Cathedral.  The beautiful Italian marble statues of Jesus, the angel, and the disciples by sculptor Bertel Thorvaldsen were added later.

One characteristic of life in Copenhagen is the large number of bicycles parked everywhere.  We learned that over 50% of the people of Copenhagen use bikes for daily transportation.  Every street seemed to have its own bicycle lane and the bikers fly down these lanes!  If you have children, you need a Christiania Cykler with a large wagon-like structure in the front to carry the kids.

Many of the original structures of the city have been destroyed over time by huge fires that swept through the city, burning the mostly-wooden structures.  Our guide was able to show us some of the older homes built around small central courtyards.  We loved the Round Tower that was constructed with circular ramps inside so the king to ride his horse to the top to survey his kingdom. 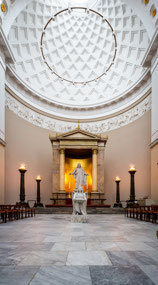 
Ulla pointed out a place to buy tickets and board when on the canal tour boats.  That information would be very useful not long after crossing a bridge over one of the canals near the boat dock.  We then walked through an opening in one of the buidings of the  Christiansborg Palace.  This huge complex houses the Parliament, offices of the Queen, reception rooms and the royal stable.  Originally this country was ruled by Kings, but power was turned over to a Parliament that rules in conjunction with the King or Queen.  The current ruler is Queen Marghethe II.

As we left the Palace area, Ulla headed back toward the hotel but we elected to leave her at this point and return to the canal boat dock for the one-hour canal tour.  We caught the next boat with less than a 15-minute wait.  These boats are rather crowded.  While we would have preferred a seat in the front, we were fortunate to find something along the starboard side.  The boat took us down a few more canals and then briefly out into the inner harbor before turning down another dead-end canal along the famous "Nyhavn" street.   The stereo-typical Danish colorful buildings line this street and many yachts and sailing vessels line the canal.  At the "deal end", most of the passengers on the canal tour boat exited and another load of people joined.    The boat continued the tour back out in the harbor passing a cultural center with an impressive sailing vessel docked outside and passed their relatively-new opera house. 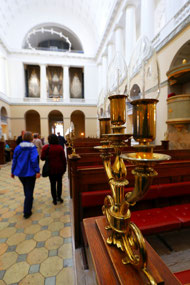 Organ and pew lights in the Copenhagen Cathedral
description


We proceeded toward the mouth of the harbor and passed a naval military museum on the starboard side with an old submarine sitting on pylons outside the water and a couple destroyer-class ships with one being, according to the guide on the canal tour boat, about a 1936 vintage.  We then passed major shipyard area called Refshaleøen which was once one of the largest shipyards in the world (but not in production at this time.)   As the tour boat captain turned the boat around to head inland along the opposite side of the harbor, we had a glimpse of our cruise ship, the Viking Sky, docked further out in the harbor along the west-side cruise ship terminal.

As we sailed back toward town, we passed the famous "Little Mermaid" statue but the photos from the water don't really conjour up the images most visitors imagine.  We'll try to get back down here from the cruise ship before it sails for more photos.  Before reaching the next canal, we had a view of the large copper green dome of Frederik's Church.  Presided by King Frederik V the foundation stone was laid in 1749 as part of a grand plan of making a new city district called Frederiksstaden.

We proceeded to re-enter the canal system passing more yachts and houseboats.  Many of the bridges under which the canal boat passed were barely high enough to accomodate the boat.  But the tighest bridge was our last one as we passed under Stormbroen Street.  The boat scraped the bumpers along the side of the bridge getting through it. 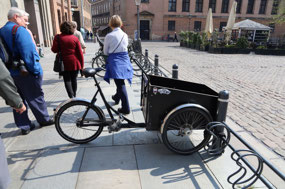 How to move your kids and groceries
description


We returned to our part of embarcation and tried out the "famous" underground public rest rooms that Ulla had mentioned during the walking tour.  These facilities apparently have people constantly cleaning them as they really were about as clean as we've ever seen public facilities.  From there, the walk to the Copenhagen Lego store was an easy walk.  If you ever wanted something made by Lego (created by a Danish inventor), this is the place!   The close-to-lifes-size Star Wars characters were awesome.

Since we hadn't had anything to eat since breakfast, we sought out a quiet second-floor restaurant on the way back to the hotel.  Maybe it was due to the "Hereford Beef" sign, but Hereford Village (also know as the Hereford Buffet) restaurant did have a good burger that Rox ordered and Larry had some grilled chicken.  Refreshed, we made it back to the hotel where Rox racked out for a short nap.

Around 6:30pm, we decided we couldn't leave Copenhagen without saying we visited the famous Tivoli Gardens especially since Tivoli was only a block away.

Iconically Copenhagen
description
So we paid our 130 DKK (aournd $25 USD) each to get in but didn't buy the "unlimited ride ticket".  We were a bit disappointed in the Gardens as we didn't see all that much "gardens" there.  Some clusters of flowers and fountains existed in spots that were quite nice, and of course, they had their amusement rides going.  But most of the rides reminded us of a 1960's amusement park with a few more-modern touches.  It seemed that the park was dominated by restaurants.  None of the posted prices appeared to offer any discount over restaurants on the "outside".  So it was difficult to understand if local people came here just to eat but paid the entrance fee plus the cost of food.  We were carrying a tripod thinking that we'd stay to get night-time photos.  But we concluded that the photo ops weren't as numerous or unique as we expected.  Having had a rather full day, we left the part around 9:30pm and called it a night. 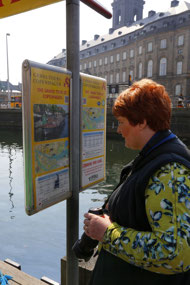 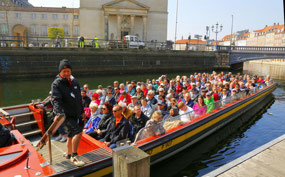 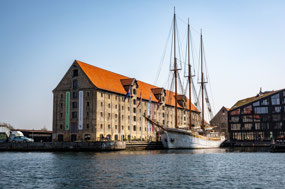 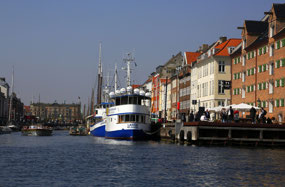 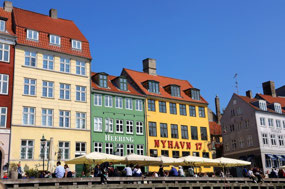 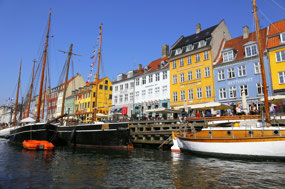 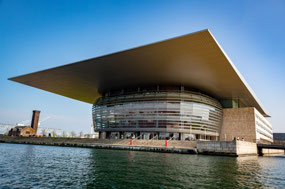 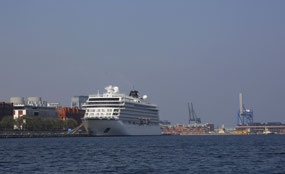 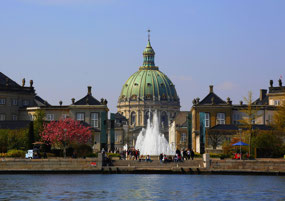 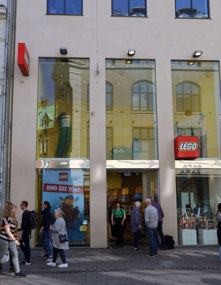 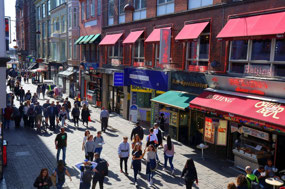 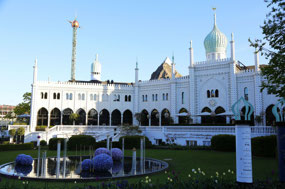 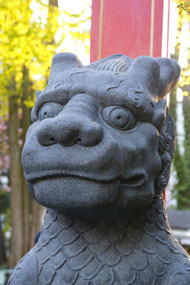 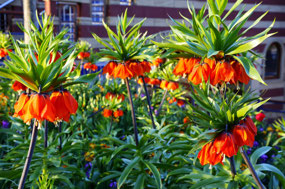 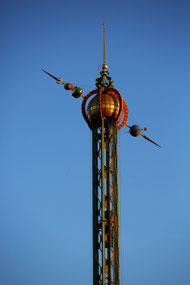 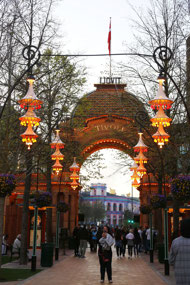