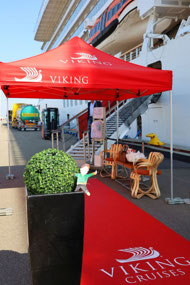 Flat Stanley pointing the way to get on the ship
description
But things are changing.  We are no longer in a hotel.   We are getting on a BIG ship.   The ship is docked at the cruise terminal port where we saw it yesterday while on our canal boat tour.   This ship is called the "Viking Sky" and is owned and operated by a company based in Switzerland called Viking Cruises.  This ship travels on the ocean between countries.
Today is embarkation day.  Embarkation is a big word meaning "getting on the ship".  You'll see me at the bottom of the gangway (no, we do not "walk a plank" like pirates did) and then with Mrs. Rickly as we entered the ship through an opening in the side.   We walked around the ship a bit and went up to the top as far as passengers are allowed to go.  The top deck is called the Sun Deck and we really were in the sun!  It's a really nice day here.  It is almost 70 degrees F which is the warmest day since we arrived.  We enjoyed pizza and ice cream for lunch.  (Is that what you had on Friday?)   The ship will not leave port until tomorrow, so we have an afternoon to unpack, get used to where things are on this big ship, and relax.  See you later!
--------------------------------------------------------------------------------------------------------------
We started today having to be sure our bags were ready to be picked up by 8am for transfer to the ship.   The porter was close to time and grabbed them at 8:30am.   We had squished everything but our Canon camera backpacks into the bags that they took so we had less that we had to watch. 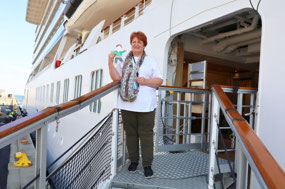 Flat Stanley and Mrs. Rickly boarding the ship
description
With most of our luggage now departed, we headed to breakfast at the Cafe Royale in the hotel.  As usual, we had more than enough to eat.   We had inquired yesterday about doing the "Castles of Copenhagen" tour that Viking had alluded in our pre-trip information was available during the Copenhagen "extension".  But as we got close to trip time, the only info we found about this tour was to take it on sailing day which is tomorrow.   Today has a good weather forecast and tomorrow is looking wet and cloudy.  So we asked at the Viking reception desk about doing this tour today.  They said it wasn't offered but gave us the name of an independent company that might do it.  However, we were then advised by the Viking rep in the hotel that we should "check in" with the ship at our scheduled time of about 11:15am.   We were also told we needed to be on-board by 6pm.    With all of those restrictions (which we weren't convinced were all true but not in a position to argue), we decided to give up on touring for today and reported to the bus at the scheduled 10:45am departure to leave for the ship. 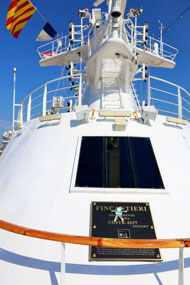 Flat Stanley sunning himself on the Sun Deck
description


The bus ride was uneventful and only had about a dozen people on board, so we arrived at the cruise terminal in about 20 minutes and moved through their security and check-in process quickly.   We received our "cruise cards" in the terminal and put them in the "badge holders" that we brought with us.   Boarding the ship was not much different than boarding an airplane other than we had to "badge in".  It made Larry feel like he was back at work again (since he also had an electronic "badge" at IBM and Lexmark for all the years he worked there.)

Rox wanted to crash and burn in one of their lounge chairs just off the first floor atrium.  Larry grabbed a camera and went to explore the ship.   He found most of the dining facilities and the spa with the "hot and cold immersion" experience (but didn't try it..at least, not yet.)  The buffet restaurant is called the World Cafe and is on the seventh floor (of eight total floors) in the aft section of the ship.  The Explorer's Lounge is forward on the same floor and provides a nice view of what's in front of the ship.  The sun was out and warm today so the top deck, known as the Sun Deck (which was appropriate for today), was a pleasant place.   On the way back to deck 1 where Rox was lounging,  Larry stopped by deck 3 and found our cabin to be open and apparently ready.  Uncharacteristically of previous trips, with nothing having been unpacked, Larry got some inside cabin shots that did not show a messy room. 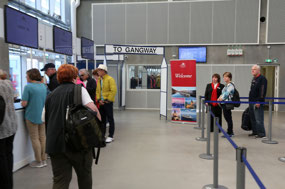 Checking in at the cruise terminal
description


Returning to the first deck to jolt Rox up from her deep dive into whatever she was reading on her iPad, Larry took her on a discovery trip around the ship.   When we got back to our cabin area, we found that one of the ladies had said our cabin was ready and we could leave our camera backpacks there.  The badge worked on the door, so we had a chance to get comfortable a bit ahead of the announcement at 2pm that all staterooms were available.

Having shed our camera backpacks, we decided to grab a little light lunch in the World Cafe.  This restaurant has two almost-identical serving lines, except the starboard side has a pizza station and the port side has a gelato station (both at the aft end of the buffets.)   Pizza and ice cream sounded like a good lunch which we enjoyed al fresco.

We returned to the cabin to unpack and rest.  We met one of our cabin stewards, Angga, who was quick to bring ice and said he'd keep the cabin frig stocked with non-sugary sodas for us.  You'd think since we didn't do that much today we wouldn't be that tired, but it seemed like it was time to crash again. 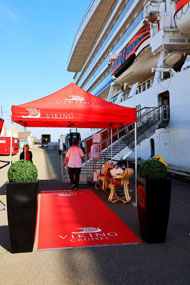 Rox boarding on the red carpet
description
Larry finished up some blog entries for yesterday and wrote the "Flat Stanley" one for today (he's done all of the Flat Stanley entries and photos so far; whose project was this?)  and then we zonked surprisingly deep until not long before our 7pm reservation for dining in the Italian-specialty restaurant called Manfredi's.

Fortunately, this ship doesn't require semi-formal attire for dinner provided you wear something like a "business casual" outfit.  We were seated quickly in a quiet back corner and looked over the menu.  One of our servers was Maria Desso who said she was from the Philippines.  We had read about the great rib-eye steak so that's what we both ordered although we asked for the half-sized portion (6oz instead of 12oz).  Maria really pushed the salads and pasta.  Rox did try a caprese salad and Larry went for an Italian pasta soup.  We both zeroed in on a carbonara pasta for the pasta course.   Rox got some seasonable vegetables but we really had more food that we could eat.  The steak was delicious but the pasta carbonara was the highlight of the meal.

Maybe we had too many carbs today, but we were already feeling sleepy (again) by the time we got back to the cabin.  With the weather being potentially lousy tomorrow, we think we're going to make it a relax-on-the-ship day, do some laundry, and enjoy (until the 5:15pm emergency drill).
Other Entries
- 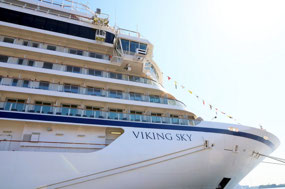 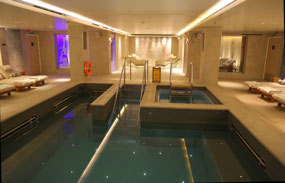 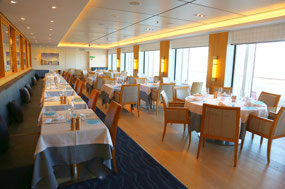 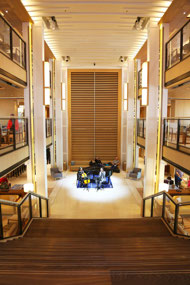 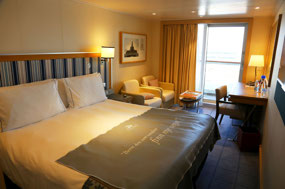