Visiting the Swedish island of Gotland 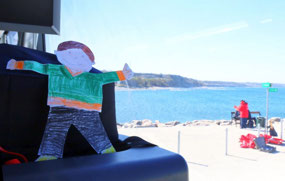 Flat Stanley on the tour bus in Visby
description
Visby is the capital city of Gotland.   This island is part of the country of Sweden but is found in the Baltic Sea east of the mainland of Sweden.  We are going on a walking tour of Visby on this cool (about 53 degrees F) day but at least the sun is out.
Anyone like the story of Pippi Longstocking?   Did you know that the author of that story was Swedish?  The author actually wrote the stories to entertain her daughter when she was sick one winter.  When a TV series about Pippi was being filmed, the producers of the series decided to do much of the filming in Gotland.  I got to see the place which they used for the outside of the "sweet shop".  It is really an apartment at #6 Fiskargrand street.  Other places were used in the TV show but we did not have time to visit them.
Like a lot of old places in Europe, Visby has many old buildings made from stone that are still standing after being built many centuries ago.  (A century is 100 years.)   One of those places is called the Gunpowder Tower.  Can you guess what was stored in this big stone tower?
We also visited a very old church that was built in 1225. 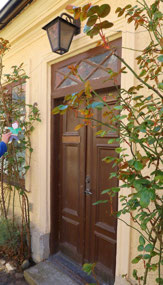 Flat Stanley at Pippi Longstocking's sweet shop
description
It is named Saint Mary's of Visby.  Because of the many candles being lit over time inside the church, the old white limestone walls had turned black and dirty.  Do you know what they used to clean the walls, both inside and outside?  Plain old bread dough!  The dough was allowed to rise and then rubbed on the walls to clean them and make the walls white again. Who knew?
Well, we did not have a lot of time to explore and the wind was real strong up on top of the ship.  So we said goodbye to Gotland and Visby as we sailed to our next destination.

Visby is the largest city on the island of Gotland.   Gotland is quite a bit bigger than our last stop (Bornholm)  which was 588 sq. km as compared to Gotland's 3,148 sq km. 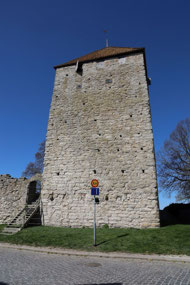 The Gunpowder Tower
description
Gotland's population is about two times that of Bornholm even though it's area is over five times as much.  Our tour never really left the old part of Visby so we don't have a feel for what the countryside or the more contemporary areas are like.
The buses discharged us at a park called Almedalen Park near their local university.  Across the park, part of the old city wall is visible with its arched gates.  Some concrete statues of ram sheep, laying down, are supposed to now guard some of the gates against attackers, which in this point in time, are cars and trucks.  Apparently when the tourist season is in full swing in the summer months, vehicles aren't allowed inside the walls of the old part of the city.

Ruins are everywhere.  The Gunpowder Tower is one of the more-famous and well-preserved medieval structures here.  A story told by the tour guide was that the roof of the tower would be removed and a fire started up there if attackers were known to be on their way across the sea.  It was a signal to the residents that they had about six hours to prepare to defend their town.

The white stone and black spires of St. Mary's Church is one of the more-prominent and well-preserved buildings.   Another story told by the tour guide was that a preservation effort on the mortar between the stones on the exterior of the church involved scrubbing the mortar with bread dough.  How much dough,  what kind of dough, and how you did that, were not specified, but the results looked to be successful. 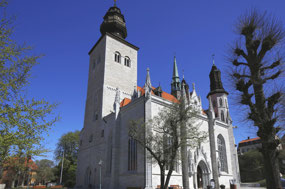 St. Mary's Church
description
Rox was impressed by the "Adam and Eve" plants near part of the altar and the tree with the ornaments near the large baptism font.   As the story goes, if a child was baptized there, the child could choose one of the ornaments (a glass angel) from the tree.

Of all the church ruins in this section of Visby, one of the more interesting pair was St. Lars and Drotten churches.  These two were the smallest churches of Visby, and pretty soon they were called 'The Sister churches'.  St. Lars (or Laurentius or "Lawrence") was established in 1046.  The churches are built only 100 meters from the big square (Stora Torget).  Rox said our tour guide told a story that these two churches were built (supposedly by their father) for a pair of quarreling sisters who couldn't get along and who wouldn't attend church together.  They subsequently each got their own church to attend.  [Still trying to confirm this story on the Internet.]

It was a good tour but crowded, quick, and difficult to get "uncluttered" photographs.  Fortunately, it ran a little ahead of schedule which let us get back in time for a sandwich at the Pool Grill (first hamburger that we had on this trip and it wasn't bad), and to attend a lecture by one of the resident experts on the area about the history of Estonia and what to see in Tallinn tomorrow.  We're going to have to get our act together early tomorrow since we are scheduled to arrive in Tallinn around 8am.  We booked an independent tour that's scheduled to start at 8am.  So, we're going to try some room service early in the morning and get down to the gangway about as soon as it's ready to let us leave.
Other Entries
- 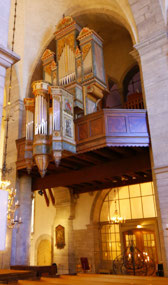 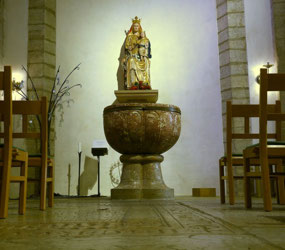 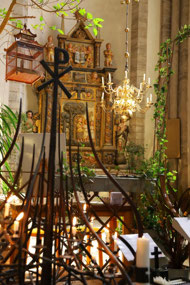 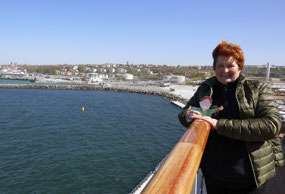 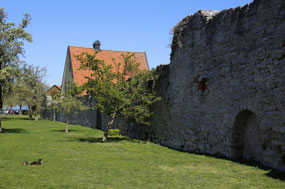 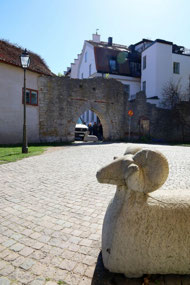 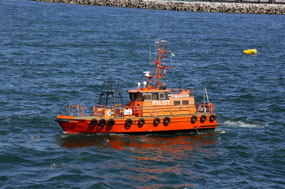 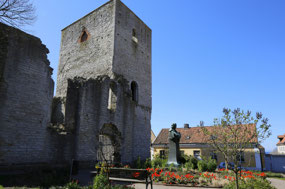