-
I was reaching for the clock to see the time when the alarm went off. Yes it was 4.00am. Straight out of bed or I would go back to sleep. It still took us 40 minutes to get ready even though we had pretty much done everything the night before.

The taxi driver was waiting for us when we went down 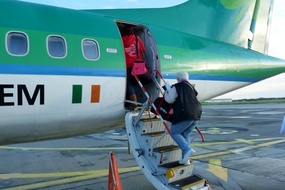 Boarding the plane at Shannon
. It was a quick trip to the airport at that time of the morning. We were told the fare was €35 when we booked the taxi, so I handed over my last €50 note and he gave me €8 back. I thought here we go, but no, he didn't quibble when I explained about the price. Nice bloke. We booked in with no problems. Together our cases weighed just under 40kg. Lucky they didn't weigh our hand luggage as it had the heaviest pieces in it. We are allowed the same weight on our second flight today with Flybe Airways. After that we really don't have to worry. The Trafalgar Tour is about 25 kg each and of course we are allowed 30 kg each on the flight home with Emirates. The desk where you can claim the tax you paid back did not open till 7.30, so we filled out our details on an envelope, put in our receipts, put it in the slot and hoped for the best.

Our Air Ararm flight was on a small plane with 2 propellers. I guess it would have held about 70 people. As it was there were 3 up the front, 3 in the middle and 13 of us up the back 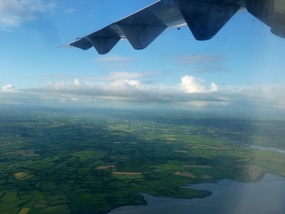 Goodbye Ireland
. Guess they have to proportion the load. You forget what the take off thrust was like. These days in the super large planes you hardly know the plane is moving. We felt it move this morning. We got our last look at the patchwork fields of Ireland before we became enveloped in cloud. It stayed like that all the way. We bought a sandwich and a drink. Edie also bought a nice little pendant with a Celtic symbol. It was about 8.20 when we arrived in a wet Birmingham. A bus took us from the plane to the terminal. It had been a smooth flight except for a couple of bumps coming thru the clouds to land.

We are now sitting in the terminal at Birmingham. The next leg of our journey is a flight from here at 12.55 to Newquay, arriving there at 2.05. We then pick up our car from Europcar and drive down to St Ives. There is very little general seating so we have been sitting in a cafe making our drinks last as long as possible. 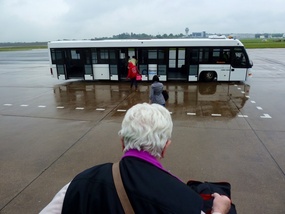 Hello England
. Flybe was having problems. Most of the check in was automatic but the terminals weren't working. We waited and finally decided to wait in a queue for a desk. They got the terminals started again and people were able to get their boarding cards and check their own bags. We stayed in our queue. We finally got to the front only to find out we were at a service desk, not an actual check in counter. The poor lady was ready to pull her hair out. We played the dumb tourists, not used to self check in and concerned about the weight of our cases. She said she would weigh them . One was 19.1 the other 20.2. We had to pull out our flight details again to confirm that we had prepaid for booked luggage and finally she must have thought the only way to get rid of us, was to process us thru, so that's what she did. This had the TV show about Tiger Airlines written all over it.

We lined up to board the plane. Everyone was putting on their hooded coats. Yes you guessed it, we had to walk across to the plane in the rain 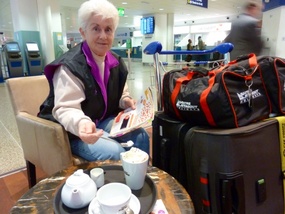 Waiting at Birmingham Airport
. Not a complimentary umbrella to be seen. It was the same sort of plane as the one from Ireland. It was a short uneventful flight and the clouds had broken up over Cornwall. They did give us a chocolate when we got off the plane.

We picked up the car. It would cost and extra £100 to have an extra driver, so we decided Edie would drive and I would navigate. We have a Ford Focus which has push button start and goodness knows what else. They don't give you a manual so you can find out. But we think it may have built in navigation. We could have used that finding our way from the airport to the main road. We had brought the rain with us from Birmingham. To cut a long story short, we arrived at Seaview Studio safely. I had a bit of trouble getting the key box to open, but we made it inside eventually. We dropped off our bags and went to a large Tesco near by and bought some supplies. The weather had cleared up and it was now clear and sunny, We returned to the cottage, turned on the telly, had something to eat and looked forward to an early night.
Other Entries
-

Looks like a very nice cottage!.
I know what you mean about Tiger Airlines!!--Photos lovely as usual.
Hope you have good weather as Cornwell is lovely- especially the little fishing village - like Polperro (can't remember how to spell it!!!).