Getting to the Yeosu Expo from Daegu

-
Many of us here in Daegu and beyond would like to goto the Yeosu Expo which runs till August but it seems getting there from Daegu is a bit of a problem. The Government did invest in building an extension of the high speed KTX line to Yeosu but that runs from Seoul. Going from Daegu however, is proving to be a challenge so here are some options

There is no direct KTX from Daegu. You would have to goto Daejeon, then transfer to SeoDaejeon KTX station by bus, taxi, or subway. From there catch the Seoul-Yeosu KTX line. Unfortunately many of these trains are already sold out from Seoul so you would need to book the Yeosu-SeoDaejeon leg well in advance. 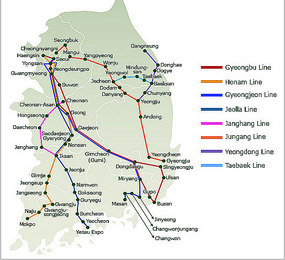 There is a slow train that runs from Daegu. However, there is only one train per day. Train No.1271 runs from Daegu to Suncheon departing at 13.33 arriving 17.51 for 15,100w each way. At Suncheon you can take a shuttle bus from the bus terminal to Yeosu. This requires an afternoon for travel each way and you wouldnt have enough time to see the expo on the day that you arrive after 6pm.


Or take the KTX to Masan then catch a bus to Suncheon. Some will continue to Yeosu or otherwise terminate at Suncheon, but I dont know where the bus terminal is in relation to the KTX Station
http://www.masantr.com/data/sooncheon.htm

Bus is the only real option from Daegu and the most problematic. There is a direct bus to Yeosu that runs from Seobu Bus Terminal. However, Seobu does not have a website for online ticketing and to see the number of seats remaining.

Seobu will only sell tickets the day of travel. Also I've heard they oversell and people have to stand in the aisles during highway driving for four hours! My ticket had no bus time or seat number printed so this is entirely possible 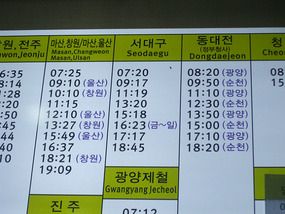 I was able to leave school early on a friday and take the 16.10 bus. However, it was completely full so the later ones must be even more chaotic. It took four hours driving on country lanes thru farmland, small towns, and downtown Jinju. Then it stops at Gwangyang twice and Suncheon before finally reaching Yeosu 4.5 hours later.

When I arrived, there was supposed to be a shuttle bus to the expo. Instead they put me on a local city bus (which are free during the expo). However, it made local stops, drove all around town, and never went to the expo so I had to take a cab back!

At Suncheon I also saw Yeosu Expo shuttles when I was at the bus terminal a few weeks back. However, nobody at the expo could tell me where to board these buses to go back to Suncheon?

An alternative is Suncheon. When I was in Suncheon they had frequent shuttle buses to Yeosu. However, there are only four buses to Suncheon (7.30, 11.30, 15.30, 19.30). These will pickup from Dongdaegu Terminal and stop at SeoDaegu for more passengers, so best to board from Dongdaegu.

The Suncheon bus is faster than the Yeosu bus as it's direct on the highway, and took me 2.5 hours when I came back from here once. The Yeosu bus will drive on country roads and make some local stops near Yeosu. Also for Suncheon you can view seats remaining and book online on the korean site. 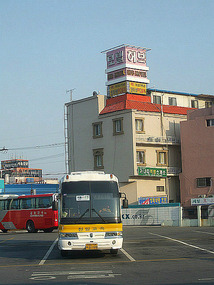 I also found out Suncheon has free shuttle trains from the Expo site to Suncheon station, or regular Munghangwa trains for only 2,600w.


Other bus options are to goto Jinju, Busan, Masan, Tongyeong, or Gwangju and catch a bus from there. Buses from Jinju stop early so if travelling after work from Daegu you have to make sure you dont miss the last bus from Jinju.

The Kobus site has some, but not all schedules listed. Seobu which has direct buses to Yeosu is not on the Kobus site.
http://www.kobus.co.kr/web/eng/index.jsp

The U Square site shows buses departing from Yeosu to Seobu (click on the big red button to the right). However, I can not get the reverse schedule for buses arriving at Yeosu?
http://www.usquare.co.kr/Local/yeosu.asp

There are two car rental places by DongDaegu station, Avis and Kumho. However, I've never rented one yet in Korea and it would only be worth it with more passengers to split costs. I budgeted renting one time, I think I was quoted 65,000w flat/day for a small four passenger car. You would pay for gas, highway tolls, and parking fees in addition. You also need an International Drivers Permit.

The car parking lots are another part of the town and you have to take shuttle buses back to the expo site. I dont know where these buses pickup/dropoff or their frequency.

I am hearing of tour companies running from Daegu. Unfortunately, their website and tours are all in Korean. I dont know a foreigner that has taken it, and my worry would be how to know which bus to get on, and where to board coming back. The tour bus parking lot was a zoo so I would have no idea which bus to get back on had I come on a tour bus??

So book with other foreigners, not alone, and keep the organizers cell and bus licence plate numbers so you can find each other to get back.
http://www.123tour.co.kr/ 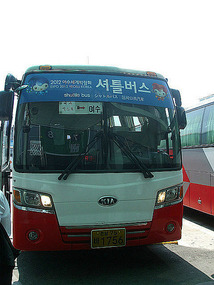 
I dont think joining a day tour would be worthwhile as with the lines for pavilions you wouldnt get to see much except for the less popular ones with no lines.

Accomodation is a whole other problem once you get there. During the holiday weekend we were able to find motels in Suncheon which has shuttle buses to the expo. Suncheon has many motels and even jimjilbangs around the bus terminal. We found rooms at 6pm (but maybe later they are gone) and negotiated two motel rooms for 50,000w so 25,000w each.

Nearby Gwangyang also has motels and shuttles to the Expo site, but a friend couldnt find rooms when they were looking at night. If you go early you should be ok. Or maybe grab rooms when you arrive, tell them you are going to the expo (exs-po guy-yo) and will return at night (bahm why-yo).

If you goto the other side of Yeosu you may be able to find a motel. I also saw a jimjilbang driving in town but not sure where exactly.


Since many foreigners from Daegu and surrounding regions want to go it would be a good idea to have extra weekend buses to Yeosu or special charter buses from Daegu for foreigners. Since nobody yet has taken the initiative on either of these it seems we'll have to navigate the many obstacles in the meantime trying to get to Yeosu!

I BLOG FOR THE KOREABLOG