"We aren't early – you’re late!" was my response to the company I’d rung who were providing our transfer to the airport for our 0855 flight to Hue 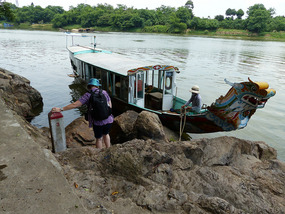 our vessel for the day
.

Our driver arrived moments after my call. We loaded up & were off. He only spoke as we approached the airport asking “domestic or international?”

We arrived at 0700, early enough so there were smiles all round as we bid farewell & headed to check-in.

A smooth flight which took 1h10m & I gotta say, I love Hue airport – no customs, no immigration, grab your luggage & go!

Ok Mr, be a bit more penny-wise with your transport decision this time because R is watching!!

Right, I know our hotel is about 15km away & ask at bus booth – “100k sir”, which is great, but the agent can’t give me the distance from the terminal to our hotel so we take a taxi for 220k knowing it’ll get us as close as it can 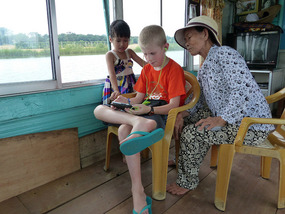 E with an audience
.

“Welcome, welcome to the Four Seasons!”

Michael, Mymy, Laura & Duong, the delightful staff greeted us like family, except for the huge hugs & kisses were missing.

Cold flannels (bloody refreshing across a hot face & rolled across the back of your neck), a platter of freshly cut fruit & cold drinks were offered with-in a minute of entering the lobby & they made sure we were comfortable before even heading upstairs to our room, let alone any paperwork was done.

After an hour or so of relaxing in our room it’s time to get amongst it & another walkabout so we head off to the river, about 2 minutes away & turn left. We were also on the lookout for the Post Office as we’d gathered a few mementos plus we decided we didn’t need a kitchen sink (slang for over packing). No need to cart excess baggage across Asia so best ship it home.

Now, me, being a radio guru pointed out to R that the large free standing tower full of antennas & dishes over there, yes dear your other left, that’s our goal – after all a lot of country post offices back home have a tower in their back yard for networking telephones across Australia 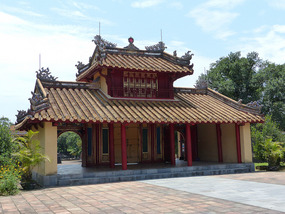 After 20 mins walking we approach our destination from the rear so we continue around the block to see, um, a TV station, HTV 01.

“Oh well, maybe it’s that other tower over there!”, I offer as some type of “it wasn’t my fault there’s more than 1 tower in this town.” The topic was soon dropped as it was approaching 1700 & that’s closing time back home.

As we’re near the Imperial Hotel we decide to have a gander (more slang for look around). Look we did up on the observation floor, great views but also noticing the smoke drift crossing the land. No doubt farming practices use this method here also.

We decide to have tea here & I get to try another beer label - l like this country but I’m yet to find a beer similar to the type I drink home but I’m not about to give up yet! 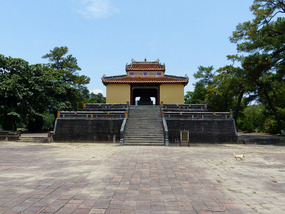 Minh Mang Tomb
. You see, we brought along some sheet music as he’s onto his Grade V exam later this year. All’s good & as it’s too far to run back for the music in our hotel room he smacks out 3 tunes from memory. Unbeknownst to us that would be the last piano he touched until we returned home. Although we stayed in other hotels with pianos we weren’t given permission again. I don’t think it really bothered him as much as his Mother but there you go.

Back to our hotel & we discuss tour options with Michael, deciding tomorrow’s activity is a boat tour up the Perfume River – too easy.

After a great brecky & endless cup of coffee our guide for the day arrived & we set off for the river.

Upon boarding the boat Mr Guide alighted & we were left in the hands of a pilot, a 3 yr old & I suspect her Grandmother 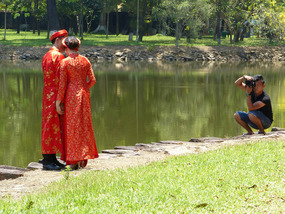 Cruising a river at a leisurely pace is so relaxing + you get to see things not seen from the land.

2 hours later we reach our 1st destination, Minh Mang Tomb. We spent an hour there wandering about, me trying to be a smart photographer but as usual, just leave it on auto son, works best.

I’m not the best to ask what I thought of sights like this…temples, pagodas, citadels – they just don’t register inside & they all become a blur, hence the camera & multiple SD cards. Even when I look at them now I need to refer to my daily journal as to what they are.

Killed 2 birds with the purchase of a floppy hat on our exit back to the boat as my cap didn’t cut it in the sun & it the hat was “Made in Vietnam.” Genius!

Next port of call was Hon Chen Temple. Honestly I’m discovering temples are as interesting to me as a Port Moresby merlot 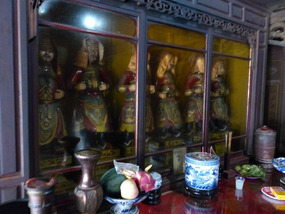 Hon Chen Temple
. I completely understand others upon hearing this will need to collect their jaw from the floor but each to their own.

Ok next stop was Thien Mu Pagoda. I actually photographed this as we headed upstream so to alight here & get more shots was a good thing. It was very popular too due to its proximity to the city – tourists of all ages including school kids who surrounded R & E asking many questions of the blond one. We noticed it’s also attached to a working monastery & I was entertained watching 10 ladies washing 100’s of sets of crockery in tubs & then stacking the dishes on top of each other on the tiled ground to dry.

Back on the water for the last leg of our journey. One thing I noticed in Hue is the number of unfinished building projects that ceased construction due to, I guess financial issues. They are an eye sore especially when they’re 6 storeys high.

Back in our digs we were again greeted with the biggest smiles, drinks & cold flannels 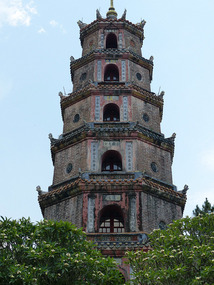 It’s all about service & this place is where Miss Happy Pants from Lai Cao railway station needs to visit.

It’s around now my watch reminds me it’s “beer o’clock” & fortunately, just a minute down the lane is the Risotto Café. Nothing beats sitting street side watching the world do its business with a beer in hand, especially at prices reminiscent of the mid 80’s.

R & E joined me an hour later & we decide to have tea there as I’m settled in & have struck up good rapport with the staff.

Now, we’ve been carrying a bottle of Bernoota (shiraz/cabernet from Langhorne Creek) with us for 3 weeks & after getting the ok from the café I head back & retrieve it to enjoy with our meal – bliss.

“What a day” I say as I lay my head down for the night, “what a day” ZZZZzzzzzzzzzzzz.

“You snored” were amongst the 1st things I recall wakening up.

“Time for brecky” I respond & damn if this isn’t the happiest place on earth. 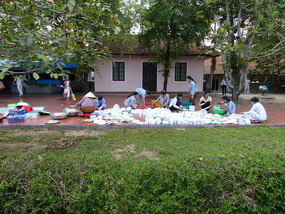 I don’t know how many but I’d be a rich man if I got a dollar for every knock back I dished out to the cyclos, scooter drivers, taxis etc.

In the 3 hours there we probably only saw half of it but the heat & our same same filters concluded that it’s time to make our way back. I part company with R & E as I need to buy train tickets for the next leg of our journey – destination Hoi An.

After studying the revolving timetables I’m confident of what train we need so up I step to the plate asking for “3 tickets to Danang for tomorrows train leaving at 1035.”

I think “3 tickets” was too much for Mr ticket man so he asked a colleague something like “I can’t understand this man, you take it from here” as they swapped booths. A little broken English was the best I could get out of him so he whipped out his phone & fired up google translate 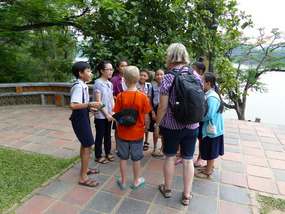 Look, we probably spent another 4-5 mins getting my request into Vietnamese but get there we did.

A-ha you’re all thinking. I carry a copy in my wallet so all’s sweet.

It’s about 2 km back to our digs & my watch had been chirping for hours – if you get my drift.

Eventually I’m back with rail tickets in hand so now to fire off a confirmation email to our digs in Hoi An who’ve offered a private car from Danang railway station.

No surprise we all head back down the lane to the Risotto Café for another excellent night of fellowship. As I’ve brought my camera this time I try some “arty” night shots which, well, thanks to digital technology, I can wipe away 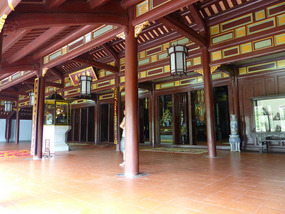 Thien Mu Pagoda grounds
. Funny that what I imagine in my head doesn’t translate on film (media).
Other Entries
-