A change in temperature! 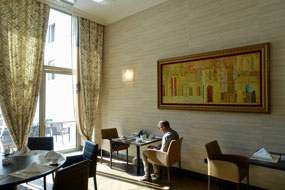 Breakfast at the Hilton
Gitti & Hermann had left to fly back home to Austria by the time we got up in the morning. Michael went off for his usual run whilst I took advantage of the large carpeted floor space, spreading the continental quilt on the floor to do a Pilates workout. It had been a while since I had done any good stretching or exercised my upper body, and so I confess to now feeling a little stiff — or was that perhaps from all the swimming the day before?
After breakfast, we packed our bags, checked out and then wheeled our bags around the corner to the main road through the town. Within a minute a taxi pulled up and we piled in. (The hotel would have organised a taxi for us for €15, but we of course chose to find a metered taxi. We rounded up the €6.40 fare to €8, feeling very pleased with ourselves for having saved €7!)
Michael had booked us business class flights from Podgorica to London via Rome, as they were only $70 more than economy seats. (The total fare was about $400 each.) Interestingly, if we’d simply flown from Rome to London, the fare would have been about $700 per person! Perhaps the fares are cheaper when departing from a poorer country. 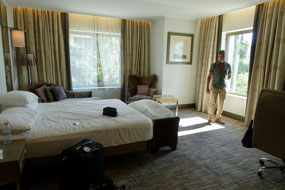 Room enough for my Pilates workout!
)
The airport lounge was interesting to say the least — just a collection of chairs in a small room with a TV. A waiter from the nearby kiosk came in to take our orders. He asked us what we wanted, but we had no idea what was on offer. His answer to our query was basically that we could have sandwiches and drinks. Having had breakfast not long before, we just nibbled at the toasted sandwiches that were delivered, feeling guilty about wasting food that had used a lot of resources in its production. (It also made me think of the enormous waste of food there must be on all flights!)
We were seated in row 1 on both flights. We couldn’t see much out of the one window on the first flight, but had better views on the flight up the coast from Rome. On both flights, we were served a hot lunch — again, I only picked at the food, not being particularly hungry and the second lunch not being particularly tasty!
We touched down about 10 minutes later than scheduled in Rome. Given that our connecting flight was scheduled to leave about an hour after we touched down, we were a little anxious that we might not make it in time, especially as the plane seemed to taxi for about 10 minutes before coming to a stop. 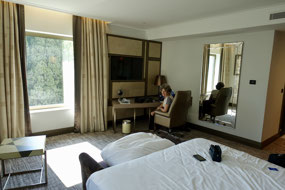 Our spacious room at the Hilton
We were then bussed to the gate where an officious young woman was holding up a sign for all those transiting on to London. People were still piling off the bus when she impatiently started to head off with a small group of people in tail, not bothering to check whether there were any remaining passengers to London still coming. Michael was caught behind a group of people who were obviously not in much of a hurry, but he could see that I had started to follow the young woman. I was anxious not to lose her, but also concerned that I might lose Michael. However, he managed to catch up as we were led through the airport to the next departure gate and on to another bus out to the next plane. It appeared that our group got smaller as we went along, but I assume that everyone who was supposed to be on the next flight somehow made it.
The flight to London took about two hours. Every now and again I looked out of the window to check out the landscapes below. The most interesting were the snow-capped mountains with lakes and glaciers. 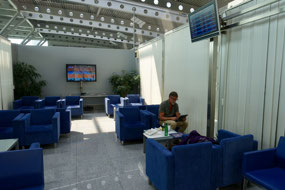 The airport lounge in Podgorica!
We touched down in London soon after 4pm, having gained an hour along the way. Our luggage, which was labelled ‘priority baggage’, given that we had flown business class, did not appear in the first batch of luggage. As the second lot tumbled down the conveyor belt, Michael started convincing himself that our luggage hadn’t made the connection. However, eventually my bag made an appearance, soon followed by his. We took the Hertz shuttle bus to the car rental office, picked up a small manual car, loaded up, set the TomTom (satellite navigation) to take us to our friends’ place in Oxfordshire, familiarised ourselves with the switches and levers in the car, and then set off on our way.
All was going reasonably well, apart from the fact that the weather was miserable — intermittent rain and quite cool — such a contrast to the the heat and blue skies of Montenegro. However, not long into our journey, the peak hour traffic crawled to a standstill. For quite some distance, we moved along at a snail’s pace, losing about half an hour altogether.
We arrived at Lynette & James’ house in Oxfordshire just after 7:30pm, having optimistically expected we might have made it by 6:30pm! We were warmly greeted and offered drinks and a delicious curry dinner. Having so much to catch up on, it was quite late when we finally called it a night some time after 11pm.
Other Entries
- 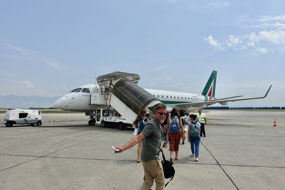 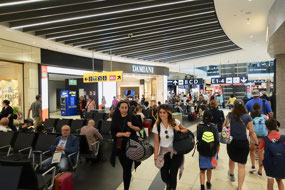 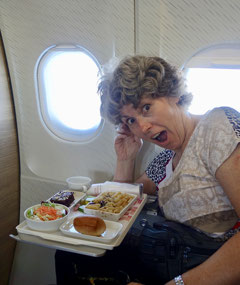 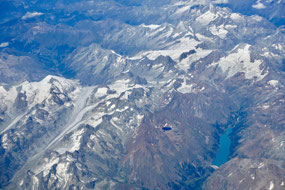 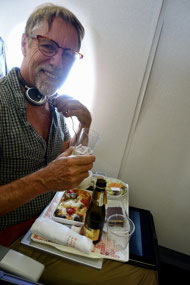 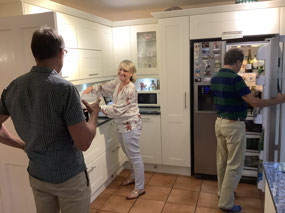 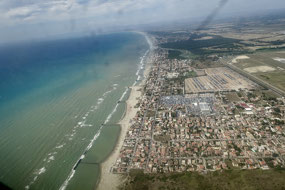 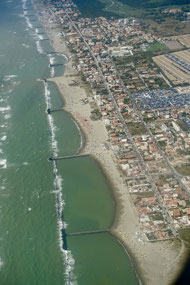 I'm about to leave for Rome in just over 24 hours and it looks like it will be 34 there! I hope the UK weather holds out a little bit longer this summer leading into autumn. I like that there are some snow capped mountains round, as I'll be in Zermatt after Rome. Loving looking at your trip so far. xxoo

What a contrast in the weather between Montenegro and England! From your description of the officious young lady escorting you on to the gate in the airport in Rome to embark on the flight to London, I cannot but compare that with the utmost of care given by airport staff in both Adelaide and Cairns in their escorting us to the planes that took us on our holiday a few months ago with me in a wheelchair. How delightful to meet up with Lynette and James again. It will be interesting to learn what they feel about the Brexit developments. The change in the daily temperature will be quite a contrast. Keep warm.