North to the Lake District 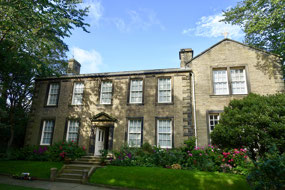 The Bronte Parsonage Museum
As planned, after breakfast I headed off to the Bronte Parsonage Museum to learn more about the famous Bronte sisters. The parsonage has been altered a little since the family lived here, but some of the rooms remain as they were during the 40 years it was owned by Patrick Bronte, their father. Tragically, he outlived his wife and 6 children, dying at the age of 84. The first two daughters died of consumption at the ages of 10 & 11. The mother died at the age of 38 from uterine cancer when Anne was still a baby; Emily and Anne died at 29 and 30 years of age; their brother Bramwell died at 31; and Charlotte died about 6 years after Emily and Anne. She was pregnant at the time. And so there are no direct descendants of the Brontes. One can only imagine how many more great novels the sisters might have written, had they survived. Life in this area of the world was clearly very difficult.
I had correctly estimated that I would need about an hour in the museum. Michael met me back at the guest house where we bade farewell to our host, Brendan, who kindly gave us some chocolate brownies as a parting gift. 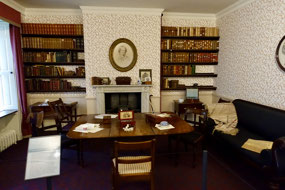 Where the siaters wrote their novels
We’re not sure whether TomTom decided to take us on the scenic route or the fastest one, but it certainly took us on some narrow roads across the moors. We finally connected to a motorway where we were able to pick the speed up to 70mph...until the traffic slowed to a crawl again. Fortunately, it kept moving, finally passing a car that had clearly been involved in an accident.
After about two hours, we arrived in the town of Kendal where we stopped to purchase some wine and a few snacks, knowing that we would be staying in a more isolated part of the Lake District for the next three nights. We back-tracked a few miles to reconnect to the route to our accommodation near Irton. Again, TomTom decided to take us off the main road and send us up a VERY narrow road flanked by high stone walls, only wide enough for one car. There were no pullout areas for about a mile, and so we were quite tense, wondering what on earth we would do if we were to come head to head with an oncoming car! Fortunately, we were spared the distress of having to deal with such an ordeal. 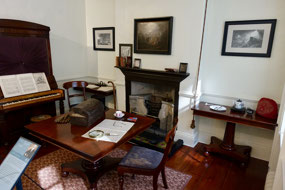 In the Bronte’s old house
One driver would have had to reverse for a considerable distance in order to reach a wide enough section to pass the other car. I don’t feel that confident with my reversing skills, and so was greatly relieved to reach the end of the stone walls. After that, we traversed for miles along a narrow road, but at least there were more opportunities for passing oncoming traffic. Finally, we crossed the pass and descended down the mountains and back on to a main road. We were left wondering whether this had indeed been the quickest way. Perhaps the locals could have navigated these dangerously narrow roads more quickly than we could.
Not knowing the exact location of the B&B we had booked, we consulted the small map on the booking form. There was just enough of the map showing for Michael to find a match for the area on the Google map I had downloaded on to my iPad. Without this reference, I’m not sure how we would have found it, as it is certainly in a remote position far from anywhere!
We eventually roused the landlady, Lesley, who was very welcoming and thorough in her instructions and explanations. 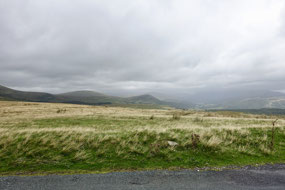 View on the way to the west of the Lake District
As well as just about everything you could possibly need, she had laid out for us two slices of gin & tonic cake and a liqueur each.
One of the first things I did was to login to the internet to check my messages — Lynette & James were due in at 4:15pm, only 20 minutes later. We had barely settled in when they arrived. After they had been inducted by Lesley, we jumped in their car and drove a few miles down the road to Wast Waters, the deepest lake in England. The spectacular views were enhanced by the occasional appearance of the sun which gave the landscape more depth and colour.
As recommended by Lesley, we dined at the nearby Bower House Hotel before heading off to bed, having already dutifully submitted our breakfast and lunch orders prior to going out for our evening meal. The weather forecast looked promising for our planned hikes over the next days.
Other Entries
- 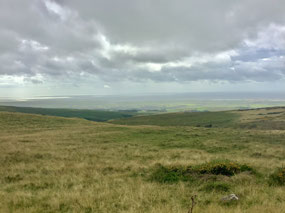 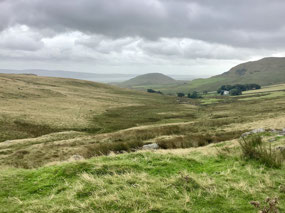 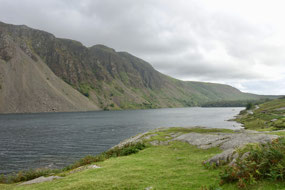 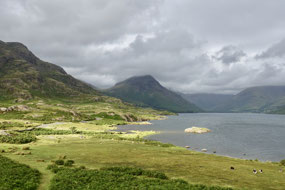 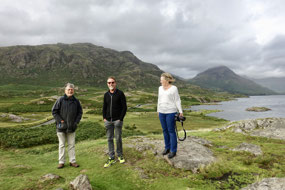 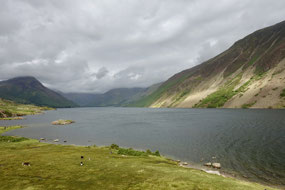 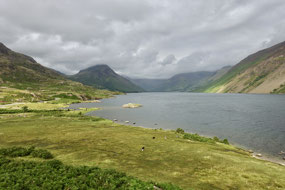 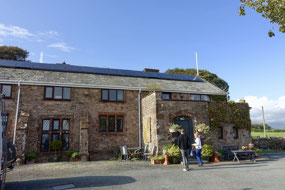 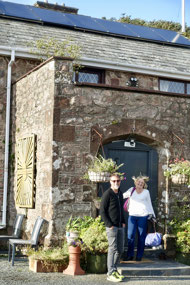 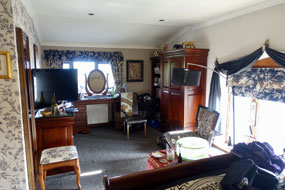 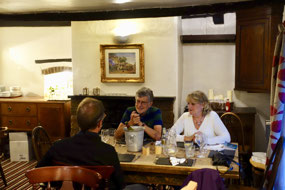 Such a sad story of the Bronte Family, I didn't know that Charlotte was pregnant at the time she died. Glad that you finally found the B&B - my friend has also had problems with the Tom Tom too - and they were traveling in a motor home to make it worse. It even sent them to an location that saw them needing to reverse over 300 meters between stone walls. Enjoy the walks

The events of this last day at Haworth were quite varied and memorable. Your visit to the Bronte Parsonage in the morning was, no doubt, an important reason in your choosing this part of England in your itinerary. Oh, but how sad to learn of the lives of this family being cut so short with the father dying at 84, and his wife dying from cancer at the age of 38, and the first two of his five daughters dying in childhood, the other three dying between the ages of 29 and 38 and their brother dying at 31 from tuberculosis. Your journey by car to Irton was understandably quite tense, when driving along sections of very narrow road only wide enough for one car and flanked by high stone walls. So tense, I venture to say, that you were unable to take a snap of the tortuous narrow stretches. Your timing in reaching your B&B in Irton twenty minutes before Lynnette and James’ arrival was well timed, allowing you to relax whilst being driven by them in their car, enjoying the beautiful scenery of Wast Water.