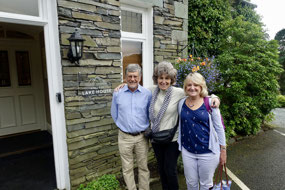 Saying goodbye to James & Lynette
It was time to bid farewell to our English companions and head off to explore the Peak District National Park. The journey took us about 4 hours, much longer anticipated due to the heavy traffic on the roads. Remind us to avoid being in England when they have a bank holiday on the Monday (what we would call ‘a long weekend’)! Although it was Friday, many holiday-makers had already set off on the journeys, the Lake District and the Peak District being popular destinations.
Noticing a large Tesco store about half an hour before our final destination, we stopped, primarily to use the toilet! We stocked up on some additional supplies for dinner before continuing on our way.
The area of the Peak District we were driving through consisted of rolling hills, old villages, and small clusters of woodlands. It was not as dramatic as I had imagined, but was certainly very pleasing to the eye, especially given that the sun had reappeared at last.
It took us a while to locate Deeley House, our B&B, as it is not particularly well-signed. 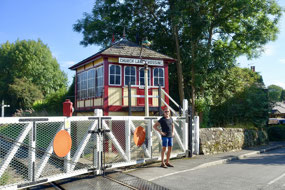 On our walk to Matlock
It was impossible to drive too slowly, as the road was busy and too narrow for overtaking. Michael was again using the small printed map on the booking confirmation printout along with the downloaded Google map on his iPad to pinpoint the location. His only real clue was the bend in the river shown on the printed map. A roundabout near the town of Matlock enabled us to drive back along the main road. Eventually, I pulled into a driveway to let the traffic pass. It was then that Michael noticed Deeley House on the opposite side of the road. Michael hopped out of the car to help direct me — we had to wait a while for a break in the traffic to be able to reverse out of the driveway and manoeuvre across to the other side of the road and into the correct driveway.
Our host, Michael, was very warm and friendly. (We were very pleased to have a king-size bed in our room!) After settling in, we set off on a walk at about 4pm to explore the area, meandering away from the busy main road down towards the river, passing little pubs along the way, as well as a couple of camping sites that were full of tents and holiday makers sitting around preparing for their evening meals. 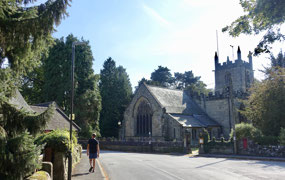 On our walk to Matlock
As the road started to climb up a steep hill, I enquired of a woman coming down with her children and dog as to whether it led to anything interesting. I was rather pleased when she advised us that it would be a more pleasant walk to take the footpath through some farmland on the flat area near the river, and then along next to the railway line into the town of Matlock.
In Matlock, we found a Marks & Spencers Foodhall where Michael bought himself a chocolate bar. Further into the town, we noted a fish and chip shop — a meal for the next evening perhaps. We had already walked for a couple of hours, and so I was keen to start the homeward journey — about 3 miles, according to my calculations. As soon as we could, we got back on to the footpath that ran alongside the railway line, well away from the noise of the busy main road, eventually reconnecting with the quiet roads we had walked down a few hours earlier. By the time we reached our B&B, we had been walking for almost 3.5 hours.
Michael, our host, couldn’t have been more hospitable, providing us with plates, cutlery and glasses for our evening meal in the dining room. Our bread and tomatoes, etc. were topped off with some imitation New York cheesecake — not as delicious as the real thing, but reasonably tasty. Not long after finishing our meal, we fell into bed and drifted off to sleep in less than no time!
Other Entries
- 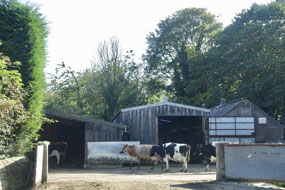 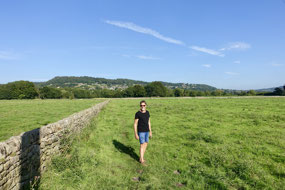 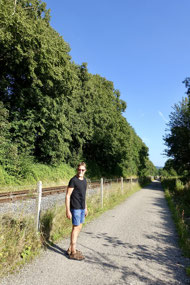 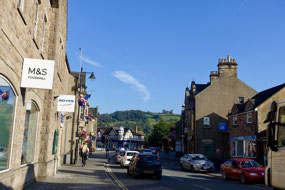 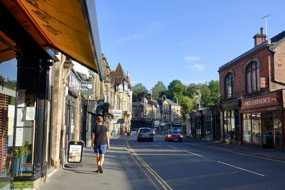 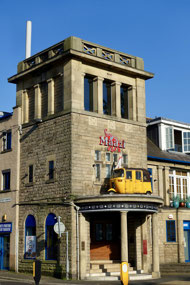 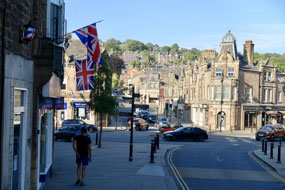 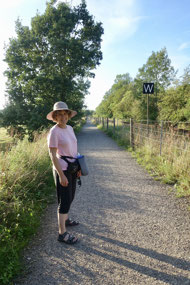 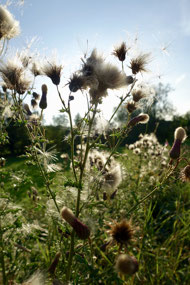 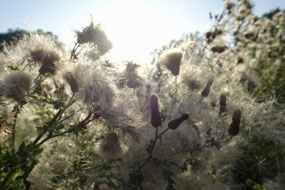 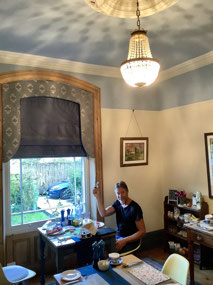 Lovely spot by the looks to be based

Well, the tour is nearing its end. Your day was interesting as you passed through old villages, and small clusters of woodlands on your drive from Ambleside to Darley Dale, where you booked in at your B&B, then followed by a subsequent 3.5 hour walk to Matlock and return. I very much enjoyed viewing the selection of photos taken this day, capturing the beauty of the countryside in the Peak District and the architectural styles of houses, shops and offices in Matlock.

The weather certainly improved dramatically after we left the Lake District, Debbie — but it also improved there too! Just our bad luck!

Indeed, not a bad spot to be based, Tracy. The B&B was excellent — I would highly recommend it to anyone who goes there.