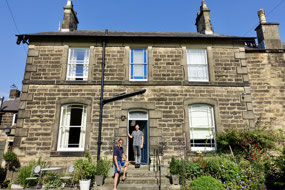 Saying goodbye to our B&B host in Darley Dale
As we would be returning our hire car as soon as we arrived back in London, we had to pack everything in to our bags, rather than leave some items in the boot or the back of the car as we had been doing for the past week or so. With everything jammed in to our bags and loaded in to the car, we said farewell to our lovely host, Michael, and set off for London.
Fortunately, most of the heavy traffic was moving in the opposite direction. Even the motorway flowed smoothly for most of our journey, only slowing down a couple of times. Whilst there were no obvious reasons for the slow progress, we imagine that traffic merging from other directions was probably the culprit. There are just too many cars in England!
The slower pace only added another 15 minutes to TomTom’s predicted arrival time, but we then added extra time in finding a petrol station to fill up the car before returning it to the depot near Heathrow. All luggage accounted for, we hopped on board the waiting shuttle bus to the airport. 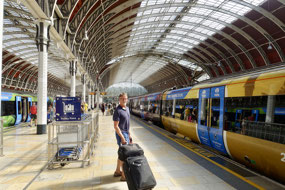 Arriving at Paddington Station
The express train, that Michael had pre-booked from home, left within a couple of minutes or us boarding and arrived at Paddington Station in about 15 minutes. All had gone very smoothly up to this point. Then there were the stairs! Poor Michael had pinched a nerve in his neck, and so carrying our heavy bags up and down stairs to the platforms was a more difficult challenge than usual. Fortunately, some strong young men offered to help on a couple of occasions! The problem was that we ended up having to take more flights of stairs than we should have — firstly, we went to the wrong platform (the train was going in the opposite direction!), and then we carelessly caught the wrong line! It was only when the next stop shown on the illuminated sign in the car was different to the one it should have been that I realised we were on the wrong train. We hopped off, hauled the bags on to the opposite platform and then hopped on the next train that came through. Whilst the sign on the platform had indicated that this one would take us to our destination (Temple), a woman on the train informed us that the sign had been incorrect — we needed to get off, as she too needed to, at the next stop and catch another one! At last, we were on a train that would take us to Temple. 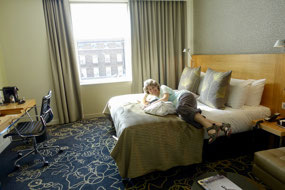 Our room at Temple Court Hotel
Talk about confusing and time wasting! With all those stairs thrown in, I wonder if it wouldn’t have been better to simply take the Underground from the airport — we would have alighted at a station which, from memory, has escalators, and then could have walked to our hotel. (It is quite a long walk — we did it last year — but it might have ended up being quicker and easier than all those stairs and train changes! Unfortunately, Michael has also pre-booked our return journey on the express train. We will have to take more care to ensure that we don’t end up on the wrong train!
A 10-minute walk from the station brought us back to the Temple Court Hotel where we stayed last year. We have a lovely large room with a very comfortable king-size bed. It was about 4:40pm when we set off for a stroll around the streets of London. Being Sunday, the office areas were very quiet, but the West End and Covent Garden were buzzing. We were on the lookout for something like yiros for dinner, or even a pre-theatre meal deal would have sufficed. 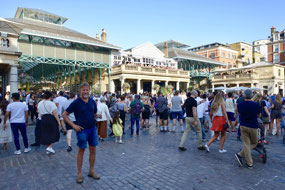 Strolling through Convent Garden
However, we didn’t come across any during our meanderings. In the end, Sainsbury’s (a supermarket chain) provided us with a bottle of wine, some hot chili chicken fillets, chicken curries and  salted caramel cheesecakes which we devoured back in our room whilst watching the end of The Lion King and then a weak Colombo movie with Billy Connelly.
It was around 9pm when we turned off the light and quickly drifted off to sleep. It seemed like the middle of the night when we were rudely awakened from our sleep to the screeching sound of an alarm. We were confused and disoriented. My first illogical thought was that someone had left the clock alarm set, but it was way too loud to be an ordinary alarm! Thankfully, it didn’t ring for too long. I checked the time on my iPad — it was only 10:22pm. I must have been in a deep sleep, because it felt like 2am!
We tried to resettle, but within a few minutes, it began ringing again. By now, we were becoming concerned. We tried to ring reception, but it was engaged. Then I poked my head out the door and noticed a young couple coming through the hall doors — they were also confused and were wondering whether we were supposed to evacuate the building. Then a man in the adjacent room poked his head out of the door and informed us that he had phoned reception between the two alarms. He had been told that they weren’t sure what was going on, but would notify everyone if we needed to do anything. Feeling somewhat reassured, we went back to bed, but not before I had laid out my coat, sandals and bum bag, ready to grab in case we really needed to evacuate the building! Although feeling somewhat unnerved, we drifted back to sleep relatively quickly.
P.S. In the morning, Michael found out that the alarm was set off by a fault in a room somewhere. They were unable to stop the fire brigade from attending. At least we didn’t have to evacuate!
Other Entries
- 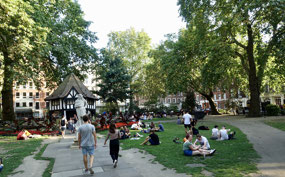 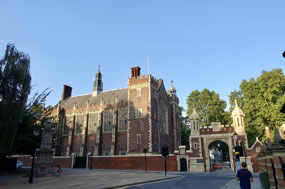 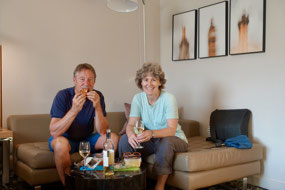 We loved the Heathrow Express and by prebooking in advance manage to get a really cheap deal. Each time we have stayed at an airbnb very close to Paddington Station which we have loved. Paddington also has great links to other underground stations and we love the walk through Hyde Park into Regent Street

Hope Michael is on the improve

The trip back via the pre-paid Heathrow Express went reasonably smoothly. I was studying the Tube map when Michael insisted the train that had just pulled into the station was the correct one — WRONG! Luckily I realised before we’d gone too far, and the correct train left from the same platform (no stairs to negotiate).

Thank you, Tracy — Michael’s neck is much improved.

I hope you enjoyed the ferry trip to Dover, Lisa. You have to see those white cliffs at least once in a lifetime. Next time, you could try EuroStar — the fast train under the tunnel is quite an experience. :-)

My oh my! What a day - Michael’s pinched nerve in the neck through lugging your heavy cases up and down stairs at the stations, coupled with the confusion in catching two wrong trains. Thank goodness for the young men, who helped out carrying your cases and the woman passenger on the train advising you to change trains that arose because of an incorrect station sign. When you finally settled into the Apex Temple Court Hotel and taken a late in the afternoon stroll through the streets of London in this area, picking up supplies for dinner in your luxurious room back at the hotel, one would surely be expected to have a good night’s rest. But no. Having turned the light out about 9:00pm, you had to have the hotel’s alarm system rudely awaken you a little over an hour later, followed by the alarm system of the fire brigade joining into the cacophony of sounds. Amazingly enough, despite the unnerving experience, you state that you drifted back to sleep relatively quickly. What a great team you and Michael make. It would be very, very traumatic if one were traveling overseas by oneself.

Thank you for your wonderful summary of my day’s report, Dad. It is true that the presence of a loved one has a calming effect. You also get to bounce your ideas around and work out together what course of action is needed, if any. When one of us is overwhelmed, the other one usually manages to think straight!