From London to Stockholm 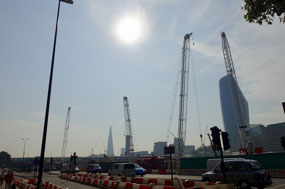 View of the Thames
After enjoying our last delicious breakfast at the lovely Temple Court Hotel (where they serve unlimited cappuccinos for breakfast, even decaf soy versions), we squeezed our gear into our bags, and set off by foot for the nearby Tube station. As I was consulting the Underground map to make sure we were heading in the right direction, a train pulled in and Michael called to me, insisting this was the correct one. I wish he would check more carefully before jumping on any old train! It didn’t take long before I realised we had boarded a district line instead of a circle line. Fortunately, we were still on a section of track that overlapped with the circle line, and so we simply had to hop out and wait a few minutes for the correct train to come along.
There were escalators at Paddington Station, and so Michael didn’t have to lug both our bags up or down any more flights of stairs. In usual form, Michael did his usual thing and rushed to the platform and through the entry gates without carefully checking which platform our train was to leave from.

Arriving at Heathrow
You would think he would have learned this lesson by now! Of course, we were in the wrong area, despite the fact that the barcodes on our prepaid tickets had let us through the electronic gates. (I was just trying to keep up with him, foolishly thinking that he must have known where he was going!) The kind guard let us back out, and the barcodes still worked for entry to the correct platform.
The twenty minute journey to Heathrow seemed to go very quickly, especially as we had wifi access and were engrossed in our iPads for the whole journey. Once through all the checkpoints in the airport, we found our way to the lounge where we occupied ourselves for about an hour. Twenty five minutes before our flight was to depart, I suggested that we should get going, but Michael delayed, saying that the last time he’d looked at the information board our plane hadn’t even started boarding, and so there was no reason to hurry. Feeling concerned, as Michael has been wrong before, I started to pack up and head off. Embarrassingly, when we arrived at the gate, there were only flight staff left. 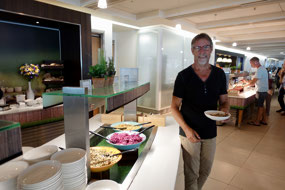 A snack in the lounge
The attendant said they were waiting for us! There were a couple of people who arrived after us, and so we weren’t completely last this time. Luckily, everyone was still queued up in the airway bridge — we weren’t dreadfully late!
We watched our downloaded Netflix movies on our iPads for the two-hour flight to Stockholm, arriving at about 4:30pm local time. Once we had cleared immigration and collected our bags, I had a quick toilet stop. As I was buckling up my backpack when Michael headed out the exit. Caught behind some slow people pushing trolleys, I ended up a considerable distance behind, and when I emerged through the doors Michael was nowhere to be seen! I waited for a minute or so, then looked outside the main doors to see if he might have headed towards a bus stop. Not a sign of him! Back inside, I noticed a sign pointing towards ‘information’. I figured that that would be his destination, and sure enough he was there, wondering where I was. He told me that as he had exited through the doors, he had said he was going to information. 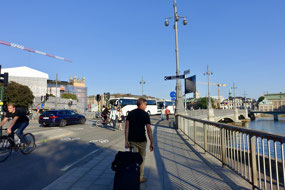 First view of Stockholm
Clearly, he said this to a complete stranger, as I was nowhere near him at that point!
We purchased our tickets for the express train into the city and only had to wait a few minutes before the next train pulled up. In twenty minutes time, we were in Central Station, Stockholm. A quick consult of Google Maps and we were on our way, on foot, the apparently short ‘2km-walk’ to our hotel. It was quite warm, and the walk was quite strenous — some uphill sections, as well as the long cobbled road through the centre of the old town. Michael ended up having to pull my bag as well as his own. It was just too hard for me. (I am sure I was still suffering a bit from another outbreak of my heat rash, which is probably a form of vasculitis. I hadn’t taken an antihistamine the day before, as it had been less than 24 hours since the last one — its effectiveness certainly doesn’t last for 24 hours.)
Fifty minutes later, we arrived at our hotel. Our room is small (there’s not much space to put our cases), but the bed is large and comfortable. We dumped our gear and then went for a walk to explore the local area. Michael was keen to have yiros for dinner — luckily we found a food van selling fast Greek food. A quick check of prices at the supermarket confirmed that the cost of living here is comparable to Norway — quite expensive.
Back in our hotel room, we pulled the quilt out of its cover and used the latter as a sheet. We drifted off to sleep with the sound of clashing bottles in the background as people deposited their rubbish into the recycling bins just outside our window. With no air conditioning in our room, it was a pity we had to sleep with the window closed.
Other Entries
- 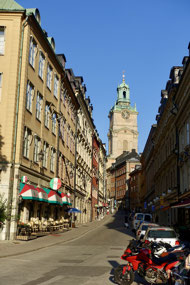 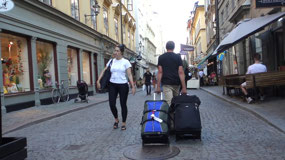 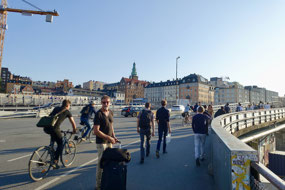 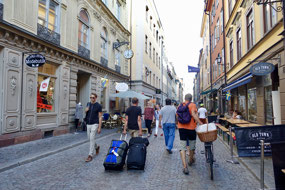 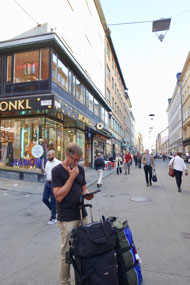 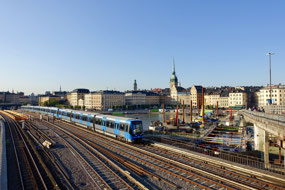 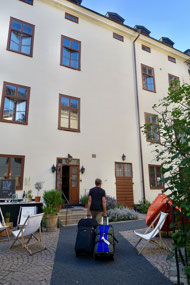 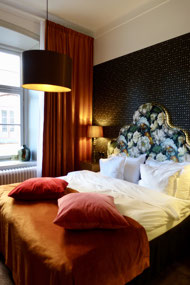 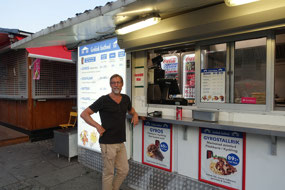 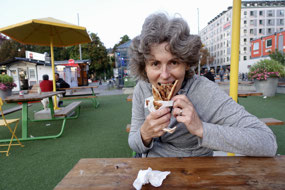 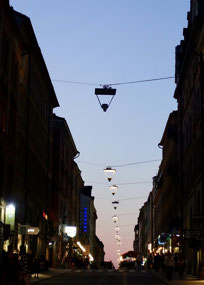 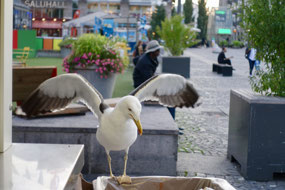 Love Stockholm and your hotel room looks lovely having been there in each season now I think winter although dark when she is wearing her Christmas finery is my favourite The best way to eat reasonable in all of Scandinavia is to eat like a local. Main meal in the middle of the day at a cafeteria style place and an early dinner after 6pm they cater for tourists with restaurant meals. Enjoy this beautiful landscape

Interesting to learn you also take the doona out of its cover.... why do they use them in summer... far too hot! and if there is aircon it is often freezing so you do need the doona, even if it is 30 deg outside, Crazy

Congratulations on successfully completing a most intricate and well planned change from one city to another. It is quite a business changing from B&B to B&B when in the same country, but when it comes to also changing from one country to another, it adds to the complexity. When the change also involves catching additional train trips to and from airport terminals, it can become quite nerve racking, ensuring that all these sections flow into each with minimum delays. Boarding a district line instead of a circle line train must be a common problem to many visitors. In Stockholm, although your planned 2km walk from the airport to your hotel was more strenuous than expected, because the road was cobbled in the old part of the city, you were not deterred from going out for a walk to explore the local area after dumping your gear in your room. The photos of this day arriving at Heathrow and Michael enjoying a snack in the lounge set the scene, followed by several shots as you walked to your hotel in Stockholm, your hotel room and the locating of the road stall where you bought yiros. By the happy look on your face as you ate the yiros, I deduce that there were not too many crumbs left for that ravenous seagull.

We just don’t feel like a big meal in the middle of the day, Tracy — it’s too soon after our big breakfast! If we had planned to stay longer, we would have done what we did two years ago when we went to Norway — stayed in an apartment and prepared our own meals. For two nights, takeaway food was fine. :-)

I agree, Barb — it’s crazy having the air conditioning set so low that you have to sleep under a doona, even if it’s stinking hot outside! We try to turn the air conditioning temperature up and the fan down so that we can sleep with just a sheet (or doona cover). I wonder how much electricity could be saved by setting the temperature a little warmer — not just in hotels, but everywhere? I find supermarkets freezing cold in summer, especially when one dresses for warm weather. (I just found an article on this very subject: https://www.today.com/health/office-air-conditioning-cold-women-science-reveals-why-t36476. You might need to copy and paste the link into your browser.)

Thank you for the positive feedback, Dad! Michael usually does the homework on how to get from airports to train stations, etc., and so we usually have some idea as to how we will get from A to B to C. It doesn’t always go as planned, but we get there in the end! And you’re right — no morsels were left for the ravenous seagulls! :-)