We begin the long journey home 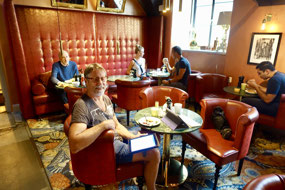 Breakfast in Stockholm
We awoke to grey skies and wet roads, indicating that it had rained a little overnight. With bags packed and left in the hotel’s luggage room, we had a final stroll around Stockholm. After purchasing two lots of Bodum cutlery, we took advantage of our 24-hour transport cards and caught the underground train (only one stop) into the old town, took a quick look around, and then caught another one (2 stops) back.
Our planned journey from the hotel to the airport via the underground train and airport express train went very smoothly. Escalators and lifts enabled us to transit to the different levels without having to lug the bags up or down any stairs. There was hardly any waiting time for trains — in fact, the airport express left 2 minutes and 45 seconds after we boarded.
At the airport check-in, we confirmed that we could check our luggage right through to Adelaide — we wouldn’t have to collect our heavy bags in Doha and lug them to the hotel and back. I removed from my luggage a couple of small bags I had already packed with essential supplies for our one-night stay, hoping that I hadn’t forgotten any vital item. 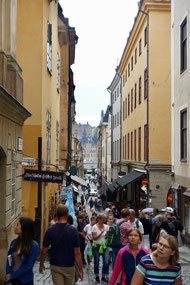 Last walk around the old town
Flying business class enabled us to fast track through security. Our first stop was the American Express lounge where we indulged in a gourmet open sandwich and a glass of wine, mindful of not eating too much, knowing that there would be much more food ahead of us! We then had to pass through immigration — no fast queue here, unless you were an EU national! Finally, a second official opened up a booth and helped move things along a little more quickly. We located the lounge (so ordinary, I didn’t even take a photo!) and waited here until the boarding call. (Michael did try to locate another lounge to visit, but without any luck!)
Michael was reluctant to respond to the first boarding call, but I had too many memories of listening to his reassurances only to then find ourselves running to get to the gate in time! However, this time he was right! His attempt to ask the woman checking passports and boarding passes if we really had to go through into the waiting area just yet was met with ignore — we were processed and there was no turning back. For the next twenty minutes or so, we had seats and internet access, and so it really wasn’t that bad.
Just before boarding, Michael noted that our seating had been changed from that which he had chosen. His observation that the plane had been changed to a smaller one led me to believe that we would be in ordinary seats such as you would expect on a business flight between Adelaide and Sydney. My disappointment was palpable, but didn’t last long, as we soon discovered that the plane was actually better than the one originally scheduled. 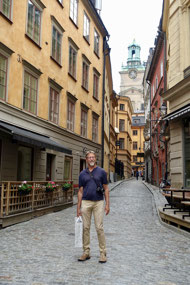 Last walk around the old town
The confusion with our seating (that had led Michael to believe that the plane was a much smaller one) was due to the fact that we had been moved to two seats next to each other in the centre. Given our preference for window seats, the crew quickly sorted things out for us.
Dinner was a little too much for me and also a little bland, but Michael, who coincidentally chose the same items, found his delicious and devoured the lot. After watching the end of the movie that I had been viewing 5 weeks earlier (leaving off where the young heroine was drowning under a frozen lake — by the way, she survives and makes it in time to have her lung transplant — way too predictable!), and then another interesting Irish movie, I drifted off to sleep. I was rudely awoken about 90 minutes later by the announcement that we were about to land in Doha — it was after midnight in Doha.
We eventually found our way out via a business class lounge, thus avoiding the long queues through immigration, and checked out the hotel transfers bus stop, just in case there happened to be a transfer service provided by Westin. The attendant organised a car before we could process what was going on, and suddenly we were in a position of paying about $35 instead of at least half of the price had we gone by taxi. Given that the amount wasn’t too exorbitant, we accepted the ride, only to be overcharged by 5 rials, but we were too tired and confused to argue the point. (We’re just hoping we don’t need those 5 rials for the return trip, as we have a limited amount of local currency.)
We collapsed into bed in our impressive $130/night room some time after 1am, having lost an hour. Michael drifted off to sleep quickly, but I tossed and turned for a while, aware that my throat was beginning to feel sore. I took a couple of Panadol, but still had difficulty falling asleep. At least I have been well for almost all of our trip!
Other Entries
- 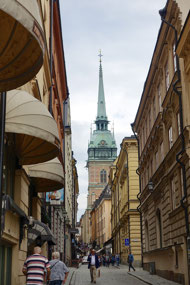 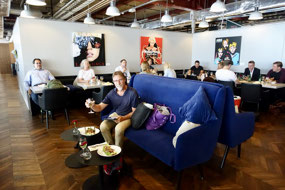 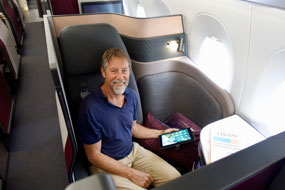 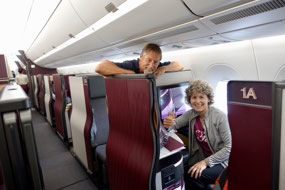 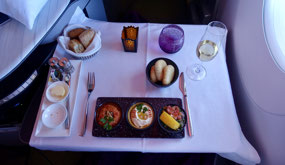 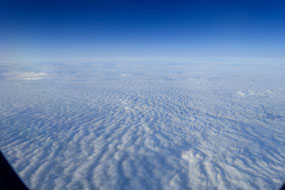 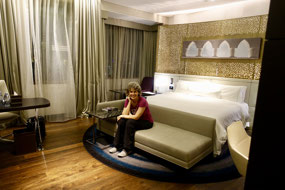 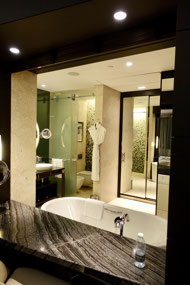 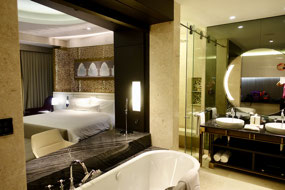 Wow nice seats and pretty fancy hotel, have a safe trip home. Hoping your throat feels better in the morning.xxx

A last look at the old town at Stockholm, a change of trains negotiated without problems, an airport with escalators that saved lugging of cases, a pleasant surprise in getting an upgrade to a better plane and a magnificent room in your hotel in Doha, with a variety of photos covering the day’s events, bring you forward to the last entry in this wonderful tour.