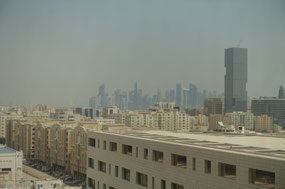 View from our hotel room, Doha
Given that the outside temperature was heading for around 44C with high humidity, Michael opted to do his daily workout in the hotel gym -- a wise decision, I'm sure! I did my best to sleep in, hoping that I might be able to defeat the bugs that were invading my throat.
Our hotel was not located near the city centre, and as we were not particularly inclined to drag ourselves out into the heat to explore whatever the local area had to offer, after a fairly average breakfast in the club room, we spent most of the day in our room. Michael took himself off for a swim in the pool and I dozed on and off.
Although we had been offered a 6pm checkout, we decided to head off to the airport a couple of hours earlier. Having been tipped off by one of the hotel receptionists that Uber taxis were the cheapest way to get to the airport, we ordered one on my iPad. The app has certainly evolved since we last used it to order a taxi in Brussels a couple of years ago. We were able to track the designated driver's movements, and the fixed amount was automatically billed to our credit card. 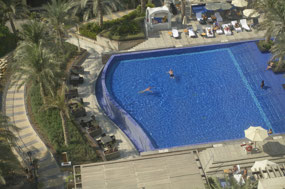 Michael swimming in the hotel pool, Doha
For significantly less money than we'd paid the night before, we were transported back to the airport which we entered via the very grand area reserved for business and first class passengers. Not having any large luggage to check in made the process much easier. I did, however, look like a bag lady with my backpack and two reusable shopping bags containing my half-pillow and the gear I had needed for our overnight stopover. We probably didn't really look like your usual business class passengers!
The business class lounge was even more impressive with ample space to relax and three dining areas. We certainly enjoyed eating and relaxing here. However, our flight was delayed by 3.5 hours, and so by the time we boarded our plane just before midnight, we had well and truly had enough of the place!
Right up until the day before, our allocated seats had been two window seats near the front of the plane. However, again someone had decided that we should be seated together in the centre of the plane! When we checked in, we were able to have our seats moved to the window. 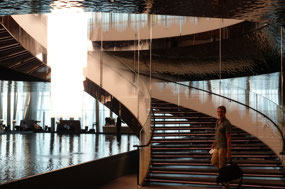 In the Qatar Business Class Lounge
However, instead of turning left upon boarding our flight, we had to turn right -- still in business class, but just in front of economy. The economy passengers streamed past us as they found their way to their seats, gazing with envy at our spacious and comfortable Q-suites.
The 14-hour flight home consisted of eating and sleeping and watching a couple of movies. (As I write up this entry, 9 days after arriving home, I have no recollection of what I watched!) With the aid of a sleeping tablet, I managed to get some sleep despite my sore throat.
Our arrival in Adelaide was not as exciting as we had anticipated. Alisha had planned to bring Oaki and Marlo to the airport to meet us, but when our arrival time was shifted from 4:20pm to almost 8pm, these plans were of course changed. As required, we declared our walking shoes and waited for customs to clean them, and then ordered an Uber taxi to take us home. We had some difficulty locating the Uber driver, but finally worked out where he was waiting (they are not permitted to use the usual pickup/drop off road at the airport). 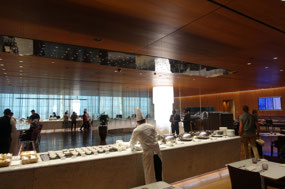 In one of the lounge restaurants
Finally back home after nearly 5.5 weeks on the move, it was time to readjust our body clocks and settle back down to life in Adelaide.
Just over a week later, I am still getting over my cold (which really took a hold after I returned to swimming on Tuesday), but I think I am now just about over my jet lag. We are still collapsing into bed some time between 9 and 10pm, and waking up before 6am, but this pattern tends to suit us both.
As I look back over our exciting and varied adventures, the real standouts for me are the nature walks -- the Durmitor National Park with Gitti & Hermann, climbing Scafell Pike with Lynette & James, and walking across the wuthering moors between Haworth and Hamden Bridge. (I have finished reading Agnes Grey (by Anne Bronte) and have started reading her novel The Tenant of Wildfell Hall, as well as reading more about the lives of the Bronte sisters.)
To those who have followed our adventures, whether just to glance occasionally at my photos or to read my daily entries, thank you for your interest. I am sorry, dear reader, if you have found my entries too wordy and detailed, but they are primarily for my own records and so that my dear dad can feel as if he is travelling with us. Thank you, Dad, for all your thoughtful reflections. And thank you to all of you who have left comments on this blog or through private messages. See you on our next adventure!
Other Entries
- 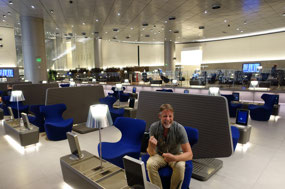 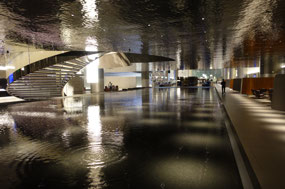 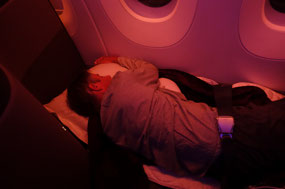 Thanks once again Merrily for a wonderful blog . Have really enjoyed travelling with you. Hope you are better soon and we can catch up in person.

You can never write too much I reckon, my gripe is all the bastards that write too little...after all, you can always skip through the blurb, but you can do nothing about the lack of information. The internet has made a lot of us lazy.

Thank you for your most interesting daily blog reports and the accompanying photos of your well planned 2019 tour. You certainly achieved your goal of making it possible for those who followed the daily entries to feel as I did, that we were travelling with you both. Kisses and hugs XXXXOOOO

Really enjoyed reading your blog, once again it has been really interesting and informative - felt like I was travelling with you! Loved your photos too, you certainly went to some beautiful places. Looking forward to following your travels in 2020! Hope we can catch up before then though! xx

Have enjoyed travelling vicariously with you - again ! Your blogs are good, love reading about the places you stay and the walks. Hope to catch up this summer, even if only for coffee.xx

I have just read the whole of your trip to Alfie out loud as we drive back to Tilba. We are nearly home and have enjoyed your adventures, have laughed at Michaels attempts to get on the right train and wonder if you have SIM cards in your iPads to help you not get lost? Nick F a poor unemployed ex student, uses a UK SIM on his adventures around Europe and I understand it is not expensive - will ask him for details if you are interested. Will look forward to viewing your photos when we get home as not enough reception to load in country NSW. Thanks for including us in your trips xxxx