Met my colleague Rob Dunbar, professor from Stanford University. He is the lead for the Stanford group which will make up half of the passengers. Met by Zegrahm staffers in Buenos Aires. Rob and Zegrahm folks very helpful, and managed to move us through the airport with little to no effort. GREAT to know someone on the "inside".

Arrived in Ushuaia about 6:30p… flew in over amazing snow capped mountains and the beautiful Beagle Channel below, named after Charles Darwin's ship. 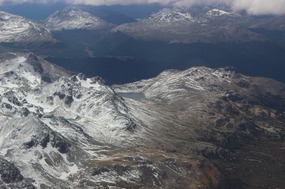 Hundreds of tiny islets scattered throughout the channel with thousands of birds flocking around. Lowering into Ushuaia we saw a distinct tree line half way up the slopes (not very high above sea level in comparison to where we see the tree line back in the states). We had 'lovely' accommodations in the Hotel Mustapic. It "only" cost $130 for two beds and a bathroom. As opposed to $570/night for the Arakur where most of the other expedition folks stayed. The guys at Mustapic were quite nice and it was pretty quiet, but the one star rating is not inaccurate.

Town is more modern than expected, not a 3 star or better, but safe, lots of stores, nice enough people and we found an OK meal for $30 (kinda marginal pizza, but the place was packed and other people seemed to be enjoying their meals). Beautiful surrounding mountains with snow on the north and the south opens up to Ushuaia Bay with several islands and the famous Beagle Channel. Surprisingly, it is quite colorful, with many murals on the town walls, very artsy, and tons of brilliant flowers everywhere. 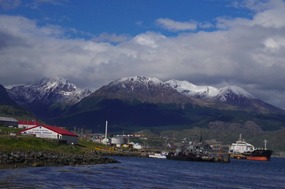 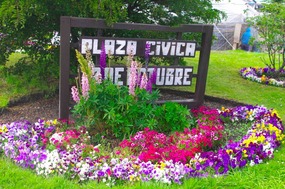 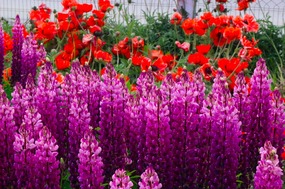 Mural across the street from our hotel

Incredible images and fascinating description. Thank you! I see from weather website that you are in for snow showers tonight and a balmy 50 degrees tomorrow. Must be hearty flowers.

Thanks for update..beautiful flower pics! Reminds me of Alaska in the summertime. Hope you are able to get caught up with jet lag soon to enjoy your amazing trip…Thanks for sharing!

Love the photos! I forgot it is summer there. You must be excitied to get going on this adventure as you are so close.

I was surprised by the flowers then remembered just where you are. Duh. You are missing a marathon rainy weekend here. Lucky guy!

We loved Ushuaia in November 1995. Down there is so much like being in coastal British Columbia or Alaska that you get a strong feeling for how climate molds habitats. We hiked up one mountain to look for a species of seedsnipe (looks amazingly like a ptarmigan) but got turned around by a blizzard.

Sounds great ! Can't wait to share your journey with Mom, the book arrived yesterday....Thank You

Sounds great ! Can't wait to share your journey with Mom, the book arrived yesterday....Thank You

oh... .beautiful ! Continue to have safe adventures down there. Its so stormy back home - serous pineapple express bearing down with a vengeance compared to what you are having in the Argentinian summer. Love the mural!

Thanks for great update, Tom: brings back great memories of similar flight down and Tierra du Fuego a few years ago, just Punta Arenas instead of Ushuais. If I remember your itinerary right, you're going down the west side of the Peninsula, not the east side, but you might see if you can find the latest news on the giant crack in the Larson C Ice Shelf (this program won't let me paste in the url). Try Googling "The crack in this Antarctic ice shelf just grew by 11 miles. A dramatic break could be imminent." Hope you "enjoy" Drake Passage....from the PassageWeather website, it looks like you'll have smooth sailing for awhile, only 3 m seas!

looks amazing. Your adventure is most excellent. Ushuaia looks enchanting. The flower are lupines and poppies. Lupines are quite hardy. You see them all over Iceland and Germany and northern Maine. .I have a tough time growing them here in CT.

Easy access, interesting blog and waiting for more. It just started raining here on top of saturated ground. Love the mural and the color. Hope the food gets better for you. This is so exciting.