After getting home and thawing out for a few weeks, we are now ready to RE-START the Blog. It has been an AMAZING trip and we are excited to share our experiences with you. So, without further ado, here goes......

As you may remember, it was exorbitantly expensive to publish the Blog from the Ocean Diamond, so we decided to wait till we returned home and continue it on a Day-By-Day basis as if we were experiencing it in real time (Jan 4-24). The "dates" are the same, and synced with this month's dates as those on our expedition, except 2 months later.

Also remember that interspersed throughout the Blog will be Entries that compare our voyage with that of Ernest Shackleton, and much more about his incredible 1914-1917 Expedition to the Antarctic.

Note: When you see a message on a photo that says "Read Photo Story!" there is more information to access about that image by clicking on the photo.
Note: Be sure to use the 'Google Map" function (in the upper right at the beginning of each Entry) to see more precisely where we are during our voyage. Use your scroll tool, or the +/- buttons to scale IN or OUT on the map. However, I have found that the Map seems to work well on a computer, but may not work as well (or at all) using a Tablet like an iPad, iPhone or other mobile devices, etc.
Note: For those of you who use Gmail, this Blog notice may arrive under the "Updates" category if you use that Setting.

Today we took a ½ hour bus ride into Tierra del Fuego National Park and did an 8km (5 mi) hike. Weather was partly overcast and quite windy at times, with scattered sun and occasional light rain, moderately windy throughout, but mostly just beautiful! The trail is well maintained, relatively easy, and without any real rugged places. Mostly it closely parallels the rocky/gravelly beachfront interspersed with short stretches into the surrounding forest and ending into the forest and through a pretty meadow. 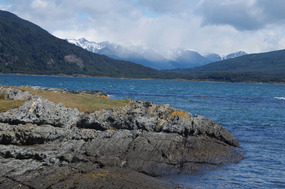 Beagle Channel
Being marine ecologists, we really enjoyed searching among the debris along the shoreline and sharing what we found. Perhaps one of the most interesting critters we saw was a pretty gal skinny-dipping in the freezing BEAGLE CHANNEL! Better her than us, but it was nice of her to share! The forested areas, which are quite thick with trees (little underbrush), are dominated (80-90%) by Southern Beech trees (Nothofagus spp.), which have both deciduous and coniferous varieties. Its branches are wildly crooked, growing every which way, which is somewhat surprising as it would seem they would catch more wind growing in this manner and Tierra del Fuego is ALL ABOUT wind. Wind is clearly the dominant physical factor in this area. Temperatures really don't vary much throughout the year, but the winds sure do and we saw tree blow downs everywhere. The overlapping branches and wind also resulted in many branches rubbing against each other and squeaking loudly, a strangely natural musical experience that entertained us throughout our hike. 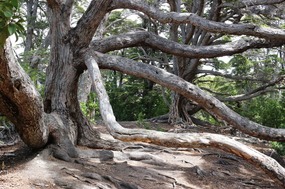 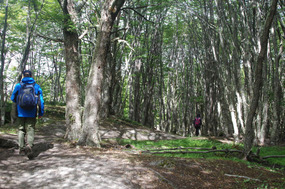 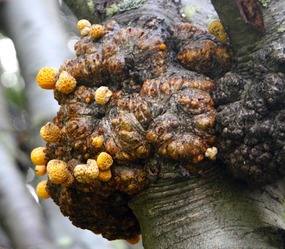 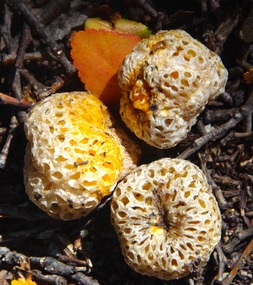 These fungal fruits regularly drop or get blown off the burl and accumulate in piles below the trees. In 1832 Charles Darwin, during his famous cruise on the HMS Beagle (note the name of the channel) was the first person to pen a description of these fruiting bodies and their use by the native peoples. Darwin wrote: “In Tierra del Fuego the fungus in its tough and mature state is collected in large quantities by the women and children, and is eaten un-cooked. It has a mucilaginous, slightly sweet taste, with a faint smell like that of a mushroom”. “Mucilaginous?”… yum, doesn’t that sound tasty. But who are we to judge, so maybe we’ll grab a bushel full and bring then home for a lovely meal of Darwin fruit on the next anniversary of his birthday. 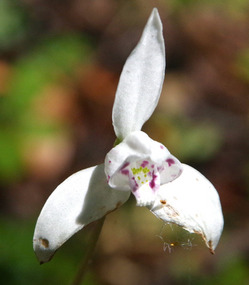 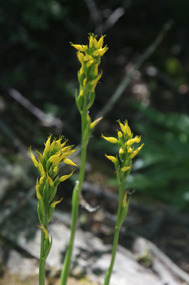 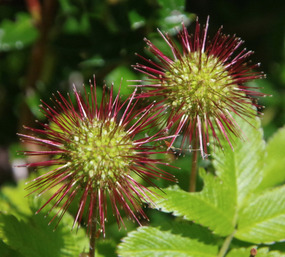 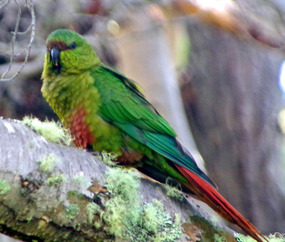 We found many of the birds to be particularly interesting. We encountered a large flock of Chilean swallows, cute baby wrens flitting around pestering their parents for food (remember, this is spring / verging into summer down here), a couple of bulbous and colorful black-faced ibis with their long down curved bill, and large black-neck swans with a striking red covering on their bills.


Also saw several Austral parakeets (Enicognathus ferrugineus), a large bird more like the size of a parrot, with the typical small squished bill of a parakeet and the long colorful tail of a macaw. These birds often traveled in loosely aggregated flocks (odd to see them in a boreal forest!) and we regularly heard them squawking away in the dense forest leaving the impression that the forest was singing or talking to us.

Another interesting, and amazingly tame bird, was the brown Chimango caracara (Milvago chimango). Two of these striking hawk-like birds walked up to within a couple of feet of Roger as we sat on the beach. Apparently, since there are no major terrestrial predators in Tierra del Fuego, most species are remarkably unafraid of large “partly hairy” mammals. 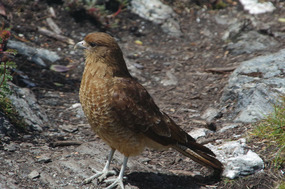 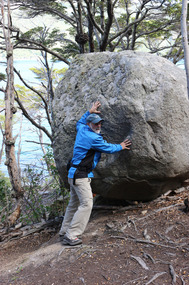 Oh, almost forgot... Tom quickly jumped in front of this HUGE boulder rolling down the hill and SAVED our entire group of hikers from impending doom! What a guy...!

At many locations along the trail we also observed the remnants of many exfoliating Indian middens (garbage heaps) consisting of all kinds of shells and bones of edible marine life (mussels, clams, birds etc.) from centuries past when local Indians harvested the bounty of the locally abundant nearshore coastal marine community.

Tomorrow we board the Ocean Diamond..... and begin our long journey through the Beagle Channel, the Southern Atlantic and SOUTH to the Scotia Sea and the ANTARCTIC! 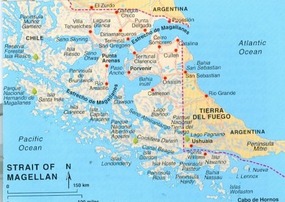 Just have a fun SAFE trip you guys! We are all looking forward to reading all about it, along with real life comments when you return.

We'll look forward to it in surreal time. Have a great trip!

Hello Tom...
Don't they have Starbucks in the towns and hamlets you visit? That's where we do our e-mailing and such when traveling...(I hope you know I'm kidding).
Safe travels...
Mike and Debbie

Definitely worth waiting for! Good cheer and thanks! Buen viaje!

Excruciating! Like those times when you are on a 15-hour flight over the Pacific and WiFi, as bad as it is, costs $5.00 a minute. Look forward to hearing all about it. Maybe even in person from Roger in NC in February.

Oh well! I'll just have to wait a bit longer to hear all the details. Have a great time and be careful of the Polar Plunge!

I understand. They can continue their blog when they are off the ship. Wish them a fabulous and exciting adventure!

Bummer about the aboard ship wifi connection and blog! Anyway, too many interesting things to see to spend too much time writing.

I seem to recall that Darwin spent time in Patagonia when the Beagle visited on the famous voyage...I wonder if the Beagle had exorbitant internet charges aboard ship....oh wait, no internet in Darwin's day!

I have enjoyed reading what few posts Tom could make, and I look forward to reading about the entire trip when he gets back! 'Hope you're not getting too used to having the place to yourself Cindy ha, ha!

Hi Tom & Roger! Looking forward to reliving the trip of a lifetime thru your blog. It was great sharing the adventure with you--we couldn't have hoped for better travel companions. Cheers, Paul and Laura

Great pictures and narrative - thanks! I missed the bit about suspending the blog; I was beginning to wonder if you'd been arrested or something, but I hadn't heard about any international incidents on NPR.

I laughed. I felt wonder! So happy to live vicariously!

Glad you are back among the living! Paul and I were beginning to worry that you'd been detained at the border. Isn't "Musselman" the old-fashioned way of spelling Muslim? Sounds like probable cause to me!

Yes, Laura... Musselman is very close to MUSSULMAN, which is the ancient word for Muslim... Good thing the Immigration Officers at our return port of Entry didn't know I was writing this Blog, or I might be sending you these entries from behind bars in HOUSTON!
P.S. - For those of you who don't know me well, I chose the Tag Musselman because I have spent much of my academic professional career conducting research on mussels... Now you know my deepest darkest secret!

Hey guys ... finally checked my email (been too busy being a newly baked Grandma!) and am so excited to follow along on this anazing journey to antarctica... we never made it south of Ushuaia and we lacked the expertise and knowledge you have in abundance so this is truly exciting for me... i'm already days behind so will get started !!