JAN 7: Board the Ocean Diamond + At Sea

Today was a slow day, but later in the day we boarded the Ocean Diamond. Roger went on a morning birding walk – saw, among several other species a Magellanic woodpecker, a pretty rare bird in these parts. Tom spent time catching up on building the Blog info. Later, Tom & Rog revisited the knoll and saw the woodpecker again... Spectacular bird! 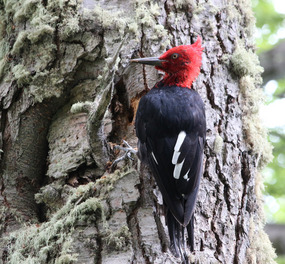 Both b'fast and lunch were provided at the upscale (and very nice, but overpriced) Arakur hotel, where most of the passengers stayed the previous night. It sits up on a high hill behind the town and overlooks the harbor, the 150 mile long Beagle Channel and the Dientes de Navarino ("Teeth of Navarino") mountains on Navarino Island on the opposite Chilean side of the Channel (see below). Our blue ship, the Ocean Diamond, can be seen at the dock in the lower right foreground. 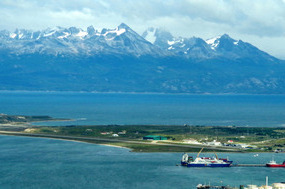 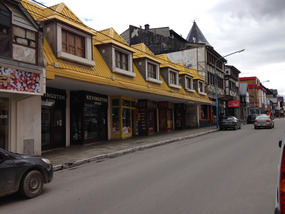 Spent some time in town checking out the artisan market place near the docks which was run by local artisans, not like the more up-scale, sophisticated and expensive art work “uptown”. The town has a diversity of art works on display for the public, from the gardens to statues, to photographic art, as well as murals in open grassy areas down near the port. Interestingly, there was a lot of Dark Art displayed downtown near the Port... 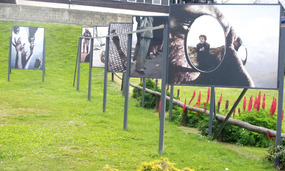 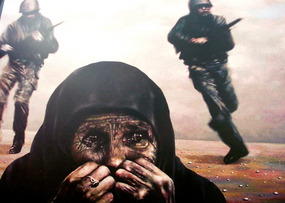 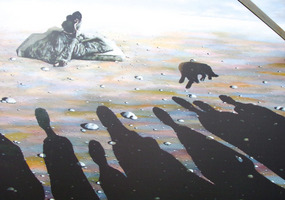 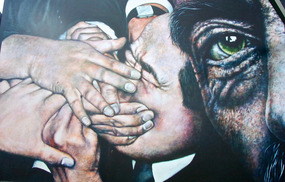 
6:00pm:  Boarded the Ocean Diamond. This particular expedition included the new President of Zegrahm, Van Perry, who is also the President of Expeditions International, which includes Zegrahm, Quark Expeditions and Tui Expeditions… Seems like a nice guy. The 'Diamond’, which is licensed in Nassau, Bahamas, is typically contracted to Quark Expeditions. Zegrahm Expeditions is using it because the ship they typically use (Sea Adventurer) is being refurbished. Early on, all aboard participated in a Muster Drill that involved everyone gathering in the dinning room, donning life preservers, and going to our respective lifeboats. Felt good to drill, but wouldn’t be so nice to hear the emergency signal to do it for real!... UNLESS we had dry suits to accompany our comparatively flimsy life preservers. Accommodations are very nice (we were on Level 4 – mid level and mid-ship… most stable location we could get!), two single beds, en suite bath/shower, sink, and pair of closets, locking drawers, couch, phone, and two large windows. Level 3 only had portholes. Levels 5, 6, & 7 (each more expensive) had a variety of options, including suites, and balconies, but the higher you go, the more motion you will feel! Our cabin vs Shackleton’s….. 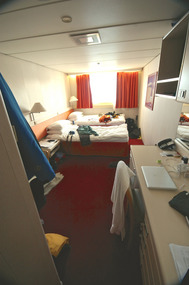 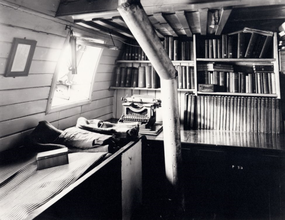 Shackleton's Cabin aboard the Endurance

It felt nice for both of us to finally get to a place where we were not living out of a suitcase. Traveled about 4 hrs along the Beagle Channel before entering the open ocean. So far seas only 2 ft high (Yea!) as we make our way to the Falkland Islands. Tom burned the midnight oil trying diligently to connect to the net and WiFi so we could send out our Blog. Very frustrating! It turns out the cost would be $1/megabyte, making it prohibitively expensive as each post and any responses would cost us about $10-15 if we sent no pictures. Totally unacceptable, so we will continue to try and find a solution. For the time being we decided to continue to write and select pics, but not take a 2nd mortgage on our houses to send it out.

Dinner at 8pm, amazing spread and so many choices! Meal was very high quantity, excellent service, good conversations, and a TON of food. [PROBABLY a little different than dinner aboard the ENDURANCE! See below...] Sure hope we get outside a lot so we don’t starting looking like wanna be elephant seals. 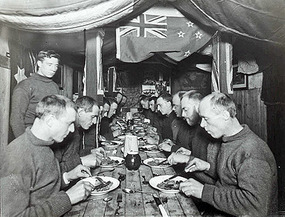 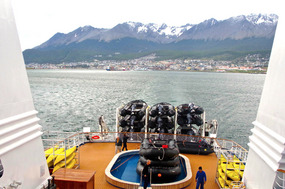 As Tom explained, our blog is a little behind the actual trip. We (mostly through Tom's diligence) have tried to construct it to accurately reflect in space and timing what we experienced. Hopefully, y'all will enjoy the included pics too. Roger

Sorry, didn't realize my just posted comments were going to be attributed to my buddy Bruce Wyman. Hopefully, I have that fixed now. Regards to All, Roger

love the contrasting pics..... you lucked out!

Bon voyage ! Hope the sea swell remains at 2' otherwise you might not see too much of that fancy dining room have a great time!