JAN 8: At Sea -- Steaming to the Falkland Islands

Every day: Pastries and coffee at 6:30a, then b'fast at 7:30a, then more food for lunch at 12:30p, then afternoon tea and cookies at 4:00p, then cocktails with hors d’oeuvres before lectures, then today the Captain’s Dinner at 8:00p. Food is very tasty, and lots of it, and the chef is good at re-purposing food that is untouched. At this rate, before the cruise is over we should have a sufficient blubber layer to survive an extended polar plunge, but perhaps what should be our biggest concern is the airlines forcing us to buy a 2nd seat for our return flight! There are about 170 passengers from three separate tour groups on aboard and 90 ship crew, so mealtime is a bit crowed in the dining hall, but it all works out fine. Guests and expedition staff eat first, then ship crew get what’s left over. Very attentive waiters at every meal, and a jolly ole Director of food services (Alex from the Ukraine) that greets everyone upon entering the Dining Hall with a squirt of hand sanitizer before every meal… trying to spare the ship of massive infectious diseases in case anyone is harboring same… A great move, to be sure! At the dinner the Captain and the managers of the various crews on board introduced themselves.   Three were from the Ukraine, and one each from Peru, Indonesia, India, Philippines, and a couple more countries. Interesting diversity and all of the crew have been very accommodating and friendly. Interestingly, not one African American, nor any apparent Latino guests. Not too surprising as this is a very expensive tour, out of reach of most, even for those with means. Later in the day we had a mandatory briefing on Zodiac safety protocols. The crew is extremely safety conscious, which is great.

With three separate tour groups, one of which is full of diehard birders, there are always at least two and often four bird experts from the Zegrahm staff (or passengers) on deck. The ship is quite large and its pretty easy to find good places along the railing all over the ship to watch for birds and whales with the experts constantly calling out birds (lots of albatrosses, Giant Petrels and other species in the tubenose order), penguins and fur seals, whale blows (common and occasionally see some fins and part of the body), and dolphins (pretty rare so far). 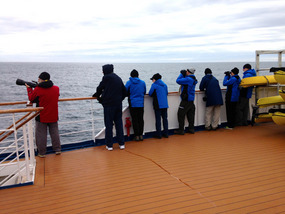 As expected, the species diversity is not particularly high, but the number of individuals is pretty good. Most common are the albatrosses (also known as "gooney birds" or "mollymawks" and are a symbol of the ancient mariner). Three species of albatrosses were especially common on our cruise. They produce a stomach oil made up of wax esters and triglycerides that is stored in the proventriculus. This is used against predators as well as being an energy-rich food source for chicks and also for the adults during their long flights. Albatrosses (like other marine birds) also have a salt gland above the nasal passage which helps to remove salt from the ocean water that they imbibe. The gland excretes a high saline solution through the bird's nose.


The Black-browed albatross (Thalassarche melanophris) weighs "only" about 6-10 lbs (pretty good size for a marine bird) with a wing span of up to 8 ft. It breeds on 12 islands in the Southern Ocean and can live to over 70 yrs. The etymology of its species name (melanophris), is derived from two Greek words: melanos ("black") and ophris ("eyebrow"). The Southern royal albatross (Diomedea epomorpha) was less common on our cruise, but visited us often. The etymology of that genus name Diomedea comes from the Greek hero Diomedes, who later in life turned into a bird. It is typically intermediate in size between the Black-browed and the Wandering albatrosses at about 19 lbs, with a wingspan of up to 11 ft. The Wandering albatross (Diomedea exulans), is one of the largest extant birds, and one of the best known and studied species of bird in the world. It has the largest wingspan of any living bird at up to 11.5 ft, and its weight ranges from 13-28 lbs! It ranges throughout the Southern Ocean with a total of about 26,000 breeding pairs. They are really magnificent flying machines who’s aerodynamic flights, wing structure, and body mass to wing loading ratios have been studied by aeronautical engineers for many decades. These birds live on updrafts from the ocean surface and winds aloft. They can stay aloft for days at a time ('cat napping’ while flying by shutting down parts of their brain). In fact, after fledging from their birth colonies albatrosses do not return to land (almost always heading back to the colony where they were born) for four to seven years. 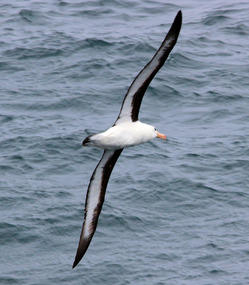 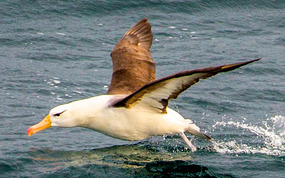 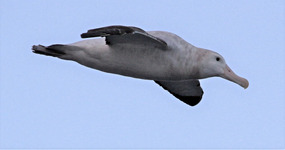 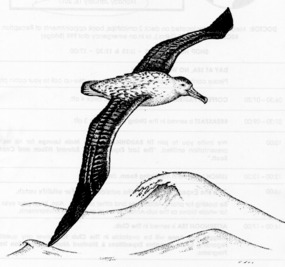 
Around our ship there were always ten to twenty albatrosses swooping down to skim across the waves, dropping into a wave trough, and then soaring five to twenty meters (15-60’) into the air off the lift provided by the wind energy blowing up the wave front or across the wave crest. Its really kind of odd to see a bird that weighs up to 28 lbs flying around behind or along side the ship for hours and it never flaps its wings. The beauty of their flight is truly poetry in motion and as they passed closely by the many photographers on board you could hear hundreds of frames being clicked off per second. Ah, the curse of digital cameras, having tens to hundreds of very similar high quality pictures that you now have to sort through to select just the right one to share or you risk boring your audience into a coma.

The expedition team of naturalists, geologists, and historians kept us busy from morning till night… sometimes up at 5am, sometimes active till 11pm… and beyond if you like…

The expert team also provided lectures on Geology (Tom Sharpe), History (T.H. Baughman), Marine Biology and Botany & Nature Artist (Conrad Field), Ornithology (Jim Wilson), Climate Change and Antarctic Science (Rob Dunbar from Stanford University). Rather than discuss the contents, we will simply provide the titles for each day’s lectures at the beginning of each Entry… We are also providing occasional black & white drawings created by naturalist Conrad Field, an amazing artist as well!

Lectures were provided in the "Lounge" (with an excellent projection system and screen in front) which seated pretty much all of the passengers and staff, with only a few needing to stand. This was very comfortable seating arrangement, with a sloped floor and even additional TV monitors half-way back on each side so those toward the back could easily see everything that was being displayed. 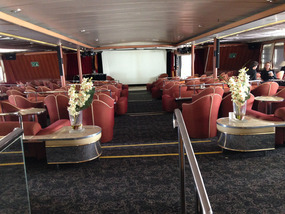 Sorry… no Lecture Lounge on the Endurance to compare...

This is wonderful! Thank you so much for this blog. Those of us who are only able to travel vicariously are really enjoying it!

This is the most exciting "doc" i've read in ages ... great writing, wonderfully informative, beautiful photography and some nice humor thrown in ... it's a page turner ... i'm absolutely envious but this blog is definitely the best runner up to the real thing ... thanks!!