STANLEY:
Today we spent part of the day moving from the amazing penguin and albatross colonies in the West Falkland Islands to Stanley (Capital of the Falkands) on East Falkland Island. While en route, we witnessed an intense double rainbow that was just too good to pass up! 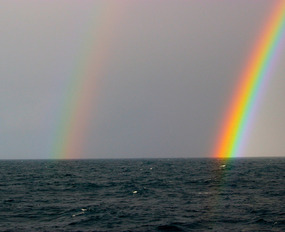 
Three quarters of the 3,000 Falkland Islands residents reside in this quaint and colorful seaside town. People from 60 nations live here, and many can trace their heritage back through 9 generations in the islands. Predominantly British, the islands population also includes large Chilean and St. Helenian communities. They enjoy satellite-provided internet connectivity even at the most remote farms, which also use wind turbines for 24-hour power. Awesome! Stanley itself has 6 large wind turbines that provide over 40% of their electricity. Flowers everywhere, including so many different colored introduced lupines. 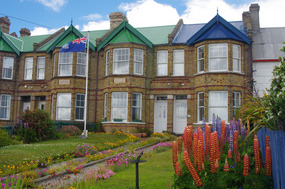 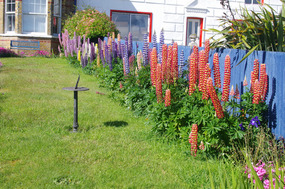 
This is also the home port of the Research/Survey logistics vessel for the British Antarctic Survey, the ice breaker "Ernest Shackleton", built in 1995. And interestingly, on the hillside across the bay is a huge rock sign commemorating Shackleton's ship ENDURANCE… 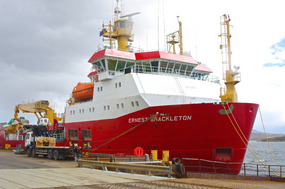 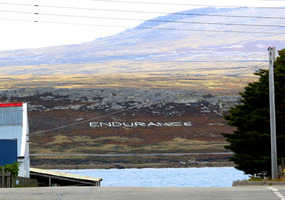 Tribute to Shackleton's Voyage...
We visited a fantastic museum about the Falkland Islands and Antarctica, including records of the 1982 Argentine/British war that you might remember when Argentine armored personnel carriers, several thousand men, and artillery invaded this sleepy little town to snatch it from the British. An ugly little war ensued rather quickly as Iron Lady Margaret Thatcher quickly sent in British troops and lots of firepower, and although the U.S. “officially” maintained neutrality, Ronald Reagan secretly promised to loan the British a warship (the amphibious warship USS Iwo Jima) if they lost an aircraft carrier. Interestingly, this information only surfaced in June of 2012 by John Lehman, former U.S. Secretary of the Navy. Many soldiers on both sides died before Argentinian forces withdrew, but fortunately the citizens were not caught in the crossfire. Since then these proud Brits have kept a more substantial presence in the Falklands and on South Georgia Island, and they fly the Union Jack on every available post, even painted on their buildings and dumpsters! And there's even a bronze bust of "Maggie" near their central park area looking out over the Bay to “keep watch over them." The general scuttlebutt is that the war was all about petroleum for the Brits and trying a slight of hand by Argentina’s failing government… its easier to hide failing policies and a failing government by inciting nationalism among the populous... Hmmmm.... does that sound familiar??? Fun morning, but every step of the way was accompanied by 25+ knot winds. 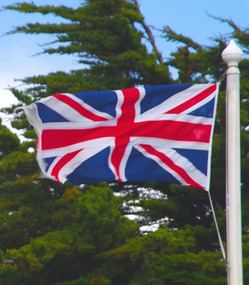 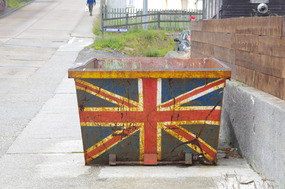 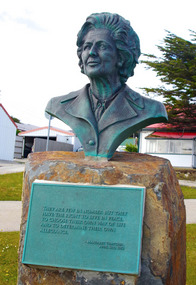 MAGGIE watching over the town... 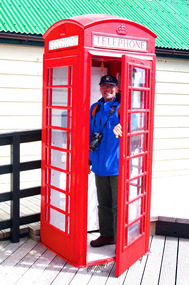 
Even though we've only been gone a week, Roger felt he REALLY NEEDED to call his sweetheart back home... But no matter how many coins he jammed into the British phone, he couldn't get a dial tone!...


We also ran across some remnants from the ugly whaling days... including an arch of Blue Whale jaw bones at the gate to the local park and an old powerful harpoon gun... 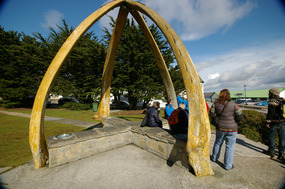 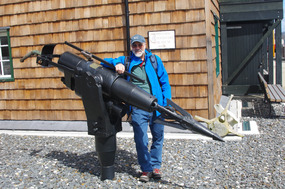 YES, HE IS going out to hunt whales...
description

The rest of our day was spent at sea heading to South Georgia Island, which is a two-day trip, 800 miles away. We spent a fair amount of time on deck in moderately rolling and windy seas watching birds -- mostly albatrosses, giant petrels, smaller petrels, and prions with a few distant whale spouts (likely Sei whales). We also had our first briefing to go kayaking. We are DEFINITELY psyched about that!

Thanks for sharing! Love all of this...

love your photos and sharing your knowledge

Appreciate the information. Looks like you are having a most memorable trip.