We have now completed a full day and night at sea traveling to South Georgia Island. During these types of days, we are pretty much "steaming" ahead without any Zodiac stops along the way (nothing to land on anyway!). Instead, we are entertained by various lectures by the naturalists, geologists, historians, etc. They are extremely knowledgeable about all the natural sciences including bird and mammal identification and ecology, geology, and history of the Southern Ocean. A nice additional aspect is we will get a link to a closed section of Zegrahms website where we can access all the presentations we are seeing when we return. This should really help when we share our experiences back home. At first we were a little disappointed that the Ocean Diamond was such a large vessel as we knew that would mean more passengers would be on board making the beach landings that much more complicated and lengthy and more people on the beach. This initial disappointment has now turned into a much more positive attitude. We have learned the Ocean Diamond is both faster (3+ knts) and more stable at sea (with stabilzers) than the smaller vessel that Zegrahm typically uses. So far the beach landings, which involve all passengers climbing into Zodiac inflatable rafts (10 passengers + driver), has gone very smoothly and once on the beach the colonies of penguins, seabirds, fur seals, elephant seals, and the various remnants of whaling/sealing stations have been so large we can roam around and both be near other travelers or pretty isolated for long periods of time.

In the afternoon we had a briefing by a representative from the International Association of Antarctic Tour Operators (IAATO). Activities in the Antarctic are governed by the Antarctic Treaty of 1959 and associated agreements, referred to collectively as the Antarctic Treaty System. The Treaty established Antarctica as a zone of peace and science. In 1991, the Antarctic Treaty Consultative Parties adopted the Protocol on Environmental Protection to the Antarctic Treaty, which designates the Antarctic as a natural reserve. The Protocol sets out environmental principles procedures and obligations for the comprehensive protection of the Antarctic environment, and its dependent and associated ecosystems. The Consultative parties have agreed that as far as possible and in accordance with their legal system, the provisions of the Protocol should be applied as appropriate. That Environmental Protocol was ratified in January 1998. We were educated on the efforts in place to protect Antarctic resources, both physical, biological and ecological, which we will be following throughout our expedition. Zegrahm is a staunch supporter of IAATO and worked diligently to enforce every effort to maintain compliance with the IAATO Treaty. We wholeheartedly respect and appreciate their approaches in this regard.

This evening we watched Part One of the movie "Shackleton," which was well done and apparently pretty accurate to his real life. Zegrahm folks also made popcorn for the crowd, all 170 of us, and handed the popcorn out in old-fashioned red and white striped cardboard box-like containers. Nice touch.

On our time at sea to South Georgia Island, we saw many of the same oceanic birds that were described in some of the previous Entries, so will not be repeated here. However, there is lots to come... 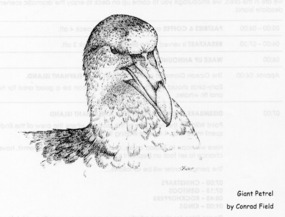 Quite the artist! So glad you were not sea sick!