Another day spent at sea. We have now reached the edge of the Scotia Sea. The Scotia Sea sits atop the Scotia Plate and is located at the northern edge of the Southern Ocean at its boundary with the South Atlantic Ocean. It is bounded on the west by the Drake Passage and on the north, east and south by the Scotia Arc, an undersea ridge and island arc system supporting various islands.

Around 10am we twice circled around the sea stacks known as Shag Rocks. The Shag Rocks are six small islands 240 km (150 mi) west of the main island of South Georgia and 1,000 km (620 mi) off the Falkland Islands. Shag Rocks cover a total area of less than 20 hectares (49 acres). Situated on the South Georgia Ridge, they have a peak elevation above sea level of 75 metres (246 ft), and stand in water approximately 319 metres (1,047 ft) deep. Temperatures average −1.2 °C (29.8 °F), rarely climbing above 15 °C (59 °F). There is no significant vegetation. The main wildlife found on the islands are the South Georgia shags, Prions and Wandering albatrosses.

The Shag Rocks were possibly discovered by Jose de la Llana in 1762, and originally named the Aurora Islands, after his ship. However, the Aurora Islands are considered by many to have been a mistaken sighting that was coincidentally near the Shag Rocks, which were known to sealers prior to 1823. They were later rediscovered by James Sheffield and given their current name, for the thousands of Blue-eyed (Imperial) Shags that nest and breed on these rocks. (Note: the Brits use the term shags whereas we call these birds cormorants; a close relative of pelicans possessing a small gular pouch like the big pouch hanging from the lower jaw of a pelican, they regularly dive to 60m or more to catch fish, and are strong flyers). Shag Rocks are very rugged and isolated and we find it so crazy that way out here in the rough and tumble Scotia Sea these birds some how find nest material and successfully raise chicks on open rock faces with winds that regularly can reach 80+ mph. Nests are all over the place from the very highest ridge tops to the jagged cliffs and lesser peaks below. Apparently, we were extremely lucky to see these colonies so clearly in our circling as normally these islands and colonies are either socked in with fog or its blowing and raining so hard that even if you willing to brave the elements your binoculars and camera are of no use. 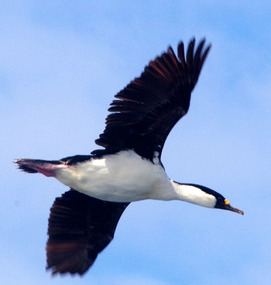 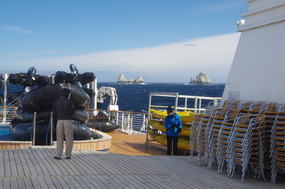 Shag Rocks from the stern... 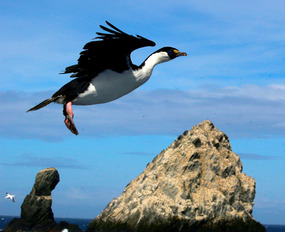 Coming in for a landing?? 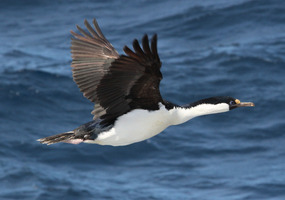 
Blue-eyed (Imperial) Shag [Phalacrocorax atriceps]: Note the blue skin surrounding the eye, and the orange/yellow growth at the base of the beak that becomes enlarged during the breeding season. 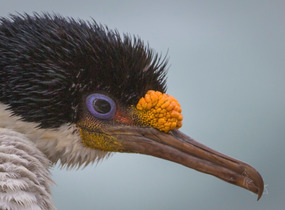 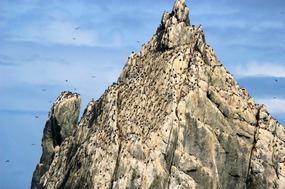 Shag Rocks: see the tiny dots (Shags) if you can.. 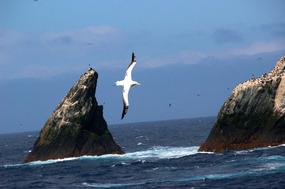 Are you looking forward to "tornorrow's" landing at South Georgia Island as much as I am?