TODAY... we have finally crossed over into the political boundary of Antarctic waters having reached 60 degrees south latitude. Activities in the Antarctic are governed by the Antarctic Treaty of 1959 and associated agreements, referred to collectively as the Antarctic Treaty System, which established Antarctica as a zone of peace and science. Antarctica has no indigenous people, no permanent inhabitants and is not the sovereign territory of any nation. The Treaty came about during the first half of the twentieth century (it was ultimately signed in 1959) as a way to deal with multiple territorial claims made by seven nations: Norway, Australia, France, New Zealand, Chile, Argentina and the United Kingdom. It's complicated, but the Treaty dealt with those multiple claims basically by ignoring them, but that has actually worked out pretty effectively. It merely gets on with the business of governing the continent as a large scientific laboratory, and more recently as a tourist playground. Neither the United States nor Russia have made a territorial claim on Antarctica, but both have reserved the right to do so. However, both countries have established a massive presence in Antarctica. In the five decades since the Treaty was originally signed, 36 more countries have joined the club.

Up about 6am. We have finally moved out of the reach of the storm and have moved into calmer waters. The gentle rocking of the ship throughout the night is very conducive to luxurious sleep. This is enhanced by the fact that we have chosen a mid-ship and mid-level cabin, which results in the least amount of movement in all three planes of movement: up-down, front-back and left-right. Today the seas are relatively calm (~ 1m swells) and the waters are deep (3,000 m) so there is little shoreline rebound influence of waves. Birds are pretty sparse and only a few whale spouts, but we do start to see some killer whales and more icebergs, some with penguins on them. Ship moving quickly, ~15 knots. Sun came out briefly, otherwise, mostly cloudy. The hard-core birders are staked out at the bow next to the bridge observing anything that is criss-crossing the ship's path, basically... "anything that moves"!... hard core.... 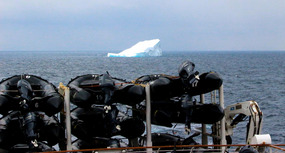 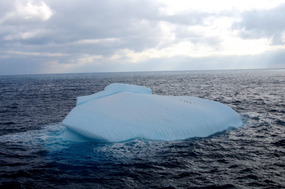 ICEBERG -- can you see the four Gentoo penguins..?
description 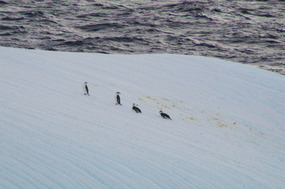 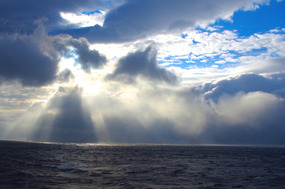 
Interestingly, Conrad Field (biologist from the Zegrahm staff) indicated that whales have been shown to live extremely long lives. Ear bones can only age them so far, maybe to about 75 yrs, but the general consensus is that they may live into the hundreds of years. A few years ago a very old harpoon, which was dated to 1864, was found in a recently dead bowhead whale suggesting that it was over 150 yrs old. Pretty amazing to think these whales can live so long and one is left feeling the whaling era is even more tragic and sad.

Later this day the swells and sea increased to about 2-3m, with lots of wind. The spray splashing up from each side of the bow had a beautiful blue hue with an occasional rainbow sheen.

April 9, 1917:
Last we heard... After nearly 8 months of living on an ice floe, it split in two and Shackleton’s "party" (and I use that term loosely!) was forced to take to their lifeboats and head for the nearest land. After five more harrowing days at sea, the exhausted men navigated and landed their three lifeboats at Elephant Island, 346 miles from where the Endurance sank! 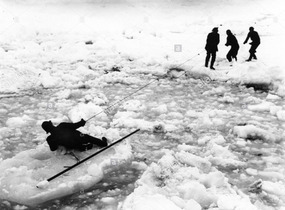 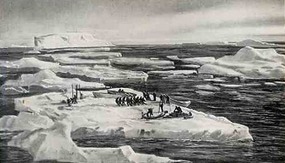 
.... When the men finally make land, they dance along the "beach" and let the pebbles dribble through their hands. Despite the fact this was "an inhospitable place, devoid of any vegetation, covered with glaciers and swept by ice laden surges of the South Atlantic Ocean," the men are overjoyed; this is the first time they’ve been on solid ground in 497 days. 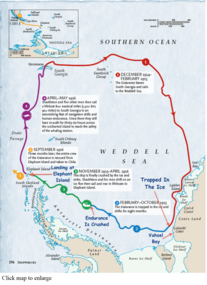 
However, Shackleton realizes that their landing spot is too open to wind and waves, and the men must get back in the boats and move another 7 miles around the end of the island. The men finally made camp at what was later named Point Wild - after Frank Wild, the designated Leader of the men stranded on Elephant Island. John Robert Francis Wild (1873--1939), known as Frank Wild, was an explorer. He went on five expeditions to Antarctica for which he was awarded the Polar Medal with four bars (was that for being "brave?" or....?), one of only two men to be so honored, the other being Ernest Joyce.

Shackleton chose this site for a couple of reasons: first, it was in the middle of a Gentoo penguin colony, so he figured if the penguins could survive the winter there, so could they... (Really....??? I didn't see any feathers on Shackleton's crew, nor the ability of his men to dive into freezing cold ocean waters and dive hundreds of feet down for food...!) But, he figured the penguins themselves could also provide them with a reasonable amount of food...

..... Upon landing and making camp, the men are greatly relieved, believing they will be able to spend the winter on the island ( Oh, JOY...) and possibly be picked up by whalers in the spring (or not...). 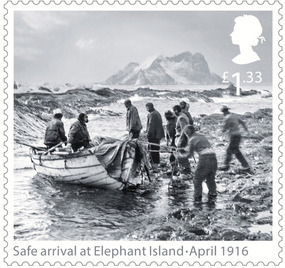 Commemorative Stamp of Arrival at Elephant Is...

After their "celebration"... they constructed a make-shift hut on the only space that appeared to be free of wave action, in the middle of a smelly penguin colony. Their “home away from home” was two over turned lifeboats with sail cloth on top of a rock wall foundation to make a really nice(?) little hotel (?) for themselves, making it feel just like home (?)... with all the amenities of 20th Century England (?)... Couldn't ask for anything more, right?. At this point, I think they were bucking for a Darwin Award! For 105 days they suffered starvation, thirst, bone-chilling cold, frostbite (with associated digits being chopped off), and an uncertain future.... 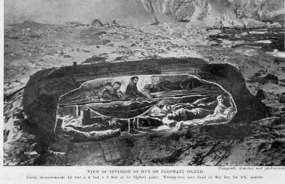 DIAGRAM: INSIDE THE ELEPHANT ISLAND "HOTEL"... 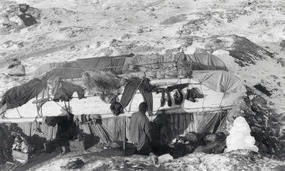 OK.... The GOOD NEWS IS: They finally got to land (a tiny little rock in the middle of the Antarctic Ocean)!

But, THE BAD NEWS IS: ... Shackleton finally (after about the first day) realizes there will not be enough food on the island to last through the winter...

Enjoyed the Shavkeleton story and photos. Of course, the whale stuff and photos are fun

My kids won't complain about our "Glamping" any more!