After breakfast, we left the Antarctic Continent behind and started our trek almost due north to Ushuaia across the 625 mile wide Drake Passage. For those of you who don’t remember your grade school history and geography lessons, the Drake Passage is the treacherous stretch of oceanbetween the southern tip of South America (at Cape Horn) and the northernmost reaches of Antarctica. There, the otherwise unimpeded waves of the vast Southern Ocean squeeze through the relatively narrow and shallow bottleneck of the Drake Passage, and in the process, generate complicated, unpredictable and often brutal weather. In the past, the passage around Cape Horn was an important trade route connecting the Pacific and Atlantic Oceans. It was also considered the most dangerous ship passage in the world. Sailing vessels could take weeks just to round the Horn. Violent, chaotic, notorious: these are common words used to describe the weather in the Drake Passage. Unpredictable is another. Because in the two days that it takes to navigate a large, motorized ship through the passage, one might manage to avoid bad weather all together. This condition is commonly referred to by Antarctic-bound passengers as “The Drake Lake”. There is no significant land anywhere around the world at the latitudes of Drake Passage, which is important to the unimpeded flow of the Antarctic Circumpolar Current which carries a huge volume of water (about 600 times the flow of the Amazon River) through the Passage and around Antarctica.The passage receives its English-language name from the 16th-century English privateer Sir Francis Drake. Drake's only remaining ship, after having passed through the Strait of Magellan, was blown far south in September 1578. This incident implied an open connection between the Atlantic and Pacific oceans. Half a century earlier, after a gale had pushed them south from the entrance of the Strait of Magellan, the crew of the Spanish navigator Francisco de Hoces thought they saw a land's end and possibly inferred this passage in 1525.For this reason, some Spanish and Latin American historians and sources call it Mar de Hoces after Francisco de Hoces. The first recorded voyage through the passage was that of Eendracht, captained by the Dutch navigator Willem Schouten in 1616, naming Cape Horn in the process.

Somebody must be smiling down on us because at least so far (mid-day) we have very calm seas, with minimal swells and no white caps... Definitely a "Drake Lake" effect... We have all been holding our breath in anticipation of this leg of the trip since it has the reputation of being one of the worst bodies of water in the world. Some of the expedition ships have tie-down straps on all bunks to secure the passengers during the Drake Passage crossings...

Later this evening, Tom Sharpe and the rest of the staff conducted a live auction of t-shirts, sweatshirts, several of Conrad Field's stippled drawings of Antarctic life, various badges, wines, and other donated items to support the South Georgia Habitat Restoration Project. These items brought GOBS of money into their till and helped support needed restoration of areas that support bird and mammal rookeries, etc. Very fun time had by all... I think the total was somewhere around $6K.

Some of you reading this have shared your own experiences with me regarding rough crossings. One story from Dennis indicated 80 ft waves, and another rough crossing by Kim indicated that by the end of the crossing, a large piano that was bolted to the floor was completely flipped over! Knock on wood that we don't hit those kinds of conditions… and we didn’t! 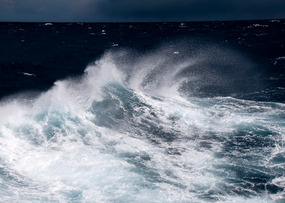 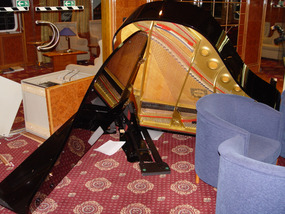 ANYONE CARE FOR A PIANO CONCERTO ??
description

It did get rougher as we approached Cape Horn, with swells of 2-3 m, but nothing like it could be. Dan, the expedition leader got permission for our ship to go close to Cape Horn as we wound our way back to Ushuaia. It was blowin’ pretty hard at that point, about 40 knots (~ 60mph). As we approach the Cape, can’t help but wonder what Magellan and Darwin thought about this wild and OTHER-WORLDLY land… 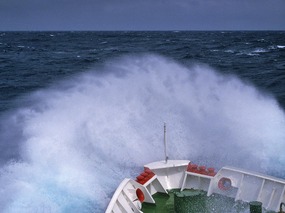 A "TYPICAL" DAY ALONG THE DRAKE PASSAGE...
description 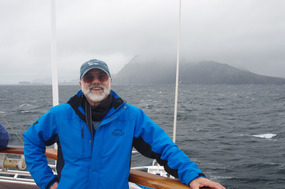 I'm loving the history lessons… so glad you made it safely around the Horn.

Boy, did you luck out!!! So glad! And little did you know what a storm you were coming back to here in the US... our seas were rougher than yours, it appears! So glad for this trip for you! You have done a great job on this blog, sweetie!

Surprised you can smile.....or, is it frozen! Great job on the blog. I know I will never travel there. But I understand it must be one of the best thrills in many ways