-
The highway follows the Teslin Lake, which was still frozen. Crossing the road was a wolf with a small animal in its mouth. When it reached the woods, it turned it's head, and looked right at us. The drive to Skagway was the most spectacular scenery yet, especially from Carcross to Skagway!! The mountains are really heavy with snow, the lakes are frozen, and lots of waterfalls. Saw a tiny bear on the side of the road standing up on a tree playing with the branches. This is a drive not to miss!! (or take the train) 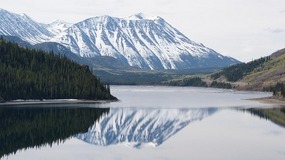 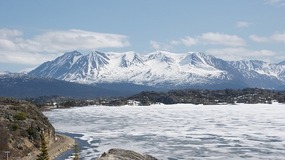 Skagway drive Pitchfork Falls
Campground: Garden City RV - nice park, good location. Spent 3 nights here
The Skagway National Park Visitor Center was a perfect first stop--really informative and even free; all a MUST DO. Saw the movie "Gold Fever, Rush to the Klondike" and "Women of the Yukon Gold Rush."  Both films really gave a good description of what it was like for the 100,000 people that came here looking for gold. Also, went on the historic city tour with a park ranger, which included Soapy Smith's Parlor, restored Mascot Saloon, Moore's cabin & house, which has the piano that was used to record the Alaska State song. The sheet music was there, and a lady on the tour played the song.
Town: There was only one tour ship in port so it wasn't that crowded in town. Of course, had to do all the shops, then the small boat harbor, Gold Rush Cemetery, hiked Lower Reid Falls, and Dyea Road scenic viewpoint. This town is full of young people that come here for the summer to work. Skagway has about 600 permanent residents; during the summer, there are about 1200.

Walked Lower Dewey Lake trail, which is 1 mile; it took us 2 hours--boy are we slow!! It's a good trail across several wooden bridges but it's a steep climb through a series of switchbacks going over the mountain. The lake was nice but nothing fantastic.
Corrington Museum was very interesting. Their gift shop has quite an assortment of authentic Alaskan-made items. Randy was interested in Yulu knives and found one he liked with a handle made out of birch wood. In order to get the unique dark markings in the wood, the tree is dried out for a year after it is cut, and the sap goes through the wood causing the markings.

Red Onion Saloon
Several great places to EAT, which is always one of our top priorities! The Red Onion, a former brothel, was Randy's first choice. The Skagway Brewing Co makes Cedar Top beer that is made only here. The spruce tree tips are hand picked every season and their addition creates a malty sweet ale that also gives a dose of Vitamin C; how about that, healthy beer! Had to try this even though we aren't beer drinkers. A guy told us the Starfire, a Thai restaurant, had the best fried rice you'll ever eat--it was fantastic! Bonanza Bar & Grill, halibut & fries--good, not great.
Would have liked to see the Soapy Smith show "Days of '98" but it was closed on Sundays.
It's finally getting warmer--nights in the 40's; days mid 60's; nice and sunny for the past 4 days!
Other Entries
-