-
Stopped at Caribou Crossing, which is a place the tour buses bring people--very touristy and not worth the stop. Also stopped at Emerald Lake, which was beautiful. 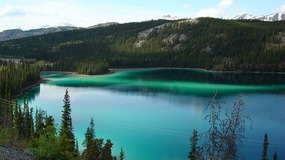 
At the Whitehorse Visitor Center, watched a 15-minute film about the Yukon. Found out many of the attractions do not open until June--Trolley, boat to Miles Canyon, Yukon Conservation nature walks.

Shopped at the North End Gallery, which has really nice things. It's the first time I saw a picture of flowers made out of "moose tuft."

Ate dinner at the Yukon BBQ; the halibut and fries were fantastic.

Walked part of the Millennium trail, which goes along the entire Yukon riverfront. The refurbished SS Klondike sits next to the river. 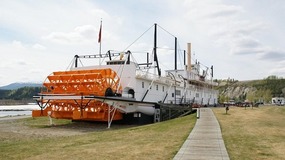 
The longest fish ladder in the world is here so walked part of the trail to see it; then realized you can drive to the top. 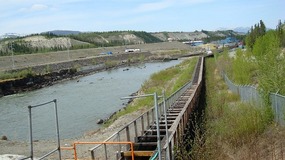 Fish Ladder
Talked with a man working at the power plant that takes care of maintaining the ladder; he was getting all the big pieces of ice out of it. 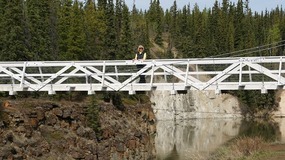 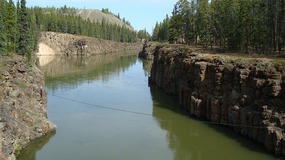 At Miles Canyon and the Suspension Bridge, we walked the trails part way on both sides of the canyon. The quest for the perfect canyon picture proved to be a climb. Saw a beaver swimming. 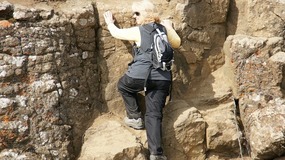 Drove Grey Mountain road to a viewpoint that we thought overlooked the downtown and river; it didn't. A better view was from the Yukon College Arts Centre.

Went to the Frantic Follies Vaudeville Revue show, and our cheeks hurt from laughing so much! It was a great show. 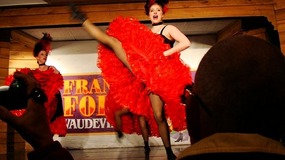 
The campground is nice; however, our site wasn't very wide--had to move the tree branches out of the way while driving into it. It's in a very convenient location for getting to downtown.