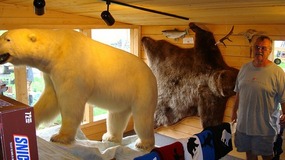 Tatlanika Trading Co Polar Bear
On most of the drive to Denali, it rained. The views of the Tanana River Valley were beautiful. The Tatlanika Trading Company was definitely an interesting stop! The 1500 lb. polar bear is worth seeing. They have a great assortment of mounted animals and Alaska handmade items. Especially interesting was the display showing how fur that is shed from the sled dogs is used to make yarn—never heard of this before. Every stop is a learning experience—especially for us Floridians! As we got closer to Denali, the dark clouds covering the mountains with light shining over white clouds was a very unique view. Even on a cloudy, rainy day, the views are beautiful here! Decided to stay at the Denali Motel & RV park because we like our electricity, water, and sewer too much to stay in the Denali campgrounds. The RV park is right on the highway about a 15-min drive to Denali, and the people running it are extremely nice. Their information about whether to take the shuttle bus -vs- the tour bus to Wonder Lake was very helpful. We coordinated destinations so our Tennessee friends are here also. 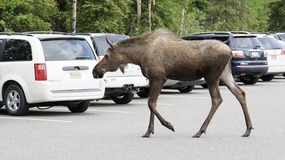 Denali--Moose in parking lot
Our first day in Denali was totally overcast, cold and windy (rained all night long) and only got up to 53--brrrrr. A good day to spend at the Visitor Center looking at their many informative exhibits and watching the film about Denali. The park staff was very helpful about the ranger-led hikes as well as other hiking trails we might like. The next stop was the Wilderness Access Center (WAC) to make bus arrangements. We've heard that people see lots of animals in Denali. Would you believe a moose in the parking lot? What a surprise! The weather forecast said the only sunny day for the next week would be on June 8 so that’s the day we booked our bus. Several people we talked with said there isn’t much to see going all the way to Kantishna, so we decided to go as far as Eielson and then upgrade to Wonder Lake if the day was good and Mt. McKinley was visible. We drove to Savage River, which is as far as you can go in your own vehicle. Didn’t see any animals until we were on our way out by the Visitor Center--a moose next to the road. We coordinated shuttle bus plans with our Tennessee friends and went the next morning to get the tickets. 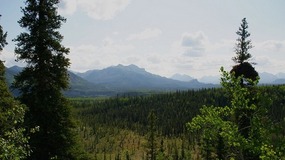 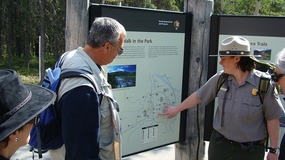 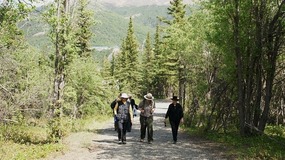 Denali--McKinley Station Trail
At 1:00 we took the Ranger-led hike along the McKinley Station Trail, which goes next to Riley Creek. Only six people so it was like a private tour. The ranger showed us several kinds of berry bushes, where some of the buildings were that we saw in the film, and some of the wild flowers. Didn’t know that Bluebells are edible; people put them in their salads. Tasted sort of like bitter cucumbers. She also did several things to make us appreciate the wilderness and read us a wilderness poem. Thoroughly enjoyed all the ranger had to tell us. Ate lunch at the Visitor Center Cafe; the burgers were really good—waffle fries too.

Denali--Dog Sled Demo
Took the shuttle bus to the Dog Sled Demonstration, which was excellent. First, everyone walks around the area where they keep the dogs; you can even pet them. Then, the dogs were hooked up to a dog sled and they pulled it around a gravel path—at lightening speed! It was amazing how excited the dogs got when they were hooked up to the sled.

Denali - Mt McKinley
Hurray, we lucked out and have a sunny day for our Shuttle Bus to Wonder Lake. For once we can thank the weather station! While waiting for our bus that left at 7:00 am and chatting with different people, we found out sitting on the left side of the bus was preferable because that’s the side from which Mt. McKinley would be visible. We lucked out and had a cloudless view of the mountain—AMAZING!!   Some clouds did cover the tip of it in the afternoon. Took lots of pictures; however, they never look as good as when you see it. The shuttle bus driver was quite knowledgeable and told us various facts along the way. The best part was stopping for animals 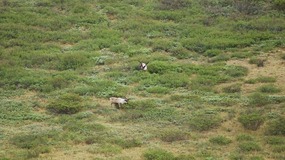 Denali Shuttle Bus--Dall Sheep
so everyone could get a view. Along the way, a Timber Wolf walked right down the road and weaved its way among the five or so buses that were stopped to watch. Saw several Caribou, Ptarmigan, Golden Eagles, and Dall Sheep high up in the mountains. Having good binoculars is a must if you want to see the animals. 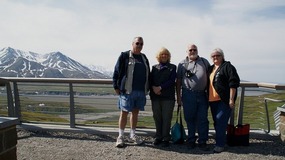 Eielson with TN Friends
When we got to the Eielson Visitor Center, we paid the extra

Denali--Mt McKinley view from Wonder Lake
money and the dispatcher put us on the next bus to Wonder Lake.  This driver really knew her birds and would point them out—saw Scooter (black with orange bill). Mt. McKinley views are really dramatic at Wonder Lake and it is definitely worth going this far. 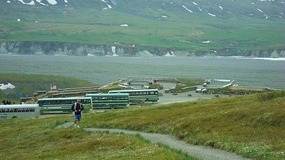 Denali--Eielson Visitor Center trail
When we went back to the

Denali--Eielson Visitor Center Quilt
Eielson station, Randy and I got off the bus to hike a few of the paths there. The Artic Squirrels are everywhere and are fun to watch dart in and out of their holes. During the winter, their body temperature goes down to 30 degrees and lots of research is done on them. In the Eielson Visitor Center, the quilt wall hanging depicting Denali in all its seasons and the animals that live there is truly a work of art.

Denali Shuttle Bus--Eagle
The bus we caught on the way back had the people that took the Discovery Hike. Sat next to a newly wed couple from Tampa, Florida, and talked to them the entire way back. He told us about a fruit he picked off a tree in Key West called Guinip; we’ve never heard of it. On the way, saw another Golden Eagle—they have a wing span of 7 feet. The highlight was seeing a grizzly with her two new cubs right next to the road. The cubs were only about four months old. The one cub actually came up to the road, stood up on its hind legs, and looked right at the bus.

Denali Shuttle Bus--Bear baby
We sure felt privileged to see this. Got back to the WAC around 8:00 pm, and met the newly weds at Lynx Pizza next to the Princess Lodge. The pizza was really good, and we had a great time talking with them.  What a day—unbelievable scenery, animal sightings, and meeting new people! It doesn’t get much better than this!! 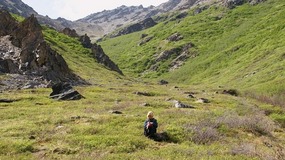 Denali--Savage River walk
Took the Shuttle Bus to Savage River to hike the loop trail that goes along the river. Saw Dall Sheep about a mile down the trail above the bridge that crosses the river. We climbed a little way up the mountain, found a rock that would fit our behinds, and sat for a long time watching them through the binoculars.

Denali--Savage River walk Dall Sheep
The ram would stand a little above the rest and watch the females with the two lambs. We were there about three hours. For lunch ate burgers again at the café by the Visitor Center. Took a drive south to the McKinley Café for their cinnamon buns, which are huge—they should be for $6 each. They also had strawberry rhubarb coffee cake, which was too good to pass up--warmed with whipped cream—fantastic! Ate the cinnamon buns for breakfast the next morning—not that great. 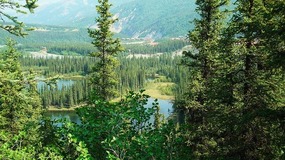 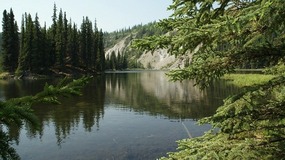 Denali--Horseshoe Lake
Took the Ranger-led hike along the Taiga & Horseshoe Lake trails. There were probably 15 people on this hike. The ranger told us about the trees—only seven kinds grow in these temperatures. She gave each of us a sheet with a tree, plant, or flower. When found, we would show it to the rest of the group. Great way to find out about what we’re seeing as we walk. Some of the people in the group really knew their plants and told us all kinds of information. The view of Horseshoe Lake from the top of the mountain was spectacular. Then we hiked down to it; very pretty but way too many mosquitoes. The ranger had us sing a song "The Outsider’s Lament" to the tune of “This Land is Your Land.”  Then the dreaded walk back up.

June 11
Drove to Savage River since we would have had to wait 45 minutes for the bus. There were six Caribou lying right by the bridge where you park.

Denali--Savage River--Caribou
We walked across the road, sat along the hillside, watched them with the binoculars, and took lots of pictures. 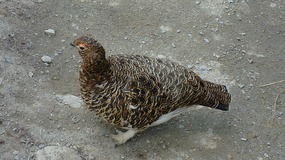 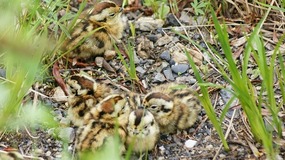 Denali--Savage River--Ptarmigan chicks
As we were walking down the trail, a Ptarmigan came across right in front of us with about 8 little chicks. The male was there also making all kinds of noise. Watched them for quite a while. 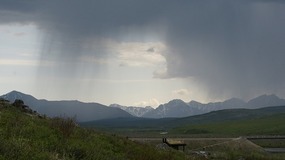 Denali - Savage River
Met a couple from Croatia. He had a camera like Randy’s and really liked the zoom lens on it and the walking stick with the camera attachment. The guy was funny—he didn’t know whether to thank Randy or be sorry he ran into us because now he must have these and will have to spend more money. We were about ¾ the way down one side of the trail, and it started to thunder and lightning in the distance so we turned around and hustled to the car. 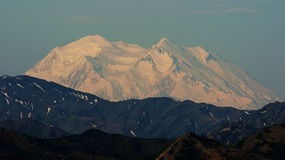 
Our stay in Denali was just about as perfect as you can get. Apparently, there is only a 30% chance to see the mountain because of all the clouds--and we got to see it. Spectacular!!
Other Entries
-