-
June 13:  It's always fun to attend local events, and Palmer's fair was being held. One of the booths had very nice, reasonably priced birch baskets made by a local man. The lady helping him in the booth moved here from Florida. He was her high school sweetheart. Ended up talking a long time about the winters in Anchorage.
Heard about Mataluska Dairy so had to get some of their ice cream, which is a little pricey--$8 for half a gallon. It is very creamy; you can feel the calories going on as you eat!
Drove to Wasilla to eat at the BBQ place we saw at the fair; couldn't find it. Even the policeman we asked never heard of it. Ended up at the Hacienda for dinner, which was very good.
As usual, we ended the day with our Tennessee friends at the "picnic table talk time." Thank goodness for the Therma Cell; it definitely kept mosquitoes away!
June 14: The Fox Run RV Park campground is in Palmer, which is north of Anchorage. It takes about half an hour to drive into Anchorage; it's expressway so the drive is pretty easy. 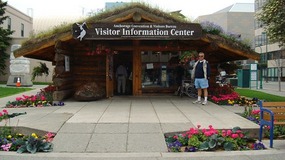 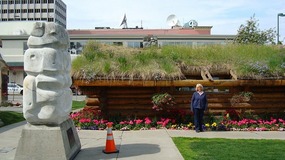 Log Cabin Visitor Center in downtown Anchorage. There is sod on the roof just like they used to build them. Wonder if they have to cut the grass?
Walked through the Hilton Hotel lobby to see the registration desk that is made out of jade—pretty impressive!
The Saturday Market was really good—large variety of booths and food. Had to try the salmon quesadillas that we read about; they were OK—wouldn’t get them again.
Went to the salmon fish ladder on Ship Creek; no salmon. A few people were fishing, and we were told a lady earlier in the day caught a 34-pound salmon. 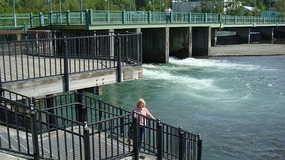 Anchorage Ship Creek
Visited the Ulu Factory, but they don’t make them on Sunday. There was a video and a man told us all about them. He demonstrated how to use it, and we bought one for the RV. Hurray, that means Randy will do all the chopping. (ha-ha)
June 15: Spent the day at the Alaska Native Heritage Center, which was wonderful! 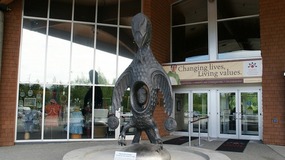 Native Heritage Center
The center makes visitors aware of the various cultural groups that are in the state and teaches students about their heritage.   There were demonstrations about the native cultures—storytelling, dances, and games; films about the different groups; and traditional village sites surrounding a lake. At each site, students told about the specific traditions of their native people. 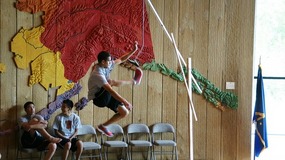 Native Heritage Center - Games
This was a great way to learn about the various native cultures and to teach the young people about their heritage! Talked with one of the students, and he is learning how to carve. He is working on his first rattle, which he enthusiastically showed us. It’s very impressive to see the youth learning the crafts of their heritage! The gift shop has unique arts and crafts representing all the cultures. There were about five artists demonstrating and selling what they made. The lunch was even really good!   Burgers grilled outside, coconut shrimp, and yummy coated fries.
**See more pictures at bottom of page**
Several people told us about the Moose Tooth restaurant, which was our dinner destination for pizza. Everyone was right; it was fantastic. They even make their own root beer. Our waiter was very personable; told us about the log house he is building and cutting the logs himself. Good thing we got there a little early because a line formed very soon.
Thought we’d walk some of dinner off at Earthquake Park; didn’t even read all the earthquake plaques before the mosquitoes drove us back to the car.

Anchorage view frorm Pt Woronzof
Drove along the road next to Tony Knowles Coastal Trail to Point Woronzof where the view of Knit Arm and the mountains was impressive. No beluga whales but it was a warm, sunny evening and the breeze made it mosquitoe free. The tour book says it’s a good place to watch the sunset; however, that’s way past our bedtime—it’s still light at midnight! Suddenly we hear this plane, and it sounds like it’s going to land right on us. It was a plane taking off at the airport that is across the street from the Point. The planes are right above the trees when they take off, and was it ever startling the first time we saw one! Talked with a man who has lived here 40 years, and he entertained us with several "only in Alaska" stories. Story #1: There is a 34’ tide range, and it comes in very fast. Three teenagers were in a sandbar when the tide came in. First, they were in water to their knees when people noticed they were in trouble and called the local fire department that sent a rescue boat. The rescue was just in time because the water was up to their chest by then. Story #2: He was at Beluga Point watching the wind surfers. A guy was way off shore when he fell and the board got away from him. In a matter of minutes, suddenly a float plane lands next to him, he jumps on, and away he flies. (He must have had a cell phone to call) 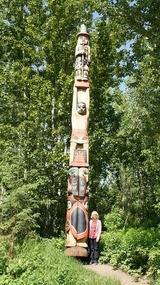 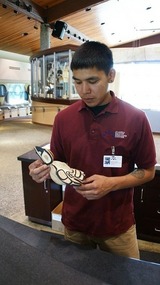 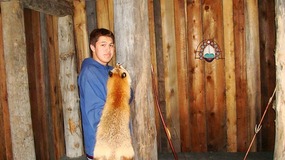 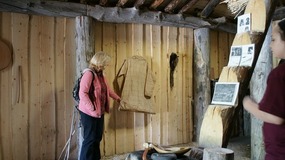 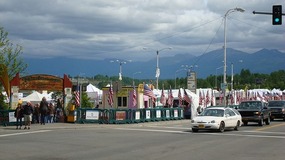