-
Campground:  Edgewater RV is in a great location right on the Kenai River, and they have a fishwalk at the campground. 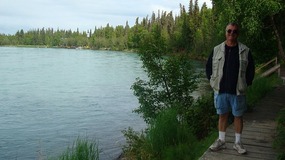 The people parked next to us were out fishing yesterday on the Russian River and suddenly a boy yells "bear." Here comes a bear out of the woods to get its share of salmon. The people all yelled; the man next to us carries a shotgun and cocked it. Luckily, the bear decided to leave. His wife was not going fishing there again. 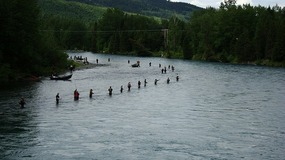 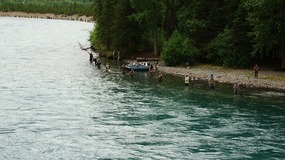 Salmon fishing is what this area is famous for the so we decided to try our luck. We drove back to the Russian River where the salmon were running. There is a ferry ( $9.50) that takes people to the other side because the salmon turn off the Kenai River to go up the Russian, and they are near the opposite side. 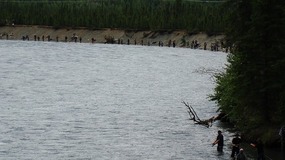 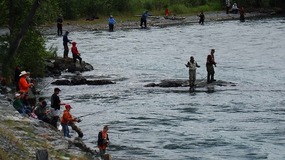 Yesterday 940 people took the ferry. The lineup for the Ferry was really long and there was nowhere to park. People were lined up right next to each other along both sides of the river “combat” fishing.   Reminded us of the boats in the Keys during lobster season--only these people are standing in the water. Pulled off the side of the road to take a picture and talked to a lady that had a patch over her eye. She got hooked in the eye in the morning, went to the clinic, and was going back fishing. 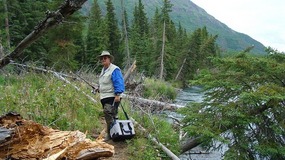 Drove down the road a bit and found a place to park where there were people fishing on the Kenai River. Put on our hip boots, grabbed our poles, and into the woods we went. Where is the path that leads to the river? There were trails everywhere. Some people finally came along so we followed them. To get to a good fishing spot, you have to walk about a mile through bear-infested woods and crawl over all these fallen trees. (And Randy complains about my hikes with nice gravel paths!) 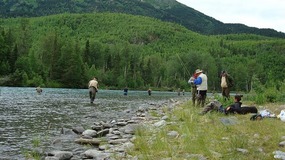 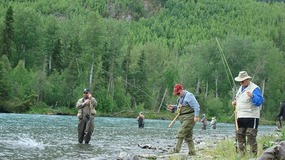 Randy asked one of the men if he had any hints for us novices. He was so nice and told us what to do with weights and flies. He even gave us a billy club to use to knock the fish out—he's optimistic. Now we’re ready to wade out into this freezing cold water. Sounds fine until you try to walk over these big river rocks that made you lose your balance all the time. Yea, I made it out past my knees without falling! Spent a couple of hours casting, trying to snag one of these salmon. 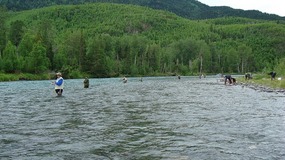 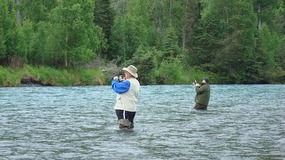 People around us were catching some but not us. A guy got a hook stuck in the back of his head and another guy had a first-aid kit to patch it up. Now I know why they call it “combat” fishing! My hook caught on a rock and I ended up breaking the line.  Oh no, I have to maneuver on these rocks again. I almost fell but my fishing pole came in handy as a walking stick. I’ll never hear the end of getting the reel wet. While I was sitting on shore, a man and his son came. He went right out where I was and in about 5 minutes caught a salmon. He definitely had the knack. A little while later, he caught another one and insisted that I reel it in. I was paranoid that I would lose his fish, but I managed to drag it on shore. 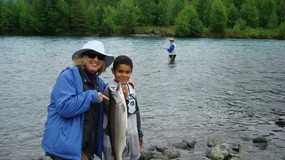 Kenai River Fishing
Took pictures to have bragging rights for reeling in a fish (I’ll leave out the catching part). The Anchorage man even gave us some pointers on casting. There definitely is a technique to catching salmon. The salmon don’t bite; you have to “snag” them in the mouth with the hook as they swim by. NOT EASY but a lot of fun! The boy got water in one of his boots so we sat on shore talking. Also talked to a guy from Switzerland, and their first time wasn't producing any results either. Left around 6:00 to trek back out—ever wary for bears. I ripped the butt on my pants when going over one of the trees—my favorite pants! Our first Alaska fishing experience was lots of fun even though we didn’t catch anything. People are so nice and very willing share their knowledge.
Spent time touring the area towns and saw the following:
SOLDOTNA: 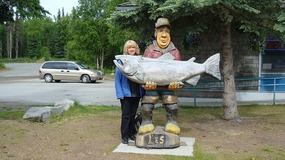 The Visitor Center had a mount of the record-breaking king salmon. Their fishwalk was really fantastic. Too bad the fish aren’t here now. There were all kinds of fish walks around town to help prevent the banks from getting destroyed.
KENAI:
National Wildlife Refuge had an interesting film. It was raining so much that we didn't do the nature walk.
You can't pass Uncle Lloyd’s without stopping to see what it's all about. There were amazing chainsaw carvings. One of the men there told us all about his gold mining.
Birch Tree Gallery gift store had lots of hand-knitted items.
Visitor Center had lots of bird mounts; there is a birdsanctuary outside of town.
Saturday Market was right across the street. There were about a dozen booths with the usual crafts and homemade items.
Several locals said the “Burger Bus” was the place to get great food; it’s truly a unique establishment! We weren’t as impressed with the food as the locals were. 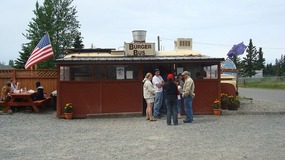 Kenai Russian Church
Beluga Point and the Erik Hanson Point overlook had great views of Cook Inlet.
Very cold and windy so we didn’t stay very long looking for those illusive beluga whales. Drove through the historic district to see the Russian Orthodix Church.
NIKISKI:  Supposed to be great views of the Cook Inlet. The weather didn’t cooperate and there wasn’t really anywhere to turn off to get to the shore. The end of Nikiski Beach Road was blocked off.  Quite shocked to see all the industry here--big oil refineries and fertilizer plant.
Other Entries
-