-
Decided to drive from Ninilchik instead of moving the RV to Homer, which is at the bottom of the Kenai penninsula. The drive is about 44 miles.
Anchor Point is on the way to Homer, and the beach road is the farthest west you can go on a road in the US. It's finally sunny and the water looked beautiful; could see a faint outline of the volcano on the other side of the Cook Inlet. 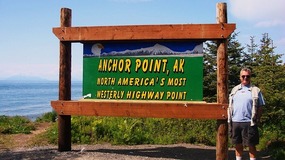 Watched four guys drive their car and boat trailer onto the beach. When they put the boat in, they missed the water and it landed on the beach. It was sort of like a Three Stooges comedy act. Drove the Old Sterling highway, which was very woodsy and curvy.
HOMER
The first time we went to Homer it was still cloudy and cold with a high of 49.
The pullout by the "Welcome to Homer" sign is a magnificent view. 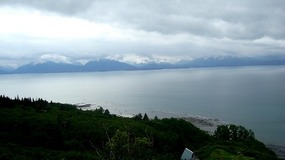 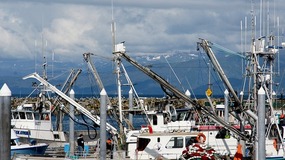 Homer Spit.
At the Homer Spit, the views of the Cook Inlet, the glaciers, and mountains are absolutely stunning. If we had it to do over, we would camp here—the views are incredible!
There are tsunami warning poles all along the spit; they are perfect for the eagles!
Spent time looking in all the little shops.
Salty Dawgs for lunch; however, it’s a saloon only so didn’t stay. A local man recommended the Boardwalk Fish-n-Chips across the street. Got the halibut and cod; both very good. Came back here another day it was so good. It’s a perfect place to look at the water while you eat.
The Alaska Islands and Oceans Visitor Center (Wildlife Refuge) is fantastic. Wow do they have a lot to offer—exhibits, films, daily ranger-led activities (walks, discovery lab, talks). The film was about the refuge areas in Alaska and what is being done in each area with sea otters, seals, and birds.  The ranger talk was about the same information but more in-depth. Talked with the volunteers; one couple is from Ft. Myers; she taught at Skyline Elementary--small world. 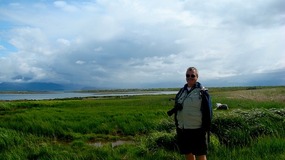 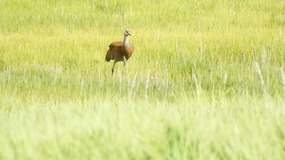 Walked along the boardwalk to Beluga Slough’s tidal marsh. Saw a Sandhill Crane and its baby (the baby is called a “colt”—learned something new again). 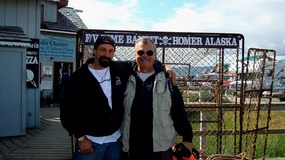 Jonathan--Time Bandit
At 5:00 went back to the Spit because Jonathan from Deadliest Catch was at his store, Time Bandit. Had to get a picture of him with Randy, who is a faithful watcher of the show. Wanted to get a hat and have Johnathan autograph it—wouldn’t you know they were out of hats.
The Skyline Drive and East End Road have unbelievable views of the glaciers--could see all three glaciers from the East End Road.
People recommended Captain Patties for dinner but we didn’t have reservations. Went across the street to Sterling Silvers and had king crab melts and chowder. The chowder was full of salmon and crab--excellent.
The second time we went to Homer was to see their Market; it didn’t open on Wednesday until July. Went to a few gift shops and to a store called Nomar, which makes their own fleece clothing. If you need warm clothes, this is the place to look.
Walked down to the Seafarer’s Memorial at the Spit. 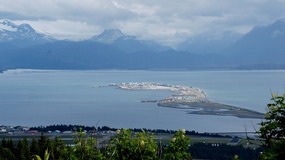 Drove down to the end and took more pictures of the mountains and glaciers because the clouds were higher and the glaciers were more visible.
Other Entries
- 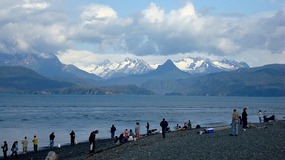