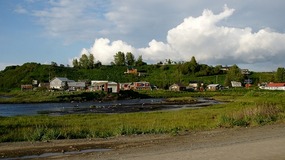 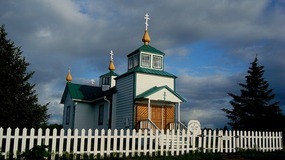 Ninilchik Russian Church
Ninilchik Village is exactly how we pictured a fishing village would look. The Russian Orthodox church is very quaint. Drove to the beach area where lots of people were camping. The Beachcomber RV, which has hookups, is right on the beach and the view is sure better than where we are staying. 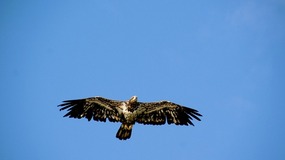 Eagle - Ninilchik Beach
It's fascinating to watch the eagles and we spent quite a while one evening taking lots of pictures; all the clam cleaning really attracts them. Watched two fighting over food and chasing one another into the hillside.

The people we’re parked next to work here during the summer. They were clamming and had two full buckets. While we were talking, we were surprised to see several eagles flying above us; this area has lots of eagles around the beaches. Our neighbors saw a moose and her calf not far from the campground so we took walks but no luck seeing them. We did have a moose cross the road in front of us on one of our drives to Homer. 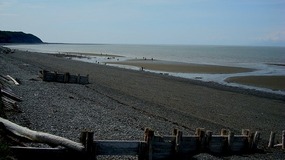 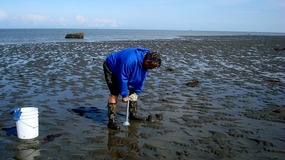 Clamming - Ninilchik Beach
After the rain finally stopped, the days were crisp and partly sunny. When it’s extreme low tide, people dig for the razor clams so we joined the crowd. Since we already had a fishing license, all we needed was a clam "gun," which makes digging easier than with a shovel. We rented one from the campground, put on our boots, and off we went to Ninilchik Beach. Lots of other people had the same idea; the beach was full of people digging. People said to look for a dimple in the sand and dig. Sounds easy enough; however, every indent in the sand looked like a dimple. Now comes the digging part—not that easy even with the clam gun. Shoving it into the sand was not too bad, but pulling it out was a real back ache. 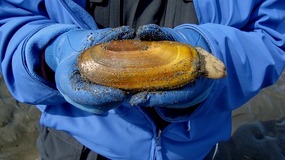 Razor Clam
Most of what we thought were dimples were misses. We did end up with 6 clams—the limit is 60 per person. That tells you how successful we were. It was a nice day in the beach muck even if we didn’t get too many. The advantage of that was we didn’t have many to clean. Before we left the beach, we went to the Café for their clam chowder—very good. Randy spent the next several hours with a heating pad on his back; getting older takes its toll! I sautéed the tender part of the clam; both of us decided we’re not that fond of eating clams. Ground up the rest of the clams and will attempt to make clam chowder. 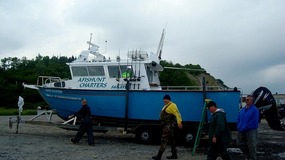 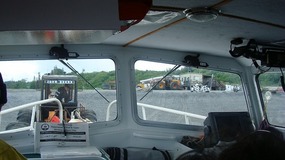 Tractor Launching Boat
Halibut fishing with AFishunt on the Hard 8 boat out of Angler RV. The boat is put in from the beach with a tractor. There were 7 of us fishing. Arthur, the captain, and Mike, the deck hand, were fantastic—baited all the hooks, helped make sure we were on the bottom, and orchestrated people’s positions so everyone landed the fish they wanted. Five-pound weights were used and it was about 130 feet of water. I seemed to feel bites right as soon as it hit bottom, would wait, then crank it up in a few minutes, and the bait was gone. Randy caught one pretty fast; thought it too small so released it. 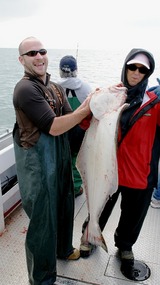 Halibut Lois caught
It took me a long time to catch one, but finally I landed a 36 pounder. Everyone on board got their limit of two fish. The two of us ended up with 47 pounds of fillets. Also saw 2 humpback whales. The first one was while we were fishing. The second one was on the way back in; saw it come up out of the water three times; the last time the tail was way up out of the water. The day started out really nice and sunny; it rained towards the end of the trip and got colder. We left at 11:00 am, stopped fishing around 2:00. Two of the guys on the trip come fishing here every year; the one was from Anchorage. They’ve fished out of Whittier, Seward, and Homer and have had the most success with this 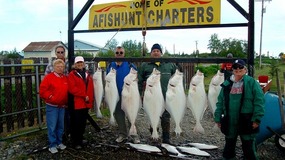 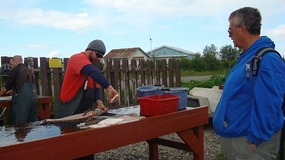 Halibut Filleting
company; every time the entire boat gets its limit. Today everyone caught quite a few more  than their 2 but released the smaller fish; about 40 fish altogether were caught. You had to make a choice when you caught your fish whether or not to keep it. Had a delicious pan-fried halibut dinner--doesn’t get much better than that!!

Wanted to spend the last night in this area on the water so we could watch the sun go down. Randy looked on line and found an RV park close to here. Drove to the Scenic View RV park, which is right off the Sterling Hwy at Milepost 127 and the nicest man came out to greet us. He had us walk down to the edge of the bluff and told us all about the park. We loved the place.