Fishing on the Russian River 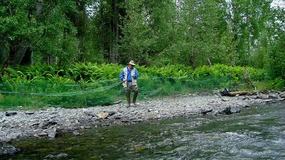 Russian River - Fishing
The weather finally got nice and sunny so time to go fishing! Drove to the Russian River Campground and had to wait in a car line for about half an hour. Parked in Pink Salmon lot and followed the trail leading to the river. Lots of people there so we walked up quite a ways on the trail next to the river, which was difficult to maneuver. I am definitely clumsy in the hip boots. 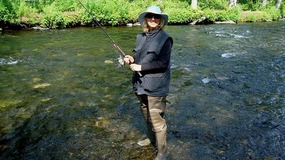 Russian River - Fishing
Didn't catch anything so moved up the river more. Several people gave us advice on how to get salmon: catch them in deeper pools where they rest before going on up the river; wait until you see a salmon; then put the fly hook in front of them; snag them in the mouth. Sounds easy enough—ha! We didn't even see a fish.

The people leaving with their catch said there were a lot more salmon up by the Russian River falls, which is a 2-mile hike. They saw a sow with 2 cubs and another big bear up there while they were fishing. They were also carrying guns. It was dinner time, started raining, so we quit. Left the river again with no fish--Darn!

Walked up a different trail than how we came and ended up in one of the campgrounds. Luckily a guy was there to tell us how to get to the parking lot.

After dinner, went up to the Lodge; the path to the river was closed at night because of bears (there sure are a lot of them around here).