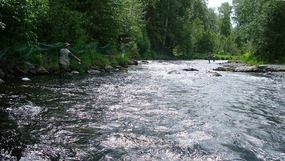 Fishing Russian River
We're determined to catch a salmon so again we headed for the Russian River. Drove to the Russian River Campground, parked in the Pink Salmon parking lot, walked across the Red Salmon campground, and down the White Trail to the river. This put us in the same place we ended up last time on the river. Wouldn’t you know, a few hours before we arrived on the river there were hundreds of salmon; solid fish from one side of the river to the other. The people that fish here all the time said they’ve never seen it like that before.

John from Soldotna and his son were fishing near us so I asked for expert advice. He showed me what to do, even had me stand where he was catching fish, and told me where to cast. I hooked two salmon but didn’t land them. I cranked too much instead of dragging them to shore. Randy snagged two and hooked 11 but no landing.

Then later in the afternoon, a guy from Anchorage gave us pointers. He stood next to Randy and showed him how to pull the line across the salmon’s mouth. You need polarized glasses to see the fish in the river.

Each day we learn a little more thanks to all the nice people showing us how to catch these darn salmon.   I kept getting caught on the rocks so we stopped at Kenai Cache and bought more tackle; have to use Russian flies on this river to catch salmon.

July 2
Today's the day--hopefully! Got up at 6:00 so we could go out fishing early. We didn’t have any line to tie up the fish we plan on catching so stopped at Kenai Cache again. Got out to the spot that John showed us yesterday. Talked to the men fishing by the steps where you come down from the trail. 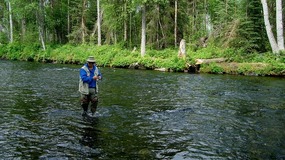 Randy landed one shortly after we started fishing—Hurray! He cut the gills so it bled out and tied it to a rock along the shore.

Then a large grizzly came down the same steps right into the river—about 20-30 feet from where we were standing. The men by the steps yelled, but I didn’t hear them and didn't see the bear. Randy and I are in the middle of the river, and I have a real problem walking on the slippery rocks. 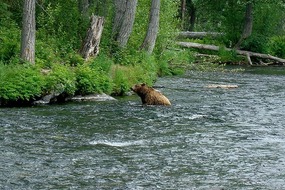 Grizzly - Russian River
Randy is just upriver from me and said, "Lois come to the shore slowly there is a BEAR next to you."  SLOWLY with a bear so near, I don’t think so. In my attempt to walk on water, I slipped on a rock and fell (nothing like making a big splash). Didn’t even notice the freezing water with a bear so close. Thankfully, the noise of river was louder than my splash and the bear didn’t even look our way. 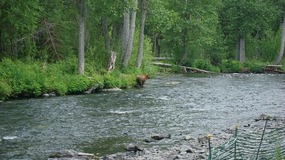 Grizzly - Russian River
It crossed the river, which is about 30-50 feet wide, went downstream away from us a little bit, tried to balance on a log and get a salmon, then came back across the river on our side by the stairs, and we couldn’t see where it went.   We decided to grab our stuff and get to the boardwalk trail, which was about 15 feet from us. As we are slowly going toward the boardwalk, Randy spots the bear walking down the boardwalk our way. We quietly headed back to the river and walked toward the steps where the other men were standing. 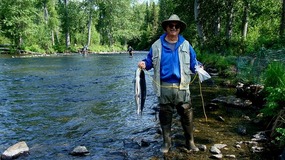 Salmon - Russian River
After a while with no sign of the bear, those men went higher up the river.   A guy stationed in Anchorage (he had a gun), his wife, and father came to fish here. He said we could hang out with them so we decided to stay. Randy caught another salmon—YEA! There weren’t many salmon so they decided to go to another spot up the river and said we could join them, but we liked being close to the campground trail. 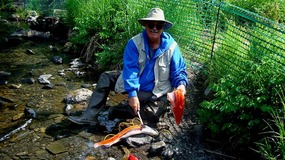 Filleting Salmon
A group of five people that live in Cooper Landing came and fished near us so we decided to stay here. They fillet their salmon as soon as they catch them. One of them said they fillet salmon different than other fish, and he filleted one of ours to show us how. Then Randy filleted the other one. They gut and fillet fish just like we do in Florida.

I was in the middle of the river, casting toward the deeper calm part where the fish swim up, when I looked up and there was a black bear looking at me from the edge of the bank. This time I slowly backed up, turned around to yell bear to the other people, and very quietly got to the bank. The five people all grab their cameras to try to get the bear’s picture. The bear just turned around and went back into the woods. I was so concerned with getting to shore that I didn't even get a good picture.

Couldn’t see any more salmon for quite some time so when the five people were leaving, we walked out with them. We felt much safer being around a lot of people with all these bear. Sure is much scarier than seeing them from a car.

Finally, after four days of learning the techniques to catch salmon, we’re going to have fresh salmon for dinner. Sure was fun being on the river! The bear encounters were not fun at the time, but it sure makes a good fishing story now.