-
FERRY TO SITKA
Our niece was first on and got front seats right in the middle. Perfect spot, especially getting to see several whales spouting, the fins of two orcas, and a bear by a stream.
What a shock to see an island with flamingos in the trees. How funny is it that someone put all these plastic flamingos there. 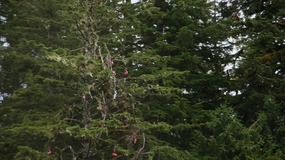 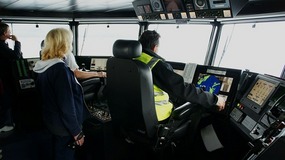 We were invited up to the bridge and it looked like the bridge of Starship Enterprise; there was even an engineer named Scottie like on Star Trek; he gets "Scottie beam me up" all the time.
Stopped in Kake and there was an eagle's nest with an eagle in it. 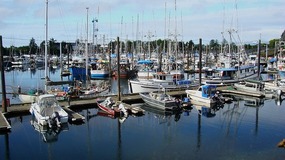 Sealing Cove
After getting information from the two visitor centers, drove to the harbor area where there might be sea lions—none.
Drove to Starrigavan Campground and Creek where people had been seeing bears; we didn’t see any. Lots of salmon coming up the creek. Most of the trails were closed because of so much bear activity. A girl riding a bike on one of the main roads got attacked; the bear swatted her off the bike; the bike landed on her, which protected her from the bear. The people that were in the area scared the bear off.
Lots of things to see on SAWMILL CREEK ROAD:
Whale Park had beautiful views of Silver Cove but no whales.
Theobroma Chocolate Company was a great stop—couldn’t resist their delicious samples.
Blue Lake Road had lots of salmon berries and a big ice cave right next to the road. The road ends at Blue Lake—a beautiful spot! 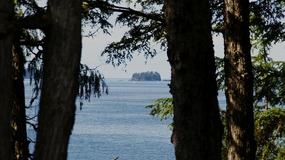 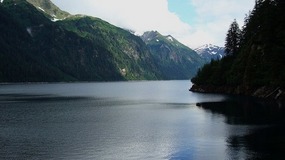 Blue Lake
Raptor Center rehabilitates injured birds of prey--eagles, owls, falcons. Great place to see them up close. Fascinated by the calling sounds of the eagles. 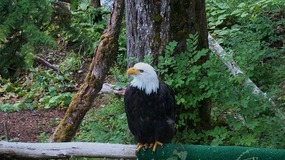 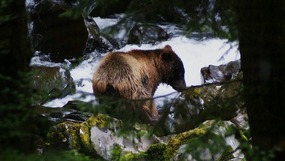 Watched a brown bear catching and eating the salmon in the Indian River that runs behind the Center.

Castle Hill was a good place to get a panoramic view of the town and harbor. Great view of St. Michael’s Russian Orthodox Church that is right in the middle of town. 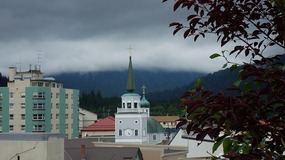 Sitka National Historical Park had a good film about the people of Sitka—Tlingit, Russian, American—each one told about the past and the present.   The Southeast Alaskan Indian Cultural Center had Tlingit and Russian artifacts and totems and people demonstrating their art. Fascinated with the craftsmanship of Tommy Joseph, who does carving, and the lady that was doing weaving. 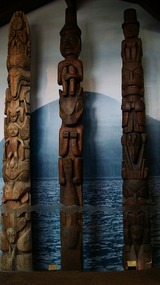 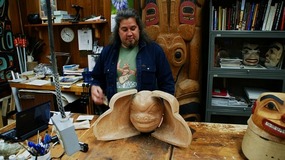 Totem Park is a self-guided oceanside trail with Tlingit and Haida totems. Great place!
Sheet’ka Kwaan Naa Kahidi Dancers performed for half an hour doing native dances. The narrative explained the symbols of the different tribes and what they mean. They even invited the audience to dance with them. 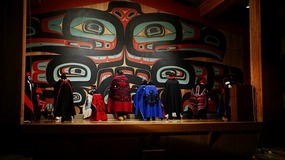 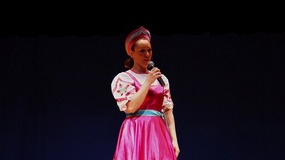 New Archangel Dancers performed for half an hour doing Russian dances performed by Sitka women in authentic costumes.
Harrigan Centennial Hall had an impressive hand-carved Tlingit canoe made from one log.
Sheldon Jackson Museum had excellent collections from the various Alaskan native cultures. 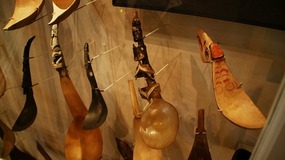 Crescent Harbor
Sealing Cove was next to the RV parking lot so we enjoyed walking the docks and talking to the fishing guides; even saw a sea lion one evening.
Some huge yachts in Crescent Harbor.
There are lots of stores to browse since the cruise ships stop here. The art in the Devilfish Gallery, which is owned by Tommy Joseph, was fabulous.
Hated to see our niece/nephew leave. Sure was fun seeing Juneau & Sitka with them!
Other Entries
-