-
G'day All,
Well i did it again i surprised Nancy, with a stay at the 5* hotel in the city called the Stamford Plaza 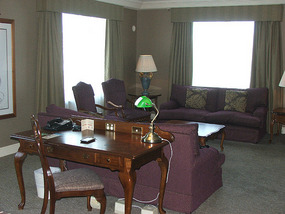 Lounge area of suite
. This hotel sits right on the edge of the Brisbane river and at the entrance to the Botanical gardens, both of which went under in the floods, the first 3 floors went under in January, we stayed here earlier in the year when we went to a function in town as it was a good price and saved a taxi fare home (my excuse), so with us both celebrating out Birthdays with in a week of one another i decided that i would treat her to something special.

I was thinking what to get Nancy for her birthday when i was looking on a discount hotel web site and spotted the Stamford had a good deal going so i looked on their web page and it was the same deal so i decided why not and also when we were there last time the P.A to the chairman had recommended the Kabuki Japanese restaurant in my Trip advisor review, so i rang up booked the hotel and it included buffet breakfast next day, also asked if i needed to book the restaurant and the girl said i would advise it so i asked to have it booked and she said the hotel Catering Manager would be in touch 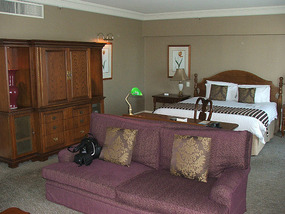 view into the Bedroom area
.

The Manager rang about an hour later and i asked could we have the Teppanyaki dinner and he said i am sorry sir but that is booked out months in advance so you may have the Al Carte meal instead, so still will be a nice meal so all plans were booked and sorted now to keep my mouth shut also i invited a cousin and his wife and my sister and her partner but she could not make it but that was ok when the cousin found out what i was doing he booked a room as well, so all was in place.

On the Thursday before the weekend i received a phone call from the Manager saying there had been a cancellation and he could fit us into the Teppanyaki dinner at 6pm so i said yes that would be great, so all plans of mice and men do come to fruition sooner or later, now for those not familiar with this Teppanyaki it is Japanese for "who flung the food" the chef cooks your meals and throws his implements into the air and some food at you as well, 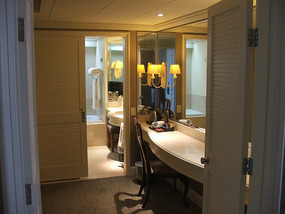 On the Friday morning when i got home from work i waited till Nancy got home from shopping and said oh by the way you will need to pack an over night bag and have good clobber (clothing) ready for tomorrow night, with a big grin on her face where are we going and i replied cool as a cucumber "if i tell you i will have to kill you", so off i went.

The morning started out nicely blue skies but as the day got on it was starting to cloud over damn i thought all we need is a storm, but it stayed fine and after lunch we got ready and into the city we went finally close enough i said do you know where we are going an she said yes the Stamford.

We pulled up and i handed the car over to the concierge and headed in side to check in, The desk clerk said welcome back and yes we have your room ready then i sprang the surprise i said to him is it still possible to upgrade to a Junior suite and he disappeared came back and said not a problem will upgrade you and i hope you enjoy your stay

Bathroom
comment
. We got up to the room and wow well you walked into a little entrance room and off that was the dressing room and bathroom both big enough to have a party in, we then walked into the main part of the suite and the lounge chairs and chairs were up one end of the suite and down the other end was a huge king bed and then the view well man it was amazing you had full views both up and down the river, the little coffee table was well worn with being polished but to me it added character to the room you know how some rooms are so sterile you might as well be not there this room had character and feeling.

Later we met our friends and went for a walk and a drink up near the river and we were still marvelling that how just under 9 months ago most of the area's we were walking in had been under water in the floods and how these business's have bounced back and come out fighting, after the drinks it was time to head back and get ready for dinner it was then that i revealed to Nancy that we were also going to have Japanese Teppanyaki for dinner at 6pm 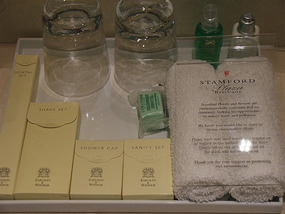 Well what can i say you have to experience it to get the full feel of it our chef was great he laid out all his plates and meats etc and got the grill going so it would be hot then he served us our prawns and to watch him slice dice them was amazing so quick. As we were eating the prawns he was getting the other things ready when out of the blue he produced this basket of eggs and dumb me was thinking hey we did not order any eggs, it then was revealed he was asking each of us if we wanted an egg and again stupid me said yes and next thing you know we were handed bibs and a bowl he started at the other end of the table then switched to the middle back to the end finally it was my turn and i can tell you my knees were shaking here i was going to prove to every one that not only i can't catch a fish so what chance do i have of catching a raw egg in a shell and a little bowl no bigger then the palm of my hand, well the moment arrived and with baited oops bated breath he flipped it to me and in slow motion i could see this egg flying up up up and then closer and closer and closer then descending down towards me and this minuscule bowl my heart was in my mouth my tongue was under it and i was saying don't drop it don't drop it

view from window of kids doing stunts
. Well i can tell you this in all honesty people it was the most amazing thing you have ever seen my arms shot out straight as a dye and with clear precision i launched it towards this falling object, with a sharp crack and a thunderous applause i had caught the egg not only that but the bloody thing had a smiley face on it and it was grinning up at me.

so now i can catch eggs he decided the next feat was a bowl of rice, so again we were all lined up and when it go to the bloke next to me he fliped his empty bowl to him and we looked then next thing he had another 5 bowls lined up and flipped them to this bloke as he caught them, finally after 13 bowls he flipped the bowl of rice at him and he caught them all. I was thinking clad it was not me i would of had bowls every where, it was my turn again i was with trepidation thinking ok u got the egg this is a bowl bigger and better so when he flipped it to me i caught it no worries at all, then he picked on my mate again this time he turned the bowl upside down and emptied the rice out onto his flipper and tossed the bowl to my mate he had to catch the rice in the bowl, well full points to him he did it to every ones relief and his.

The night progressed and it was awesome i can tell u well worth it an very entertaining the chef lit up the plate so we had a huge fire on the grill it was great, so with much fun and laughter we finished our meals an headed back up to the rooms and had a chat and some coffee and then bed what a comfortable bed you sort of sunk into it with out sinking, next morning we went down for a leisurely breakfast, again it was fantastic.

Nancy is lucky to have you Steward. Yes, it sounds like you really had fun.
I can’t remember of any similar surprise happening to me besides the surprises I do to myself. I was always the one who would book a flight, and arrange for hotels. Yianni was the one who paid for the food and excursions though. Now, I managed to have these beautiful surprises for free, and I have 5 hotels at this time expecting us to go.
Plus free dinner outings at the restaurants that I pick myself.
I believe this is something isn’t it? Probably God has always known how much I loved all this and since I had no one to offer this to me, He does it to me now.
I am very thankful.

it is good you can do it for free Popi and maybe he is saying this is your reward :)

The funniest of all is that Y instead of being happy, he is sick and tired of this.I am telling him that other people pay to get there and they would jump from happiness if they were to go for free. He does not appreciate this at all until I get some money and this makes me sad but angry too.The same goes with restaurants....! Sometimes I am fed up.

Hey Stewart. That would have been a terrific surprise for Nancy. I glad it turned out so well for the both of you xx Happy birthday to you both xx

that sounded quite a cool night out, and even entertainment during the mwal

Hope Nancy enjoyed the surprise and her birthday

thanks Carolyn she did and was pleased as punch and derrick mate it was a top night out we had a ball.
Popi some times it can get wearing i know by the time we had done the round the world trip we were glad not to be living out of a suitcase and could relax in our own home, and i hope you do get fed at the restaurants ha ha and will look for your next blog