"Where young people go to retire"

-
Portland, much parodied but probably not seen so often. Nowhere near as much 'authentic grit' as I thought but damned pleasant, yes I WILL have another top beer with my terrific street cart vegan organic local hand-raised nuclear-free burger thanks. 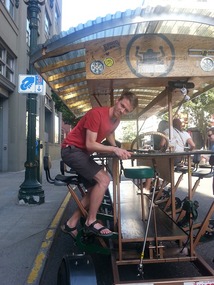 Brewcycling
. He's traveled to a lot of places so I should probably listen to him. Woke up after being conked out on the sofa bed for 9 hours. Plan: catch light rail into town, muck around, go on walking tour that features beer. Got cancelled on, so a booking on the Brewcycle (pic) instead - no pretense of learning, bike the giant machine to bar, get quality cheap brew, repeat. Prior was a different walking tour without the 'airbrushed' stuff - done by enthusiasts who use it to fund multi-lingual community magazines and homeless services. Heard about historic racism against...whoever you've got, particularly bad against Japanese WW2, internment/concentration camps, a blight on all involved. Some god-awful public art around as a result to try and commemorate.The black mob boss did extreme well for himself however.

Khoi reckons I shouldn't waste any time in London but I disagree so I'm not listening to him any more.

Day 2: Road triiiiip. To the Columbia Valley for what the north west does easily, that being rivers, waterfalls, gorges and the odd vista. Beauty of a place, stacks and stacks of hiking to be done, often with the backdrop of Mt Taranaki-wannabe Mt Hood. Also featuring a to-scale Stonehenge replica because...human sacrifice (not true) at the original struck a chord with one guy reWW1. So yes.

Day 3: more mt Hood. Up at 6am again because the trails get crowded and its going to be close to 39 degrees. Terrific views of FOUR mountains with Washington's Mt St Helens (huge eruption in 1980) right in the background many hundreds of kilometers away. No bears but some squirrels. Down to Trillium Lake for some sweet as swimming. Marijuana legal here so a bit of that just casually floating around some groups...coincidentally or not, pretty chilled out.

Day 4: outta here. Check out ANU rival Lewis and Clarke College (much picturesque) and grab some more super duper baked goods for what turned out to be a looong train trip...rails too hot, 40mph are you kidding me. Picked up by legends Romulus and Elyse Apolzan to their place in downtown Seattle and it's terrific - even more the rooftop beers...was tired but not too tired for that.

Host rating: Khoi was generous, considerate, helpful - an absolute champ but overcooked the pasta that one time: 8/10