-
Brief sojourn to Whistler first, a few hours up the road from Vancouver. Sit down next to a Kiwi on the bus, Candians think she Scottish or they can't understand her at all. Whistler is as thick with Aussies as the legends say, further proven by the availability of meat pies.

Lots of cloud and a bit of drizzle around 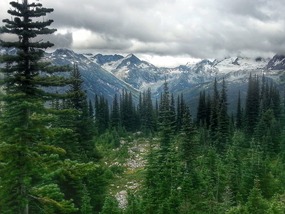 Ahh yes the mountains
. Not great. Go up the mountains anyway, probably worth it since I've hardly ever been around the snow I.e. I am easy to impress. Fun, but the 4km peak-to-peak gondola was crazy...just throw a few cables over an enormous gorge and away you go. I'll come back IF they put a zipline in. Cold, windy and cloudy at the peak tops but what can you do.

Rookie move of the day: worrying that the brown mossy stuff by a tree was bear fur. Nah, moss.

Everyone in this part of the world is just basically nice, and everything is easy. Supposedly the weather sucks but that's about the only downside.

Can't see the bottom, can ya?
. China on display tonight and sparkle-sparkle reasonably well coordinated with the music but really how hard could it be, ha!

Vancouver Aquarium just the spot to start. Weird fish, frogs, bats, sloths, tales of 'sea monsters ' and some freakin' BELUGA WHALES. Many animals rescued and unable to return tothe wild. separately i also have photos of myself with local totem poles (depicting interesting creation myths of thunder birds and giant bears and whales and such) and more quirky...'laughing Chinamen' ? artsy stuff and a steam powered clock located in Gastown, named after Gassy Jack of course. Georgia thinks she can walk me into the ground but shes wrong. Walked along the longest bar and eating strip ever seen after taking a trip up the Vancouver Tower for some views.

Last day (flying visit thanks Whistler), off on my own to ride around the Kitsalano beach and Stanley Park shorelines. All beautiful, all the time. Not the warmest water but what can you do.
Long trip up Grouse Mountain on the other side of the harbour...would've been much longer if I'd done the Grind and climbed, but I felt like I wanted to enjoy myself so I took the gondola. 1200m up the views don't get much better. Back for final Indian meal with hosts then bed for early flight to Montreal.

Best 'character': elderly level 5 hippy at the Naam vege cafe, all flowing robes and a beehive haircut (is that the word).

Host rating: you're lucky we found those raccoons 9/10