-
Montreal airport/Pierre Elliott Trudeau airport (PET apparently means fart in French, very suitable for that guy apparently)...everything is in french (montreal is pronounced mor-ay-al, who knew) with English subtitles. Not sure whether to be surprised or not? Got an AirBnB place in the Westmount neighborhood with a woman named Melissa who runs one of the top food tours in Montreal but has she decided to fly to Vancouver while I'm here, yes. Half the point of AirBnB is having a host so kinda pissed off. So it's me and the two cats then. Decent place, nice neighbourhood near a metro station. Flakey cats.

Always do a walking tour 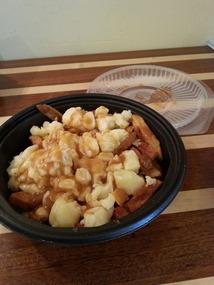 Gross looking but terrific Poutine
. Montreal has a large 'Old' area by the port started by the French when they ran it and uh later most of North America? Originally just a fort to keep the Iriquois from killing them but eventually got a treaty in 1701...which apparently the French did a lot of...quite peacefully...maybe need to check that. The Brits took the city which brought a lot of enterprising traders in, city peacefully split for a long time, any statue of say Admiral Nelson would have to be matched with a french equivalent and so on. Brits named everything after Victoria.Stuff got fun during the USAs prohibiton era. Stuff got CRAZY in the 1960s and 70s when the military occupied the city in response to independence-related unrest, and ~300,000 actually left during this period, including some major businesses. Couple of tight independence votes since then but apparently everyone's a bit tired of the whole business and they seem to be doing pretty well. And they have some swell looking buildings. History museum Point de Caliere also visited because it's SO HOTand they have air con. Lie around in a seaside park with the locals for a bit. Historied out, home to the cats.

Smartphone here is 'Supertéléphone' har har. Everyone speaks english but trying not to be possum in the headlights when they say greet me with more than 'Bonjour'...managed to use those old French lessons to some effect...eventually. 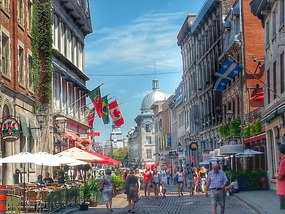 The Old Port / Le Vieux Port
. Hang with the cats for a bit then out to the Biodome i.e. zoo, adapted from the 1976 Olympics. Many penguins, birds, caimans, sloths, a GIANT porcupine, and about 8 million ***** children. Sloths not doing much so staff equipped with ipads with great photos whichwe can then take a photo of, what -the-what?! Well done but not that much there really. Hop on the metro to climb Mont Royal. Downpour. Go back down and I dont know how to get up exactly anyway. Must find poutine, follow Poutine Pundit's advice and get the best in the city from a fish & chip shop next to the 'multimedia quarter' (lots of movie visual effects are done here) of the city. Delish and not even bits of meat in this one. Keep walking and get sassed in French AND English by someone who wanted money. One of the poutine shops in the entertainment districts has a BOUNCER to keep the drunks out at closing time. Serious business. Right, ice cream in Quartier des Spectacles, 1sq km jammed with performance venues. Knackered, will take lying on the embankment and some photos of lit up buildings for now 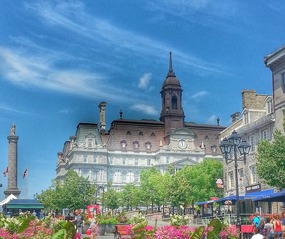 Friday. Big Osheaga (means 'shaking hands' which the Iriquois thought the French did a lot of) music festival later, but why not take a few hours to climb the mountain. Pretty class-y houses on the way. Great view plus a drunk at the top...how did he even get there...well whatever. Rest. Great fest, tick off Angus and Julia Stone, the Kills, Avett brothers, Chet Faker ('Shet Fakker'), of Of Monsters & Men, and some sort of singing hurricane called Florence & the Machine. Getting out via one subway line wasn't fun except the guy who managed to get a date in the middle of it all. Oh and passing buskers singing 'Come Together' with the help of a few thousand passing concert goers, amazing.

Beer tasting tour, beats all the walking I wad doing before. One bachelor party and one hen's/Bachelorette party + me. Good bunch and two girls surname Rowe so buddies for life. Indigenous First Peoples Festival in the Quartier, stroll around old port 'taking in the vibe', Montreal done.