-
When a newspaper editorial is on the excessively high number of stretch limos you're somewhere maybe a bit different. A bit less scary than 2009 when this wide-eyed Kiwi made an entrance into Penn Station and then above into literally millions of people, still a bit of a shock to the system. On the subway to the hostel, a guy gets on equipped with a small bag and an article about how his face was melted by acid, somehow. Don't normally give money to beggars but he gets some.

Terrible photo but good times on the Hudson
. Think warehouses, graffiti, organic food shops, bars, truck parking lots...and more warehouses. The warehouses often inhabited by artists pushed out of the East Village in Manhattan - can easily see the tarps in their workshops from street level. The people who aren't tourists have been getting tattoos like it's going out of fashion, and are basically never older than their mid-30s. I gather from the tours and other conversations that Brooklynites accept they're part of New York, but see themselves as REALLY different from the money and status-obsessed Manhattan dwellers - something to do with authenticity. Either way, everyone I met seems pretty swell. 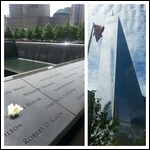 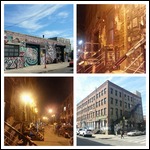 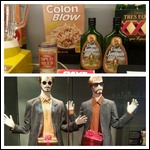