-
Managed to fit in a trip for couple days to see old 'I have no money so picking apples in Napier is a good idea' friends Iris and Pierre Olivier up in Deepest Quebec. 5 hours or so from Montreal, past Quebec City which PO showed me and of course it's all charming and old and things. Has the only fortified city centre above Mexico maybe because theyre always ready to secede? Anyway. 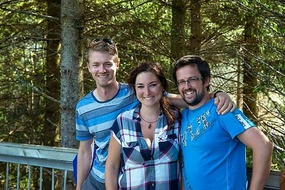 Le Napier gang reunited
. EIGHT years and they're still going strong and still have the same self-amused difficulty saying the 'h' in hamburger. Took the scenic route in the hopes of seeing BLUE WHALES!!!! which are not uncommon but a bit dark for that. Lots of colourful houses that look like they could handle a blizzard or two as well.

Met iris's dad, amused all by giving him the opportunity to speak English which is a bit of a lark round these parts. Muma Iris later too. Quebec Zoo...really a large park. ..yes another zoo but this was everything Arctic, your moose, beavers, bears, skunks, racoons, polar bears, siberian tigers, bald eagles, caribou otters and all the things - terrific. 5 hours back to Montreal with both of them who took the opp to see Iris's sister.

Would go back to this part of the world, just not in Winter which sounds catastrophic.

Host rating: took so much time to help me and was so happy to see them after eight years so 11 out of 10.