-
Castles! Cobbled streets! Churches! Really old churches! Eight million pubs! Deep-fried mars bars! Huge crowds, 700-odd shows a week of every different kind in every kind of venue. What is not to like. Favourite city yet but maybe only becaus the weather was amazing? Even without going to any moors, heaths or highlands it seems obvious this part of the island has that sort of 'bleak beauty' (cliche alert but I don't care).
Great shows:- Good old improv shows, if you can tie together a scenario about a guy who is really three dwarves in a man suit with yokels and aliens with a few pop culture refs you're doing well 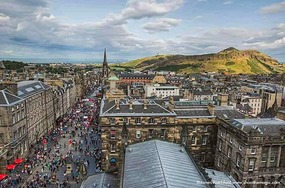 The Royal Mile (not my photo)
.- A Daily Show producer who included an "abortion portion", her favourite anesthesiologist Bill Cosby and as a jew her dating of Germans for reparations. This is the show where you really know you're doing the Fringe because edgy right?!- Literary Death Match, where authors read for five minutes and then judged by comedians for the right to a...author's name spelling contest final. How the woman who wrote a chapter on 50 Shades from the cat's perspective didn't win I don't know.- stand up in a 'cave'- painting projected on to a school quad, the pace and style tied to a percussionist.
Decent: traditional scottish story telling, Jeremy Corbyn's chief of staff (did not know that) on 'hope' and likely enemies; fictionalised perspectives on loneliness (oh deep)
Blah/bizarrre: some jazzed up frantic piano duo (reviews were amazing but still, piano), twisted routine of a performer pre-show (cocaine, goblin-like friend, smeared lippie, deliberately awful routines); posh fella heaping scorn on 'authentic' pretensions 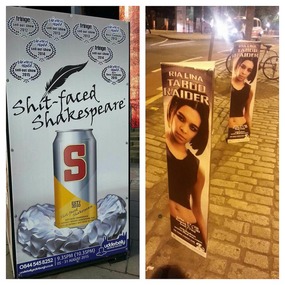 Bit of a variety
. Wacko with a keyboard on the street. No regrets.
When not at shows was climbing anything at all - ancient hill fort/volcano Arthur's Seat for a hike and the Scott Tower in memory of a writer who 'brought Scotland to the world'. Regret not getting to the unfinished Nelson Monument that Robert Louis Stevenson thought “ranks among the vilest of men’s handiworks” which sounds amazing. Some pubs also.
Walking tour included a story about the English not giving back 'the stone of destiny' underneath the royal throne, so some Scots broke in to Westminster Abbey to take it back. Extremely heavy. Broke it. Escape with the stone only for borders to be closed. Not caught exactly but eventually they got it back properly, 700 years after it was nicked by the English. No mention of alcohol but I have my suspicions.
Other Entries
- 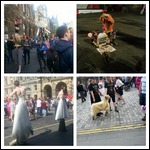 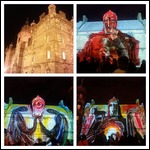