-
So, the reason Berlin sports teams suck so much is all the hippies who moved here in the 60s onwards to avoid compulsory military service, and everyone knows how much they hate sports. This is amusing and relevant because of where Berlin sits in amongst the other German cities - it's where you go if you want to escape from the rigidity of the other parts of Germany...LIKE THE WAY THEY MAKE BEER. They've been making frickin' Pilsner for years and that's about it because of the stupid beer laws. But at least they can semi-ignore it now through a mess of complicated regulations. Don't even get my beer-tasting tour guide started. Also runs tours where you go to an anti-fascist brewery...next time.

Lots of history around WW2 and the cold war, and massively tolerant public drinking laws most especially tested by the Friedrichshein pub crawl which was a bit of a blur and featured a feeling of impending doom upon hearing the deep voice of a train station announcement at 4 in the morning after getting a bit lost but Google maps sorted it eventually *Breath* Easy place to live, bike, move, breathe and par-tay if thats your thing 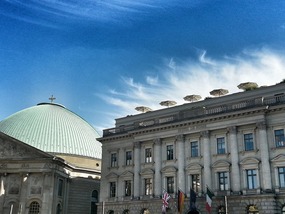 How do I get to this paradise
.

An almost featureless city physically...the only way to orient yourself might be the giant East German tv tower but thats it, even the small hills were made by post WW2 rubble, with bonus artificial waterfalls. And guys selling beer for cheap.

Awesomely Picked up at airport by Katja a whopping eight years after meeting in Napier. Taken straight over to a river for a coffee catch up and then to a whopping great Soviet war memorial/cemetery in Treptow Park - they loved memorials the Soviets but only for those 'politically correct' enough, though dead soldiers (20-30,000 in Berlin) is a no-brainer for everyone. In conclusion the sword-wielding soldier, adoring child and smashed swastika is totally badass. 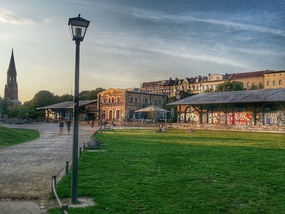 Gorlitzer Park weirdness
description
. Sachsenhausen Concentration camp was distinct from places like Auschwitz in that it wasn't an extermination camp, but still operated with a similar level of brutality for the inmates who were mostly there to work. Significantly it was an experimental  camp where poison gas and other industrialised murder methods were pioneered. Returning survivors didn't notice so much the demolished buildings but the lack of fear or terror, the noises and the sounds. A few hundred thousand stayed there over the years, with about 10% dying/murdered. Guards could quit with very little fuss, because if you couldn't give 'being a monster' 100% then you weren't wanted. Later, instead of the Soviets just choosing to preserve the remaining structures as a memorial, it was decided to have a memorial site that would symbolise the 'victory of fascism over ant-fascism' because again, self-agrandisment was big for the soviets. The monument has the red triangles of political prisoners' uniforms but no mention of anyone else. Prisoners of the Nazis who returned comment not on the lack of buildings there now, but the lack of smell, terror and fear. Could go on but shouldn't have to. No one vomited and only a couple of tears.
Other Entries
- 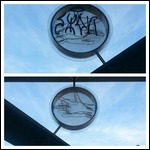 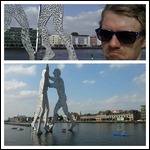 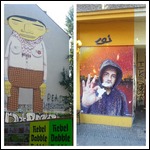 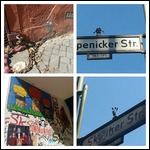 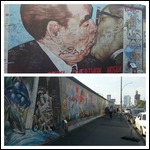