-
The only thing I didn't like about Paris was that almost every time I tried to start a stilted conversation (well to buy something anyway) in French, they'd turn it into a pretty fluent conversation in English. Inconsiderate. Otherwise pretty nice bunch. First impressions were mixed as I suppose around a lot of train stations there are a few vagrants, and it was very busy at Gare du Nord but Google Maps sorted it all out so I could get to the hip-hop-est hostel ever - neon lights outside, bouncer on the door, techno background music everywhere, no outside food/drink allowed, hotel-like lobby 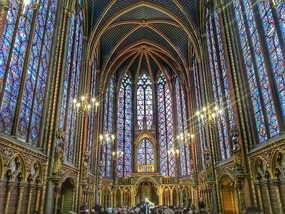 Saint Chappelle for Vivaldi performance
...it's basically a hotel with some dorm rooms in it. Weird. Writing this on a train fresh from the countryside of Normandie, Paris' quality of being a 'bustling metropolis' is really accentuated. It was a relief to smell grass and have a bit of space after a week in the city, but wasn't really aware of the bustle when I was there. Paris certainly has a 'tasteful' quality via its architecture (Napoleon basically knocked the city down in the 1860s because it was kind of crummy which he felt heightened people's 'revolutionary tendencies') but the lack of variety is noticeable on reflection. It is hereby 'pretty beaut'.Factoids:- No one gave a crap about the Mona Lisa until the early 20th century when an Italian cleaner stole it from the Louvre because he thought it belonged in Italy...someone thought Picasso might have done it so he was investigated. Big names (Da Vinci too of course), big fuss, found years later in someone's apartment 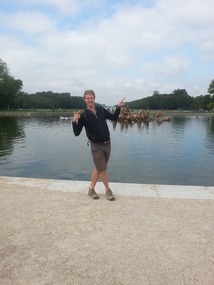 Louis XIV pose-down comp. No winners.
. Boom.- in 1944 Ernest Hemingway convinced the US army to liberate his favourite bookshop and then the bar at the Ritz.- Versailles' Kingly inhabitants story is basically that of debauchery and taxing the hell out of the poor- Carvings of Kings from the bible on Notre Dame were pulled down during the French Revolution so people could piss and poo on them...they may have thought they were the wrong kind of kings.-I don't have the name somehow but one famous French painter was quoted as saying he would not be a painter if it wasn't for the ability to paint naked women...which sounded sincere and arty the way he said it so hey I believe'im.Paris was a semi-solitary exercise, outside of hanging with people on various walking tours which was a ton of fun, especially the Selfie Squad formed on Day 1 which ended with a visit to some back street Montmatre restaurant to be serenaded with the incomprehensible covers of the French folk singer Jacques Brelle. In between a bit of exploration, wine & cheese ('OMG they give you free bread?!'), first Eiffel Tower sightings and general larking around. Roommates always busy with their own thing, like the Polish guy bringing progressively more produce and paper towels into the room every day...he had a 3D camera though so hey, impressive.In contrast to the underwhelming Mona Lisa (fully expected) the Eiffel Tower was magnificent 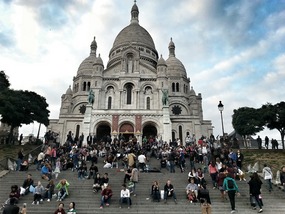 Sacre Couer on the hill - waiting for sunset
. A French writer used to have his lunch there every day because that was the only place he couldn't see it - in the end it was only saved by its immense usefulness as a radio tower. Took photos from seemingly every angle and time of day of that thing. Otherwise yes:- The Eiffel Tower is amazing, especially especially at night. I would have taken about 50-60 photos of it from all angles and locations. Just because. - The Louvre is worth a look but no more unless super keen - everything is huge and old with much deep and serious meaning but there are only so many paintings and statues of Greek/Roman gods, mythical figures and Napoleon that one can take. There weren't even THAT many people taking photos of the Mona Lisa which was disappointing. Still, was worth a look for four hours of my life. Highlights 'Raft of the Medusa' for having just a bit of a go at the royals, and 'Liberty leading the people' because liberty is awesome 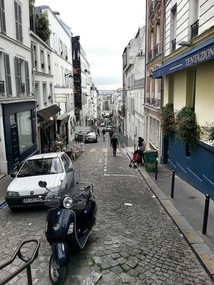 Streets of Montmatre
description
. - Everything on the banks of the Seine river is awesome...especially at night. - has charm up the wazoo, they've obviously heard about Melbourne's 'small bar' thing (kidding?)Walking tours around a few neighborhoods like Montmartre, the Latin Quarter and Belleville were great for getting a bit of local color (sometimes the drunk telling us about his favorite street art, sometimes the locals just chilling stylishly) and some stories - Hemingway, Picasso paying for food with napkin doodles and paintings later worth millions, Van Gogh being an absurd and tragic failure at everything, debauched royals who 'probably deserved' the guillotine. Favourite museum/gallery thing: Musee D'Orsay, with its 'impressionists' capturing "fleeting moments" of activity and light, with what looked like carelessness by the original critics of the movement. Nice work. A guy called Gustav Moreau stacked his house with his and other artworks which is now a museum - they're a bit surreal so a sort of runner-up.
Stuffed with pastries now, mmm cholesterol. Food pretty good but maybe lacked variety...what can you do. 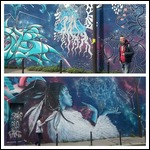 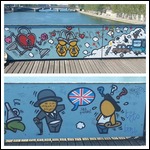 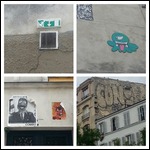