-
Going to Lyon came about mainly from the desire to go to le famous French/Swiss/whatever Alpes in the east of the country, on the way south towards Nice 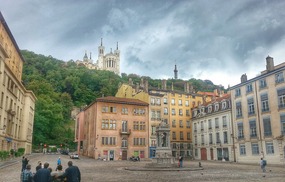 Place St Jean
...'France's third-largest city there, might as well go and see'. France's 'gastronomic capital' too even though that's sort-of just code for we-cook-all-the-meat-types-and-more there should be a bit to eat and do, then go to the mountains for some hiking after.

Good points: - great bakeries including the praline pastries (I still don't really know what that is...some kind of tart strawberry thing?); - has an 'old town' that is picturesque as hell, including a Basilica looming over everything on the hill;- easy walking- great small hostel + great people. So many seemed to speak a fair bit of French, often because they were actually moving to Lyon to study or work, so spoke a bit already so hey kind of like Parisians who speak both languages.

Bad:- people running kebab joints sometimes looking at me funny when I ask if they have fallafel kebabs because why would they have that? In a kebab? So dinners pretty bloody average pizzas or sandwiches when I could get them except for a fallafel-y last night 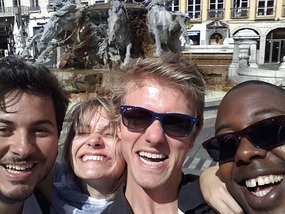 Historic site ruined
.- some genius deciding to put a replica of the top of the Eiffel tower on the hill next to the Basilica. Reeeeeal original.
- stupidly ordered a croque with meat in it, pretty much just ate it or a bit of a waste. Vegetarian hell here I come.

Apart from a high-on-architectural-detail low-on-amazing-stories tour that at least showed us the weird passages that go through/under the city to picturesque courtyards/sewers used by the French resistance, everything pretty solid. Went with various posses of south africans, americans, argentines, Latvians and germans (let's see amu, claire, russell, juani, linda, miriam) to:-

a roman ruin,
- the Basilica (including amazing theory of nautical artwork on the walls as being possibly the Battle of Noah's Ark),
- medieval city of Perouges though nearly blown away by the wind- Museum of Deportation and Resistance (the Nazis deported captured Lyon French resistance fighters to concentration camps after interrogating and torturing them

Lyon
...the head Nazi Klaus Barbie was tracked down and extradited from Bolivia to face a huge public trial in 1980s Lyon where he was pretty unrepentant). 'Yes it's in English you just have to read it from this little book we give you though'. Revealing stories anyway mostly about how Lyon was a political centre for the Resistance rather than anything too military - newspapers, politicians etc.-
Miniature museum of film and miniature models and costumes used for films (or something). They first patented film cameras here so why not. Crazy models and costumes built for filming Alien, Independence Day, Top Gun, Hell Boy and basically the set of Indie/foreign film Perfume. Highly precise AND a bonus room of creepy dolls a guy has been making for years. Also Harry Potter's 'Baguette Magique' which is a hilarious French term for 'wand'.
- Visited the very architectural 'Confluence' district to see either shiny buildings or ones that look like they'd been blown up.
- Biked over to the giant park, saw a zoo, and popped into the cheerfully absurd (my words) contemporary art museum. 20 speakers playing 20 different things; rubbish on the floor; a telephone help line that will never help you, all with helpful explanations that you need a Sociology PhD to understand.
- also general groovy-man backpacker hanging out and wandering around. How do I even write this - "kid appropriate" BDSM place...have been tainted by association because someone didn't want to be rude about staring into a certain shop window...That'll do. 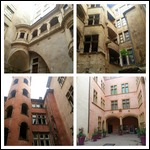 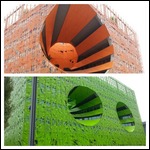