Getting somewhere I don't know, at midnight, in the cold was never going to be that easy, but when the bus driver makes a detour to your hostel on the edge of town it makes it a whole lot easier 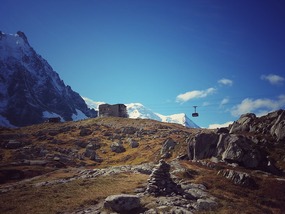 Journey up to the Aiguille du Midi
. And having a torch on my phone to get up a long and rocky mountainside driveway. Brought back to earth from the flashy cities with an old-fashioned hostel without an ensuite, bed lights, music in the lobby, a lobby or even staff outside of a few hours in the afternoon. Space for skies though.

1) It's raining. Crap. Walk to town. Tourist office doesn't know anything about hiking trails except how to sell me a map and giant overwhelming and vaguely worded guide. Attempt planning and staying dry til late afternoon when looks like a break. Hike up moderately difficult hill with occasional view of glaciers and mountain tops through the clouds. Desperately take photos even though surely rubbish. At the top is cloud and some sort of hillside zoo for deer, goats and nervous marmots. Had to leave quickly due to sunset and closing time. Not the best day but cool to be somewhere different.

2) Spectacular weather forecast for about 4 hours. GET UP and zoom to 'Aiguille du Midi' - mountain 3,888m up (half the reason I brought a second sweater with me), with views of Mont Blanc which is the highest in Europe 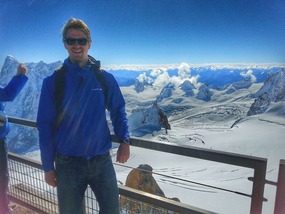 Aww yeh mountains
. Just get in the gondola and go up. Spectacular enough. Probably the coolest surprise was reading about the stuff people do on the mountain (many types of climbing, tightrope, parachuting, parachuting off the tightrope and can't remember the name but you suit up and jump off the very top of the mountain) and seeing one of the latter fly past as I was exploring the halfway station. Unexpected. Watched some parachutists jump off and then a leashed labrador attempt (?) the same. Cracked a joke IN FRENCH with the owner about the dog being a bit confused about whether it's a dog or a bird. Quietly pretty pumped about that. Finished all that and was going to do some other hike but seemed pointless after going that high, so went for a stroll around the valley and hey I was tired anyway. Got home and chat with roommate about the Tour de Mont Blanc, about 10 days hike around the valley. He did Everest Base Camp and was passed by British Army members doing it as a 'relaxing wind down' after Afghanistan tour - kind of like batty Israelis on NZ hikes. Tour sounded epic (and some others) but might need to get fitter.

Cool time but probably too short.
Other Entries
-