-
Contrast between the Alps and Nice - massive, obviously. Wooden chalets and mountains vs cheery apartment buildings, alleyways, sun , leathery skin and the beach. Got in mid afternoon aaand got a bit snap-happy, because EVERYTHING is beautiful? Seemed like it -walk around the corner oh there're some colourful old buildings...blue sky...fountains...beach...pretty simple really. Go up the hill for a view, everything amazing again, this time with orange tiled roofing and sea views so really double the fun. At the end of it all, the beautiful region I've seen hands-down, and I walked the guts out of it so I reckon I'd have seen anything shabby, which I guess there probably is...somewhere. Well except for the 1960s interior of the hostel which once resulted in a dodgy door locking someone in our bathroom. 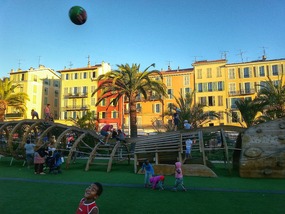 Nice at dusk - only cos of the kid!
. Val the Italian hostel owner and his cat Victor were great even if Val tried to take Josie on some romantic dates which was taken in stride as only slightly sleazy and otherwise just 'European' - girls get approached here all the time for what sounds like all things on the helpful-sleazy spectrum. I got an arrow through a heart on my cafe bill once so you could say I'm fighting the good fight too.

Sounds like hell come summer - up to 40-some degrees and hordes of tourists. Apart from a few dinner excursions(with aussies), expat bar for the All Blacks v Argentina and hostel table chats over some cheap, cheap bottles of wine (more than 2 euros, less than 6) it was a walk- or hike-a-thon of exploration:

- Monaco: spent a day trying to figure out why anyone would want to live in this jam packed little city apart from convenient access to your mega-yacht? Whatever. It was getting ready for the annual Yacht Show so a bit more frantic activity around the harbour than usual, maybe. Great views from up around his Serene Highness' Palace, an actually serene public garden good for napping in and taking photos of ocean too 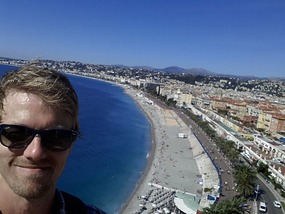 Day 1 amazingness
. At the other end a pretty stylish casino with all the usual cars out front.

-Cannes: yawn, just some beaches and giant apartment blocks along the waterfront and tourists taking photos of the events centre where they hold the film festival (for people who know people). Pretty enough.

- Hiked the Antibes and Cap de Ferrat peninsulas for just great coastal views, although massively windy for a time in Antibes - saw a yacht that was shipwrecked (?) as a result. Took a few dips along the way of course. Started reading 'The Grapes of Wrath' because it's famous or something, after 'I Claudius' because going to Italy.

- Got to an immaculate Franciscan (monk robes!) monastery garden with views over Nice though not before going into their museum pretending to be interested but really looking for the best views. Got there eventually. 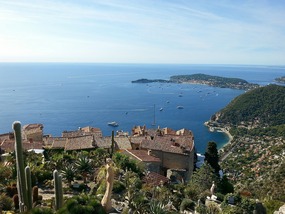 Insane view of the coast from Éves
. Stunning. Bussed there and after walked down the hill to the beach, not before meeting an older couple in their best clothes hiking up with bags of wine and other goodies. They looked tired but apparently live on the mountain so I guess they like the experience somehow.

- walking tour explained that the cannon fired at midday was started by a British aristocrat who's wife was always late for lunch, basically an alarm clock; got delicious socca (chickpea pancakes) and eh not much else on that?

- Played Oinga (Italian Jenga) with red wine and dodgy commands for every piece, so got to know some things I'd maybe rather not know about other people and kiss my first Italian (man) (on the cheeks).

To conclude: beautiful in a spectacular way, easy living but that's about it....which will do nicely, especially after doing some india and turkey planning last night (yes it's probably not that bad but still).
Other Entries
- 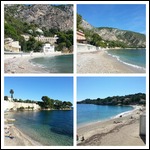